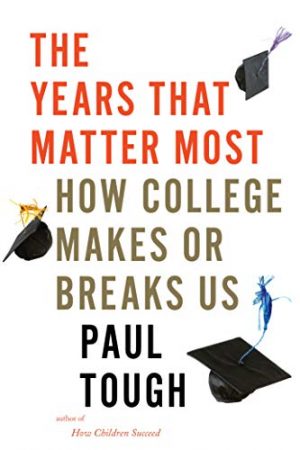 Inflection points matter. They’re the one time when a left turn really matters from a right turn. Paul Tough’s thesis is that “mobility in the United States today depends in large part on what happens to individuals during a relatively period in late adolescence and early adulthood.” More specifically, he believes the college we go to can make a life-altering difference to our social mobility. It’s a position he lays out in The Years That Matter Most: How College Makes or Breaks Us.

I’m a fan of Tough’s writing, having read How Children Succeed and Helping Children Succeed previously. Both were well-researched and provided a great deal of perspective on the factors that lead to a child succeeding. It’s a natural evolution that Paul’s writing would grow up and move from childhood to adolescence. He brings to bear the same research and integrity as his prior books. As any parent can tell you, adolescence is a harder time for children. This topic is no different. It’s a challenging problem that he does good justice to, even if I’m not convinced in the end.

Trust: Human Nature and the Reconstitution of Social Order shares a traditional Irish saying: “Shirtsleeves to shirtsleeves in three generations.” This saying contrasts the work of Alexis de Tocqueville, which Tough explains was confused by the social mobility in America. Our ability to change our class in life was a relative anomaly to the minds of the Europeans. The assumption was made that you were born into a class, and you’d say in that class. However, the ideas in America were different. The idea that you could work hard and change your station in life was both different and compelling. However, as the Irish saying suggests, changing your class in a permanent way wasn’t easy.

Social mobility is a great broad concept, but too often, it’s defined in economic terms, where the change is a relative degree of income or wealth. Somehow, making $1 million per year deposits you magically into a different class. However, as Kahneman points out in Thinking, Fast and Slow, the positive value by doubling our income doesn’t double our happiness or joy.

A more practical approach to thinking about social mobility is to consider stability and safety. In far too many families, their shelter and food are not assured. In far too many families, there are dangers of violence and turmoil that literally reshape the brains of those trapped within those family systems. In my opinion, the greatest social mobility move we can help people make is to elevate them not out of poverty in the financial sense but out of the challenges that are part and parcel with poverty. It’s not whether someone makes $20,000 per year or $200,000 per year that’s important. It’s whether they’re stable that matters to the development of the next generation.

A defining moment is supposed to tell the future of a person. It’s a moment where the person’s makeup and character are solidified and exposed in a real, tangible way to the rest of the world. In those terms, which college that someone is admitted to and chooses to attend doesn’t measure up. While it shapes the connections forged and the future income, in most cases, it doesn’t define a person. In that sense, it’s another in a long list of things that impact a person and shape their lives but don’t necessarily define them.

We integrate into our identities beliefs about who we are, whether we’re bright, funny, introverted, cute, friendly, or hundreds of other labels about aspects of who we believe we are. The point of inflection at our transition to college is not so much a crossroads about our earning potential as it is a crossroads of our identity.

Students who worked hard and were at the top of their class in high school find that they don’t get into their chosen school – or worse, they do. When they arrive at the high-performance school of their choice, they find that the competition is much, much stiffer. They once could run circles around their classmates, but now they’re struggling to keep up with the coursework. Instead of the person who was breaking the bell curve, they’re hoping that the bell curve helps them enough.

The reshuffling of identities can be hugely disorienting and challenging. The transition to college may be important from a financial perspective, but the ability to cope with identity disruption may be more critical.

All of us. Every one of us. We all want to belong. Even the misfits want to belong – in that case to a group of people who don’t belong to the mainstream. Seth Godin, in This is Marketing, quotes Professor Roland Imhoff in his writing: “Adherence to conspiracy theory might not always be the result of some perceived lack of control, but rather a deep-seated need for uniqueness.” However, even in this uniqueness, there’s a desire to have others share their belief.

One of the common thoughts that arises in everyone is the thought that we don’t belong, and we’ll be discovered as an impostor. It’s called “impostor syndrome,” and most people report experiencing it sometime in their lives. Rooted in our deep desire to belong, impostor syndrome is the fleeting or persistent feeling that we don’t really belong. I wrote about Straddling Multiple Worlds, where it’s easy to feel like an impostor, because you don’t feel like you fit into any of the places you experience on a regular basis.

If you believe that your whole life hinges on the outcome of a single test – like the SAT or the ACT – you’ll likely have test anxiety simply because there is so much at stake. Many people struggle in the presence of stress and anxiety. As a result, the very fact that it’s important makes you not perform as well. (See Drive for more on the impact of stress on creativity and Why Zebras Don’t Get Ulcers for more on stress more broadly.)

Because of the importance of the test, there is a whole industry of test preparation that surround both the SAT and ACT exams. The idea is that if you can get a better score on the standardized test, you can get admitted to a better university and therefore change the course of your life.

The truth is that the SAT was initially designed by Ivy League Colleges to assess what was thought of as a fixed capability – something that we’ve long since abandoned. (See Mindset for more.) Even though it’s been revised, the SAT remains an assessment with substantial biases that create a tendency for more affluent test takers to do better – leading to the nickname “Student Affluence Test.” The alternative, the ACT, was designed to be a more practical test, and it fares better – but it’s not without its biases either.

To combat the biases, and because the relative differentiating advantage with these standardized tests is low, some schools are no longer requiring that prospective students provide standardized test scores with their applications. While it’s unlikely we’ll see these tests go away, they’re losing their stranglehold on students who want to go to college.

Because of the biases that make it more likely for rich students to attend prestigious schools, several attempts have been made to encourage students to attend the best school they’re admitted to. The idea is that these schools offer the best potential for long-term income generation.

The money game is soft on both sides, both in terms of the long-term earning potential and the amount the student pays for tuition. The schools with the highest incoming scores spend more to educate their students than they take in with tuition. They expect they can do this, because later the students will give to the university as alumni – and because previous alumni have given so generously. For that reason, it is presumed that you get the best education with the best college you can get into based on the scores.

However, many non-affluent students choose state schools, schools closer to them, and those where more of their friends are going. The result, it is supposed, is that they’re wasting their potential. To resolve that, attempts have been made to encourage students, including packets and conversations. However, most of these have been ineffective.

So, while I believe that Tough did great research, I’m still not convinced that your decision on what college to go to matters most. It is my belief that much of the effect statisticians see in income disparity isn’t about the education but instead the connections that are made. One could argue that it doesn’t matter. Income is, after all, income. However, I disagree. It’s my belief that the value of life is measured in happiness and what we do to further humanity. I believe education is key to both.

I have no disagreement with making money nor desiring to go to a great college. I do, however, have a great disagreement with a system that causes our teenagers to commit suicide at higher and higher rates, because they are so unhappy with their lives that they can’t see any point in going on.

I didn’t go to college immediately after high school. I was accepted, but I looked at the finances and knew it wouldn’t work. (There’s a long but largely irrelevant story there.) I started working a job and went into publishing. It’s not that I make the most money of anyone I know. However, I like my life. I get time with family and friends. I get to pursue the things bring me joy (like reading and learning). We (my wife and I) are working hard to change the world that we live in for the better. For me, that’s more than any amount of money. After all, money doesn’t buy happiness.

In the end, I believe that The Years That Matter Most are the happy years, and I want more of them.