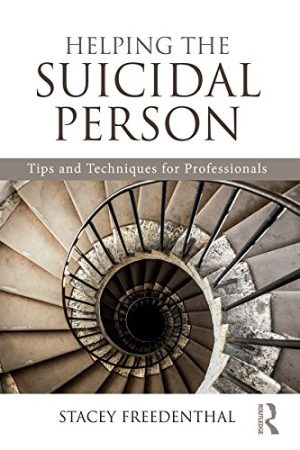 They want to help; they just don’t know what to do.  It’s a tragic fact that most psychology and sociology programs don’t have a single class regarding suicide in their entire academic career.  So therapists and social workers encounter a suicidal person and they feel – as they are – completely unprepared for what to do next.  Helping the Suicidal Person: Tips and Techniques for Professionals is a way of addressing the gap in knowledge –and coming to a better place of nurturing and support to help people move away from suicide as the only option.

Note: Throughout this post, I’ll be using “client” as shorthand so as not to distract from the readability.  I don’t intend to imply that everyone with whom you’ll encounter is a client, nor that you can’t use these techniques if you’re not a therapist.

While the tips are research-informed, they are often offered with limited support in research.  There’s a simple reason for this.  The research is hard to come by.  Sometimes, research can show a reduction in attempted suicides but not in completed ones.  In fact, to show a 15% difference in suicide rates (with an appropriate confidence interval), researchers would need to enroll 13 million people.  That’s a relatively impossible challenge.  As a result, we have to accept the research that we do have and attempt to make the best of it.

Sometimes, the problem isn’t scale.  Sometimes, the problem is the ethics of the situation.  Consider that there is no randomly-controlled trial about the use of parachutes reducing death when jumping from an airplane.  Obviously, they work.  So obviously that no one would subject someone to the control condition of death to demonstrate that people without parachutes jumping from planes die.

This is a case where even though there is no research supporting the efficacy of the approach, it doesn’t mean the approach isn’t (or can’t be) effective.  It just means that the research hasn’t been done for a myriad of reasons, including time, money, and ethics.

In some ways, it’s as if clinicians are practicing “Don’t Ask, Don’t Tell” as an approach toward suicide prevention.  Many clinicians don’t ask – and, particularly, don’t ask directly – if someone is considering suicide.  There was a historic concern that this might “plant” the idea of suicide in the client’s mind, but research has proved this to be incorrect.  Even without this defense, it’s still a hard thing for most clinicians to ask, so it’s frequently swept aside and forgotten about.

On the other side, the probability that a client will volunteer their thoughts of suicide are very low.  Despite somewhere between 1:5 to 1:6 people having thought about death by suicide, it’s unlikely that they’ll bring it up.  Instead, they’re more likely to believe that if the therapist doesn’t ask them, it’s not important – secretly knowing that it is.

Similarly, you can intentionally stay ahead of where the person is likely to be by asking the question leading to an overly extreme – but not absurd – level.  For instance, you could ask “Do you think of killing yourself 20 times a day?”  The answer may be 15 – but the person will start by telling you “not that much” and giving you an answer that’s more likely to be accurate.

One of the barriers that clinicians must overcome is the client’s fear that if they say the word “suicide” or admit to suicidal thoughts, they’ll be involuntarily committed.  Involuntary commitment is a sometimes necessary but always troubling challenge.  People who are involuntarily committed experience a loss of freedom and control that can further exacerbate their reasons for wanting to die and simultaneously can destroy and therapeutic alliance and trust that might have been created.  (See The Heart and Soul of Change for more about the importance of therapeutic alliance.)

One of the challenges is that the client’s goals and the professional’s goals may be different.  The professional wants the person to stay alive, and the client wants the pain to stop.  As a result, there can be a gap through which clients become concerned about how their therapist will react.  They’ve likely heard stories about an involuntary hold – and they don’t want to experience it themselves.

Neither Lecture nor Pep Talk

Motivational Interviewing calls it the “righting reflex.”  It’s the tendency to directly correct a person’s perspective by telling them how they’re wrong – and it’s powerful.  It was Carl Rogers who insisted that client was the expert – in their lives.  We may, from a few minutes of conversation and some notes provided by others, believe their pain is manageable and their problems are all solvable, but from their perspective, they’re not.  Until they believe you truly understand, they won’t listen to suggestions; even after they believe you understand, they’ll not listen unless you tread gently by asking careful, somewhat leading, questions.

Lectures about how someone’s behavior, feelings, or perspective isn’t right has never worked – even when you were a child.  It induces guilt, shame, and invalidation, which further pushes them away.  It also causes them to become more entrenched in their positions.  They start looking for ways to defend their position and they find them.  They ultimately have invested more in their perspective and become less likely to change it.  (See Influence for more on these effects.)

Pep talks don’t work because they’re hollow.  Letting people experience joy and happiness is a good strategy to fight depression that seeks to convince them they can’t find joy or happiness.  However, these must be experiences they want.  One useful technique that I’ve used is to intentionally set a positive event out several weeks out so that anticipation can build.  The actual amount of time that you set the event in the future is dependent upon the client, but the point is to build an idea in the future.  Do be prepared that depression will try to convince them they won’t have fun.  The response is “Didn’t you have fun in the past?”

One strategy for assessing the importance of various reasons for dying is to ask the client to list them, and then rank them in order of importance.  This has a focusing effect that allows you to focus your energies on the most important items.  Sometimes, it’s possible to carefully walk them through strategies that break down the barriers preventing them from overcoming their reasons for dying.

For instance, if they’re struggling because they can’t find a job, you can work with them on ideas to get a job.  Care must be exercised here, because you’re likely going to move quicker than the client. You’ve seen these problems and solutions before and so you know the landscape and you’re likely to rush ahead. However, helping people work through problems is directly addressing the problem-solving challenge and cognitive constriction that seems to be found with most suicidal people.  It’s worth the time.

It’s an awkward conversation to ask people why they want to be alive.  It’s awkward when suicide isn’t a consideration and can be even more awkward when it is.  Often, you’ll need to start with the reasons why people want to die before getting to their reasons for living.  It’s important to recognize that people who are struggling with thoughts of wanting to die may have trouble enumerating their reasons for living.

They Can Move On

A somewhat typical response to reasons for dying may be that so their loved ones can “move on with their lives.”  This is the quintessential comment of burdensomeness.  (See Myths About Suicide for more on burdensomeness and its relationship to suicide.)  In many cases, however, the others that the client believes will “move on with their lives” are the recipient of the pain that the client is trying to displace.  Suicide and Its Aftermath says it plainly.  Suicide transfers the pain from the person who dies to those who survive.

Certainly, there are some situations where a person’s health is such that they are, in some sense, a burden to others.  However, one of the things that all people tend to misunderstand is that burdensomeness should be measured by the person who is (perceivably) burdened.  It’s possible that the other person doesn’t perceive it as a burden and may even believe it’s an opportunity to replay the kindness and support they’ve received.  Encouraging a more realistic perspective of the degree of burden is a good idea.

One of the problems that exists in suicidology is that we believe things that aren’t true.  Thomas Joiner wrote a whole book about Myths About Suicide.  Craig Bryan in Rethinking Suicide challenges us to realize that the screening tools that we use don’t work.  Some still insist that most (or all) people who die by suicide sent warning signs.  Joiner addressed this directly and Bryan indirectly, but the myth persists.

The simple fact of the matter is that we have no way of knowing who will die by suicide or not.  We know statistics and probabilities – but not people.  There are lists of warning signs that cause concern, but it takes judgement to decide who is at the most risk of immediate harm to themselves and who isn’t.  It’s recommended that clinicians record the reasons for their assessments in their notes so, if there is any question in the future, there’s a record of why they assessed the risk the way that they did.

All that to say that while there are key indicators – like directly stating that they want to die – none of those indicators in isolation is a direct prediction of short-term risk.  It’s only by looking at all the factors in the situation that someone could assess risk.

The Tips and Techniques

The listing of tips and techniques are:

Maybe it’s time for you to learn the tips and techniques that you can use to start Helping the Suicidal Person.