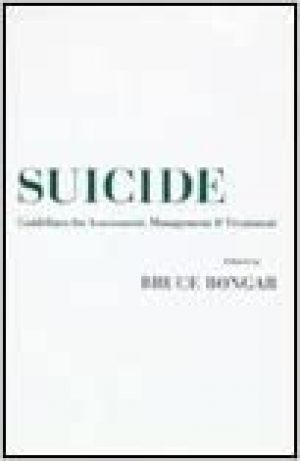 There’s a yearning on the part of those who have encountered suicide.  It’s a yearning for answers.  Answers to questions like how can I know that someone is at risk?  What do I do to minimize someone’s risk?  And how would I treat someone who is at risk for suicide?  These are the questions that Suicide: Guidelines for Assessment, Management, and Treatment seeks to address.  Like the other literature on suicide, there are no clean, simple answers.  There are only rough markers that delineate the edge of our knowledge about suicide.  This is the exploration of what we know and the awareness that it’s not enough.

In all research, there’s the challenge of teasing out the relevant factors.  Is it age that’s the real variable or the deteriorating health status that normally comes with age?  Is it alcoholism, or is it the lack of steady work, home, and relationships that are normally associated with alcoholism?  One of the other factors that is often associated with suicide is marriage.  Marriage seems to form a protective factor for both men and women.  However, the question becomes whether marriage becomes a proxy for some other variable that investigators didn’t think to ask about.

What if the true inhibitor of suicide wasn’t marriage or even a close partnering relationship?  What if the protective factor was something like having children under the age of 18?  That’s an insightful question to be asked.  While the solution may not be to encourage people to have more children any more than we encourage them to get married, it is helpful to know so that we can explore ways to amplify the protective effect.

In Being Mortal, Atul Gawande explained the research that said that showed that people who had something to take care of – as simple as a plant – were less likely to die.  It’s simple and maybe that same thing has a negative influence on suicide as well, we can only speculate.

If we want to make a huge difference in mental healthcare, we have to help healthcare providers know what to do, how to refer, and how to follow up.

The recommended approach is a 10-step sequence that gets progressively closer to a concerning situation and provides an approach for identifying high and moderate risk patients.  The steps are as follows:

These may not address everyone’s potential for suicide, but they’re substantially more detailed than most healthcare providers have ever asked their patients.

In a bit of twisted logic, most people who died by suicide were known to be depressed before their act – and in most cases, the depression was considered normal for their circumstances.  The tricky bit about this is the language of depression, which, in terms of DSM-5, has a specific set of diagnostic criteria – including a minimum time component.  The layman use of depression is as a synonym for sadness.  More challenging is that DSM-5 tries to draw the line between normal responses to tragedy and loss and the excessive reactions associated with major depressive episodes.

It’s one thing to say that you should treat every depression seriously and quite another to determine on a situation-by-situation basis whether the response is normal or represents a problem.  In the short term, there isn’t an answer; but in the moderate term (two weeks), it may be possible.

My concern is that this approach is a trap that forces professionals into feeling guilty that they didn’t detect the problem, when the truth is that there was often no way for the processional to distinguish between “normal” and “abnormal.”

Children (and adults) often misinterpret situations and assume they’ve got a causal role or a partial causal role in situations that have nothing to do with them.  Children believe that they’re somehow responsible for their parents’ divorce.  They may also believe their thoughts about wishing that someone would die actually made them die by accident or other means.

The result of these mistaken assessments is that the child (or adult) carries around hidden guilt and shame.  They can’t imagine how they could be so evil as to wish someone’s death or so able to cause a parent’s divorce but be so powerless to stop it.  Sometimes, it’s these incorrect assessments that lead people to the guilt and shame that ultimately drags them under where suicide can take them.

Judith Harris Rich in The Nurture Assumption and No Two Alike explains peer pressure and how a parent’s influence on a child is powerful but not all powerful.  Their relationships with their peers has a strong pull on their personalities and their behaviors.  What Rich doesn’t cover is the degree to which these relationships form a powerful protection against suicide.

The more cohesive and adaptable the family is has a powerful protective effect, but so, too, does the degree to which someone feels connected to their peers.

Most mental health professionals routinely screen for suicidal concerns, but few do so using existing tools and scales.  When asked why not, the answer was that they would use them if they were more reliable and valid.  It’s a simple response with profound implications.  The implications are that if we wish to get to standards of care, we need to plan to get to those standards by creating an offering that delivers on the promise of high sensitivity and specificity.  That is, the tool must identify those who may commit suicide soon and only those individuals.  It’s a tall order, but it’s what we need if we expect clinicians to cluster around a standard for assessment.

Getting the Last Word

A common refrain from those who attempt suicide but fail is often that they feel as if they’re unheard or powerless.  That is, they see suicide as a way to get in the last word in an argument or discussion.  They believe that their act cannot be misinterpreted and that the other party (or parties) won’t be able to negate, refute, or minimize their communication.

One of the cornerstones to Motivational Interviewing is the awareness that the patient is the expert on their lives.  It creates an atmosphere of validation that they feel as if they’re heard, because the interviewer approaches them from that perspective rather than from the perspective of expertise that the patient can’t hope to meet.

Sometimes, suicidal folks believe that they’ll achieve safety through dying.  It’s an odd thought process that involves some logical fallacies.  (See Mastering Logical Fallacies for more.)  The short form is that there is no more risk of dying if you’re already dead, so, in some sense, you do achieve safety through suicide.  What is often overlooked is the basic drive away from death.  (See The Worm at the Core for more.)  If that drive gets temporarily turned off, it’s possible to find logically-sounding illogical paths that lead to suicide as the answer.

Obviously, this isn’t the best answer, and it would be great to encourage rational thought rather than just rational-sounding thought, but that isn’t possible in every case.

Some level of false positives for suicide screening should be acceptable.  After all, isn’t it better to treat a few people that wouldn’t eventually suicide than miss those who would?  The logic is sound, but the scale and the resource limits aren’t.  First, with suicide being a very rare case (12-15 per 100,000), one can be very accurate by saying no one will attempt or die by suicide.  Obviously, this needlessly allows individuals to die, but it’s statistically sound.

The converse problem, then, is to identify the small percentage of the population that has the potential to become one of those with experience with suicide.  Even a small positive error results in many, many more individuals.  Even if the screen identified 1 in 100 with potential, it overestimates the risk by about 8 times and the downstream treatment systems aren’t capable of handling it.  There’s a truism that there are never enough mental health beds available.

In my experience having had friends needing a place to be from time to time, there’s rarely a bed available, and this isn’t changing.  There’s always a shortage.  So, if the assessment leads to the conclusion that there is risk, what’s the treatment possibility?

One of the unfortunate issues that we must face when considering suicide is the reflexive legal attack that sometimes follows a suicide.  Those with licenses must concern themselves with their legal obligation and how the courts might interpret their behavior.  The answer to this is to simply document the rationale behind the treatment and interventions.  Even if others don’t agree with the conclusions, they can follow the process that was used, and this is generally enough.

However, documentation has a better, more positive purpose.  Proper documentation creates the opportunity to learn.  Phil Tetlock in Superforecasting explains that the ability to measure, test, assess, and learn from predictions is essential to improving predictive capacities.  We need to better determine what we’re doing that’s working and what isn’t.  We can only do this if we’re willing to invest in writing down what we were thinking – and why.

Professionals – and laypeople – are advised to stay within their areas of expertise and to consult others when they’re beyond or at the edge of their expertise.  The only problem with this idea is that for all of us on the journey, there are very few effective guides in the world of suicide.  In a sense, we’re all beyond our area of expertise.  That should tell us that we need to be more active in how we seek out resources, so that together we might find better Guidelines for Assessment, Management, and Treatment.