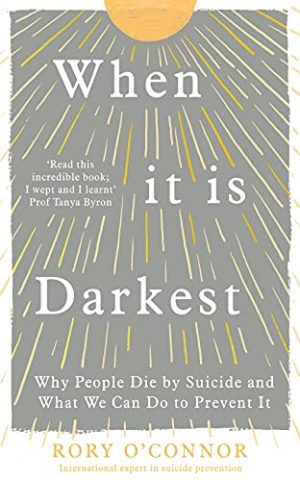 You never know how fate is going to deal a hand.  In the case of Rory O’Conner, he was going to be led towards suicide research only to find that the person who led him there would die by his own hand.  O’Conner wrote When It Is Darkest: Why People Die by Suicide and What We Can Do to Prevent It to share his research and life journey around the topic of suicide.  In it, he covers some familiar ground – and some ground unfamiliar.

A Plane Full of People

It was said that the average number of people impacted by a suicide was six.  This ignores Robin Dunbar’s work, as I discussed in my post High Orbit – Respecting Grieving.  The research of Julie Cerel in 2018 places the number of people impacted by a suicide at about 135.  With this, we’ve moved from those who are most devastated to also include those impacted by the death.  However, everyone in this list will feel the impact of the death.

One hundred thirty-five people fit on a Boeing 737 aircraft with a little room to spare – but not much.  Every suicide impacts the equivalent of a plane full of people, people who are all in some way grieving the loss of someone who they feel died needlessly.

Feeling trapped is one of the key indicators that someone may be suicidal.  Hopelessness, to express this another way, has a higher correlation to suicide than depression.  The tricky part is navigating the waters where someone feels trapped to understand whether the reason they feel trapped is real or simply perception.  Viktor Frankl in Man’s Search for Meaning explains the situations in the Nazi concentration camps.  He speaks of the atrocities that were committed and how simple things like the way that people approached their imprisonment and impending death has a remarkable impact on their outcome.

It turns out in suicide research that there is a difference between externalities and feeling trapped compared to an internal feeling of entrapment, which may or may not have external factors.  It seems that the walls that we build ourselves are more likely to trap us and lead us towards suicide.

Feeling trapped is the absence of hope.  That absence of hope leads to the conclusion that the pain will never end, and things will never get better.  (See The Psychology of Hope for more on what hope is, and The Hope Circuit for more on why it’s important.)  One of the aspects of hope that is interesting is not only our belief in our own personal agency and how we can power through what is necessary to change our results but also the impact of the relative benevolence of the world.

The more that we can believe the world will help us, the more hope we can maintain.  Our belief in a benevolent world in which we trust in others is a protective factor for suicide in a world of challenges.

Perfectionism seems to lead to suicides – particularly the socially-prescribed perfectionism where we believe that others expect more from us than we’re capable of giving.  This is, for better or worse, a perception, and that perception may or may not match reality.  We can find that our boss really is demanding – or we can find that we perceive our boss as demanding.  From a psychological view, there is no difference.

At an organizational level, we create safety, like Amy Edmondson lays out in The Fearless Organization, by accepting people as they are – including their faults.  (See How to Be an Adult in Relationships for more on accepting.)

One of the most overlooked aspects of daily life is the need for sleep.  It’s the time when our brains perform needed maintenance.  When we don’t get it, things start to fall apart.  Sleep is an undercurrent that flows through Why Zebras Don’t Get Ulcers and How We Learn and is key to The Organized Mind.  It’s the driver for PTSD – in that disrupted sleep prevents the integration and sense-making of the events.  Opening Up and Transformed by Trauma both speak to the need to make sense of our traumatic experiences, and that’s what sleep does: it allows us to make sense of our world.

The negative impacts of sleep deprivation have been used as torture and hazing rituals.  Unfortunately, when you just can’t sleep and no one is forcing it on you, it’s harder to resolve.  People often feel powerless to build better sleep if they only know that when they close their eyes, they’re failing to get rest.

In the context of this conversation, sleep disturbances seem to be correlated with higher rates of suicide.

The Power of Connection

We do know that there are things which help reduce the burdens and appear to reduce suicide rates.  Perhaps the simplest of these is to try to understand and accept another person.  Many stories exist about people who were yearning for a connection they couldn’t find, and therefore they decided to die by suicide.

As simple and powerful as connection is, it isn’t always that simple.  Learning to just listen for understanding and not try to problem-solve is a skill that must be learned and relearned repeatedly.  Even if you don’t connect with someone well, their decision to die by suicide isn’t your fault.  As I explained in The Psychology of Not Holding Children Accountable, you can’t be responsible for something you can’t control – and you don’t control others.

Not Escaping but Accepting

Ultimately, the ability to cope with the slings and arrows of life is more about finding ways to accept yourself rather than trying to escape yourself.  Certainly, there’s always room for all of us to grow, but that doesn’t mean we’re wrong, broken, or unworthy.  Finding the narrow path with being happy for where you are today while being willing to continue to grow is what Carol Dweck explained in Mindset.  The fact that you’re not perfect or the best isn’t a sentence, it’s an opportunity.  In a way, it’s a way to accept life’s unfolding.

Some of the most promising aspects of our world are our ability to find low-cost, low-effort interventions that can have a profound effect.  Simple letters mailed on a predictable interval may be systematized and not very personal, but it’s a signal to the person who is struggling that someone cares about them and will notice when they’re gone.

It seems like these letters provide just enough time for people to ponder how much people care during the brief windows when suicide seems like an option – or the only option.  The tragedy and opportunity in suicidal moments is that they tend to be quick and fleeting.  If we can only find strategies that allow them to pause for a bit, we’re likely to help them When It Is Darkest.