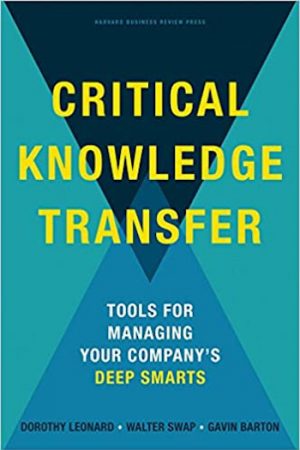 What is it that makes one person more valuable to an organization than another? Take two engineers with the same degrees from the same universities and even the same grade point average. One is invaluable to the organization, and the other is just a solid contributor. One just seems to know things the other doesn’t. When considering how to make the knowledge of the organization more accessible, it’s in the organization’s best interest to highlight the more knowledgeable of the two. However, how can you determine that?

Critical Knowledge Transfer: Tools for Managing Your Company’s Deep Smarts is designed to help solve this problem, both from the point of view of identifying which employees hold critical knowledge and from the perspective of learning techniques to transfer those deep smarts to other members of the organization.

Before you can put a plan together about how to transfer deep smarts, you must first be able to identify where those deep smarts might be. While the deep smarts themselves may not be easy to isolate and convert into explicit knowledge, there are precursors that you can look for that may indicate that deep smarts exist.

There are cognitive, behavioral, and physical indicators that, when you find them, can indicate a deeper level of thinking and processing is happening – and therefore deep smarts might be nearby. In the physical dimension, the ability to quickly, accurately, and precisely predict and respond to physical touch and other senses can lead to deeper “feels” that may be hard to articulate. From the mundane riding a bike to the subtle skill of a master illusionist, there are observable physical traits that indicate there’s more happening.

In the behavioral category are a cluster of skills that seem to be formed around communicating and relationship-building with others. We’ve all met the master connector who can make friends with anyone and who can plug people together. Whether it’s for personal gain or in service to others, master connectors can communicate and connect when others can’t. Their deep smarts involve the map of the other people they know and what they’re capable of as well as their own deep smarts about how to operate in social environments with people who have such a variety of interests, backgrounds, and goals.

The most commonly focused on category is the cognitive area, with systems thinking (see Thinking in Systems for more), critical “know-how” and “know-what” skills, wise judgement, context awareness, and pattern recognition being the contributors to this kind of deep smarts.

One of the curious entries in the list is the capacity to be comfortable with disagreement. Those with deep smarts often have a characteristic capacity for being comfortable with disagreement. The fact that other people don’t agree with them doesn’t threaten their perception or their identity. These folks have accepted that others will have different perspectives than them, and that is OK. Either they’ll learn to adjust their perception about reality – or they’ll accept that someone else has a different perspective.

We learn through well-managed conflict – through dialogue. Dialogue with another person grants us the gift of revealing our inconsistencies. (See Dialogue for more.)

When John Gottman first did research on couples, his ideas were odd. Why would you intentionally ask couples to fight? What would it reveal about who would stay married and who would divorce? The answer was in the way the couples fought. Some couples would fight and get nasty and personal. Others would fight in ways that recognized the disagreement and acknowledged the value of the person. (See The Science of Trust for more.)

Similarly, it’s generally believed that, in teams, there shouldn’t be conflict. Conflict is seen negatively about the ability of the team members to get along. However, the problem isn’t that the team is fighting. It’s an opportunity see how they’re disagreeing. If the team can be respectful of their colleagues’ perspectives and seek to better understand each other, the creative abrasion can fuel excellence and performance. Ed Catmul, in Creativity, Inc., explains that, at Pixar, the brain trust (a specific meeting) reviews and criticizes early drafts of movies. The way it’s done is constructive rather than destructive, and this allows the meetings to empower directors rather than to demotivate them.

Unfortunately, what appears to be deep smarts isn’t so deep after all. Some environments don’t give good feedback, and people aren’t interested in it anyway, since it would expose that they’re not good at their job. A bunch of monkeys could pick stocks as well as the expert investors. This sad proclamation is almost true. With dart-throwing, when humans stood in for their evolutionary cousins, the assertion was proved false. However, the expert investors only beat the Dow Jones Industrial Average 51% of the time. That’s not a particularly impressive record.

A single percentage point difference can be important when there are large amounts of money involved. However, for most people, the expertise isn’t worth much. Sometimes, “expertise” really isn’t. And, sometimes, it can lay dormant without notice.

When it comes to recognizing deep smarts after it is too late, posthumous recognition is the ultimate. Once someone is dead, they can, obviously, no longer produce additional works. History is littered with experts whose genius was recognized after their death. Edgar Allan Poe, Emily Dickerson, Henry David Thoreau, Claude Monet, and dozens of others’ expertise was never recognized while they lived.

In business and knowledge management, this highlights a key problem that plays out every day with less grisly consequences. Organizations don’t recognize the key smarts an employee had. The employee leaves, and the organization discovers what they lost. While this cannot be prevented, it does represent a challenge for organizations that don’t want to find they wasted precious opportunities to capture the knowledge that someone has.

Tactical with an Overarching Theme

I’d call it strategic and tactical. It’s the ability to be both fox and hedgehog. (See Range and Should You Be the Fox or the Hedgehog?) It’s rare to find people who have both a “vague understanding about everything” and a detailed understanding about some things. More importantly, it’s powerful. Sometimes, the most important knowledge doesn’t stand out as the most detailed expertise in a single area; sometimes, it’s hidden in the valleys between the peaks of the disciplines. It’s in the connections between one thing and another. These sorts of deep smarts are particularly hard to identify and transfer, since developing them requires developing expertise in multiple areas, which takes time.

There may be no one formula for identifying or capturing the deep smarts that folks in your organization possess. Techniques like those detailed in Lost Knowledge are all options for capturing the knowledge that has been identified. But identifying those deep smarts – particularly those smarts that will be useful to others – isn’t as easy as it looks. However, there may be a way to leverage mentoring opportunities to empower the expert with the drive to share what they know.

It starts with leaving a legacy. We all, at some level, want to leave our mark on the world. We know that some day we’ll die, no matter how much our ego tries to shield us from this fact. When we believe that we can leave a lasting change beyond our lifetime we’re motivated to try. While most of us won’t contribute to the library system like Andrew Carnegie, we can leave our mark through the way that we educate, support, and mentor others.

When you’re working at an organization to encourage experts to share what they know, consider connecting this sharing to their being able to leave a legacy at the organization and in the world.

Maybe, just maybe, this will be what it takes to accomplish Critical Knowledge Transfer.