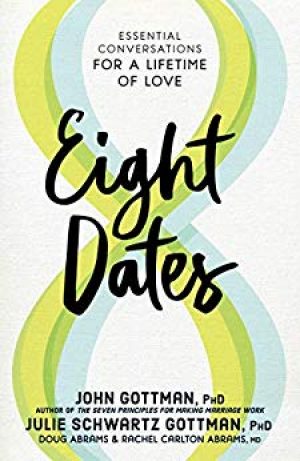 Hollywood makes it look easy, whether it’s jumping from a building to a rope ladder hanging from a helicopter or it’s building and sustaining a lifelong love – at least as much of the love as you can fit into a two-hour movie. Just because they make it look easy doesn’t mean it is. Having a high-quality and deeply intimate relationship takes work. That’s something that the Gottmans know about – not only personally but in their work as well. Eight Dates: Essential Conversations for a Lifetime of Love is a roadmap for building and maintaining a lifetime of love.

At its heart, the book shows a way to prioritize each other and hold the eight conversations every couple should have at least once – if not on a regular basis.

Identifying what keeps people together and what drives them apart is what John Gottman has been doing for decades. As I mentioned in my review of The Science of Trust, Gottman is distinguished by his capacity to predict divorce after a short few minutes of argument. His criteria for the way couples manage their conflicts are very predictive of how likely it is they’ll be able to stay together. So, when he says that vulnerability is required for a lifelong relationship, it’s worth perking up your ears.

To get to vulnerability, we’ve got to make two stops first. The first step is trust. I’ve written about trust and its relationship to vulnerability extensively. The most recent coverage is in Trust=>Vulnerability=> Intimacy, Revisited. The short version, for our context, is that trust is the belief that we can predict someone’s behavior enough that the chances of betrayal are low. When we predict that the other person will have our best interests at heart, we develop a perception of safety. This perception of safety allows us to become vulnerable. So, the stops on our way to vulnerability are trust and safety.

John Gottman calls the moments when you can make the choice to lean into your love or be selfish “sliding door” moments. In the response for a bid for affection, you have the choice to make to do what you want – or respond to the bid and pour into your relationship. Sliding door moments are the choice between what we want in the moment and the long-term health of the relationship. That isn’t to say that we should, or even could, make the decision for love every time. It’s always possible that we’re too tired, too sore, or too distracted. However, it’s the effort it takes to make these choices routinely that builds relationships up.

Whenever you’re putting effort into anything, there’s a background accounting happening. Is the effort I’m putting in worth the results I’m seeing? While we can defer seeing results, ultimately, the calculus that happens is deciding whether the results are worth the effort. (See Relationship Calculus for more.)

The Gottmans share six characteristics that seem to be found more often when successful couples are speaking of their marriage:

I know plenty of couples whose marriages work for them but in which there is very little “we” and a lot of “I” space. They enjoy their time together, but that time is small and secondary to their individual lives. While it seems to work for them, it doesn’t work well for Terri and me – and the Gottmans seem to believe it’s not the best approach.

For the record, Terri and I get to work together, both literally and figuratively. Her desk is right next to mine. We speak together. We write together. We dream together. It seems like that is important.

Expansiveness is an interesting aspect – it’s “Yes, and…” It’s amplifying each other’s perspectives rather than negating them. It’s an attempt to build the other person up rather than tear them down. Our jobs are to help the other person become the best person they can be, and that means supporting them. (See my review of Group Genius for more on improvisation and “Yes, and…”)

Finally, I can say, personally, that Terri and I feel like we’re on a mission together. We’re struggling – to have a great marriage, to raise children, to build a business, to eliminate healthcare-associated infections. Through all of it, we’re in it together.

The eight dates are:

Each date is laid out with a guide to how to be successful. Everything from where you should be and what to bring are included in the guide to give you the best chances of success. There’s no guarantee that you’ll be able to successfully navigate the sometimes difficult conversations, but at least with the guide, you’ll handle some of the big things that trip people up and create barriers.

For Love of Money

While I have great respect for Gottman and agree with most of what he shares, there’s one area where I’ll disagree about the root cause. The research says that money is one of the top five reasons couples fight. I’ll agree that it shows up this way, it feels this way, and it may even be the content of the conversation. However, I believe that couples disagree about money because of a difference in values.

It’s not that they’re in a conflict about money. They both want more income for the family, less expenses, more play time, a more stable nest egg for rainy days or retirement, and so on. They’re quite aligned on all these things. Where they’re not aligned is in their values about each of these in relation to one another. Should we save more money or have more vacations? Should we take stressful jobs with higher salaries – or live simpler lives with a less stressful job?

Those are the real questions at the heart of the fights. The husband wants to buy a new car, because he thinks he deserves it. The wife is concerned about the kid’s college fund, or the fact that they can barely meet their current commitments, or whatever. Similarly, the husband may not understand the new dress that helps the wife feel more attractive.

So, while money is the surface level-issue that’s seen, in my experience, it’s rarely the root cause.

I’ve developed conflict apathy. I don’t go looking for fights. However, I’m no longer afraid of them, either. I don’t worry that there will be hurt feelings or permanent damage. I speak my truth in love and expect that Terri will do the same. That’s not to say we don’t hurt each other – we do. However, we don’t run away from the conflicts because we’re afraid of getting hurt.

I don’t know if you can build what Terri and I have, but Eight Dates might be a good start.