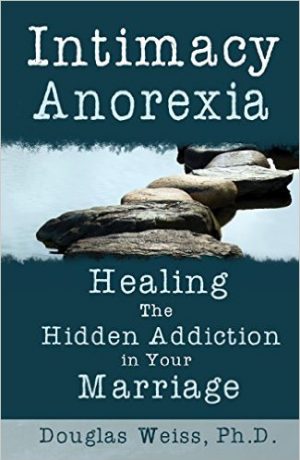 It’s been years since I read Intimacy Anorexia. It fell into my standard note taking pattern but I suppressed the process of writing the book review on it because it was too close and too personal. I wasn’t able to be objective about the content because I was too close to it. However, with the passage of time it’s become easier – and possible to share some of the insights that the book contained.

When I read it there were times it was just eerie. I heard my now ex-wife’s voice in some of the quotes in the book. I heard similarities which were difficult to ignore.

I defined Intimacy in my landmark post Trust => Vulnerability => Intimacy as “the kind of connection that two people can have when there are no barriers between them – emotionally, intellectually, and spiritually.” That’s a good one sentence description. However, more expansively, intimacy is not needing to defend yourself against the other person because you know they have your best interests at heart.

Most typically anorexia is used in reference to anorexia nervosa which is an eating disorder where people literally starve themselves. They resist food and gaining weight to a level that they may become skin and bones. Here anorexia is expressed differently. Instead of denying food the intimacy anorexic denies intimacy. To be clear a person with anorexia nervosa does eat. They eat just enough to survive.

Similarly an intimacy anorexic is intimate at times. However, the intimacy comes with guilt and fear. Anorexia isn’t the complete absence of food or intimacy, it is the unhealthy limiting of something.

Tools of the Anorexic

The intimacy anorexic is armed with a set of powerful tools that they use to prevent others (including spouses) from getting close to them. Here are a few:

Fears of the Anorexic

There are common fears that an intimacy anorexic has. Here are some of them:

The Intimacy of Sex

Evolution is a powerful force. Natural selection has created numerous systems to ensure reproduction and survival of the species. Not the least of which is the drive for sex and the rewards for sex. We’re chemically driven to desire sex both before the event through the use of pheromones and during/after the event with a chemical reward system. The reward system includes:

You can imagine with a chemical cocktail like this it’s no wonder that sex is a powerful draw for everyone. However, for the intimacy anorexic who fears being seen by another person the results of the chemical cocktail are frightening. The walls come down for a moment because of the chemical reactions involved. So whether they like it or not sex brings people close together. Perhaps too close for the intimacy anorexic. That’s why withholding sex in a marriage by an intimacy anorexic is so common. The fact that it denies the spouse their only socially acceptable sexual outlet makes it cruel.

Earlier I described anorexia as a reduction and not the complete absence of food or intimacy. This is a very confusing point because often anorexics will say that they are intimate or more often they point to the fact that they do have sex with their spouse. They hold up that they can’t be anorexic because they sometimes give into food or intimacy. However, this misses the fundamental point that it isn’t the complete absence but rather an inappropriate ratio or frequency.

Along the same lines of the question “How do you eat an elephant?” which has the predictable answer “one bite at a time” comes the question “How do you starve a dog?” The implication here is not the literal starving of the dog but rather, how do you create a mean and angry dog who will bite at the smallest provocation. The answer is to starve them. However, you have to feed them something or they’ll die and that’s not the point. The point is to create a mean and angry dog so you feed them but always just a little bit too little. You never give them enough to feel satisfied or OK.

The resulting dog will be conditioned into a mean and angry animal. The sad part is that this is the same process through which intimacy anorexics train their spouses. They teach them to be always hungry and just on the edge of exploding. Spouses sometimes choose to get fed other places – leading to inappropriate relationships or they block out that part of themselves. They learn that their need for intimacy is bad and that they should suppress it. They learn to withhold from themselves.

Perhaps the most painful lesson that the intimacy anorexic teaches is that withholding is OK. They teach that it’s the right response to withhold yourself instead of share. The sad fact is that the teaching of withholding is caught by those close to the anorexic, particularly children.

Whether you find yourself in the story as an anorexic or the spouse of an anorexic – or even if you’re just curious about how intimacy anorexia works, you should pick up the book and read it. You may just find that there’s a bit of Intimacy Anorexia in us all.