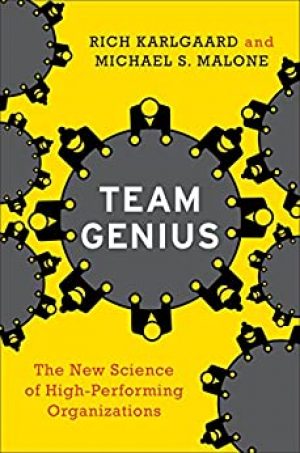 How do we get productive work out of a group of people? Team Genius: The New Science of High-Performing Organizations seeks to answer this complex question. Instead of focusing on the big picture corporate strategy like Strategic Management, which seeks to organize the big picture of the organization, Team Genius seeks to focus on the level that work gets done. Like Richard Hackman in Collaborative Intelligence, the focus is on the way that small teams get work done. But unlike Hackman, Team Genius starts with having the right number of people.

Dunbar and the Numbers

The size of the team matters. Too small, and you can’t get enough done. While Range talks about the value of a generalist capable of doing many things and filling gaps, at some level, there are times when you just need sheer numbers of people. Conversely, when the “team” is too large, it descends into a lack of trust and bureaucracy that eats all the performance. That’s where the work of Robin Dunbar comes in. Dunbar is an anthropologist who studied the size of stable social relationships in primates and came up with the correlation between neocortex size and the number of relationships.

I first spoke of Dunbar’s work in my post High Orbit – Respecting Grieving. While often simplified to a single number, his work includes different rings of orbit around us, from our closest friends (3-5) and our friends and family (12-15) to our camping group (50) and the number of social relationships (150). Even these numbers are simplifications – but they’re good enough.

David Snowden, of Cynefin fame, is quoted as describing the latest number as “the number of identities that you can maintain in your head with some degree of acquaintances that an individual can maintain. It does not necessarily imply that you trust them, but it does mean that you can know something about them and their basic capabilities. In other words, you can manage your expectations of their performance and abilities in different contexts and environments.”

Because of Dunbar’s work, we can say that evolution is tied to our ability to manage social relationships. Whether it’s the need for social relationships that drove the size of the neocortex or vice-versa doesn’t matter. What we know is that there is a relationship. We also know some of what binds us together in groups.

Our rituals – and particularly our rhythmic movement, often to music – help us bind ourselves into like groups. We believe that we’re in the same group, because we’ve moved together in unison. This is one of the many points that Robert Cialdini makes in Pre-Suasion. While our evolutionary clocks are wired for connection and techniques to make those connections, our technology is busily spinning out of control.

Shery Turkle points out in Alone Together that we’re subjecting ourselves to new patterns of electronic interaction that we’ve never had and the rate at which it’s happening has never before been seen. Robert Putnam in Bowling Alone and Our Kids describes the kinds of shifts that we’re seeing as a society in part because of these technological changes. While these changes may disrupt our patterns, our thinking, and our evolution, they do give us new and better ways of collaborating if we can find them.

It’s an odd word designed to capture the struggle of the internal entrepreneur. Entrepreneur literally means “risk bearer.” (See Originals.) The risk to an internal employee isn’t necessarily financial ruin. It may, however, be loss of job, which may feel like the same thing.

Organizations must take care in their formation of teams to combat the natural resistance to risk taking and push every team to take appropriate risks. Chris Argyris in Organizational Traps speaks about the dangers of a lack of risk-taking including both the financial performance implications as well as the implications for team dynamics.

It’s an Australian reference. Tall poppies—those people who “get above themselves” – should be cut down to size. It’s also the idea that when people get outside the norm, when they distort or disrupt the whole, they should be cut down to protect the whole. Few organizations that I’ve ever been connected with have openly stated this as an operating philosophy while silently engaging in these behaviors.

Rebels at Work is open about the need to be a rebel. Radical Candor is similarly provocative inside its pages without using the word “rebel” (anywhere in its pages). However, Radical Candor does create clarity about how to be disruptive in your thinking, to step from the norm, while building healthy relationships.

My own experience is that there’s a tension created when someone offers a dissenting perspective. That tension can’t be too great, or the person will be cut down – eventually, if not in the moment. The degree to which someone can create and sustain this tension is based largely on the degree of trust they’ve developed with their team and in the organization.

Staying in the Shadows

Some of the teams that Team Genius speaks of aren’t what we think about when we think of a team. In many cases, the team is two people that work together to be productive, and some of those relationships are very asymmetric. Consider the leader and their executive assistant. The leader is the one who receives all the credit – financially and non-financially. The executive assistant may be just as critical as a pair of glasses, but dismissed almost as easily.

The truth is that, in these relationships, one person stays in the shadows – a place they may be perfectly content with. When you look carefully at great leaders, you often find that they have at least one if not more people behind them, supporting them and making them more successful than they could be on their own.

Iron sharpens iron. Some teams are places where people can develop their own skills to contribute to the team or become better for what comes next for them. At their best, teams not only make people smarter while they’re in the team, but they leave the individuals with a residual positive outcome that stays with them.

When you speak with most folks about diversity, they see it as the first part in a diversity, equity, and inclusion department or program. However, when most biologists, sociologists, and psychologists speak of diversity, they’re not speaking about gender, race, or sexual orientation. They’re talking about who people react, respond, and process the world around them. The Difference makes the point that having a diverse group doesn’t mean representing various tangible groups based on protected classes. Instead, it’s about finding people that think different (à la Apple’s old advertising campaigns).

The truth is that the best collaborations – those that win Nobel prizes – are about interdisciplinary collaborations that bring together two or more different views of a problem and meshes them together into a finely tuned machine that explains the workings of the problem and creates opportunities for solutions. When we’re looking to form our team, the worst thing we can do is stock it with people who agree with each other on everything.

A Word on Conflict

Team Genius doesn’t dedicate any time to conflicts, but it’s such a critical aspect of team formation and operation that I felt the need to interject it into this review. First, it’s important to recognize that conflict is essential for team productivity. The problem is most people perceive conflict as a negative. The most poignant memories they have of conflicts are those that are handled poorly. However, there are plenty of examples in nature of how we need struggle (and thus conflict) to allow us to succeed. In adult learning, it’s called desirable difficulty. (See The Adult Learner and Efficiency in Learning.)

When you’re designing your team, I’d encourage you to design in a bit of appropriate conflict through differences in perspective and values.

A famous quote from Top Gun is, “I feel the need… the need for speed.” Teams need a sense of urgency – a need for speed. However, perhaps more importantly they have a need for leadership. They need to have the gentle guiding and that keeps them on track to the objective and ensures that the conflicts are appropriately managed.

The types of tasks are:

Pairs and Their Types

Trios and their Types

There are also several forms of trios that are identified as well:

Friendly But Not Friends