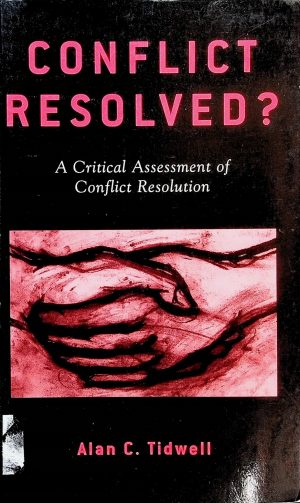 What does it take to resolve a conflict?  How does one know if the conflict has been resolved or just driven underground?  These and other questions are at the heart of Conflict Resolved?: A Critical Assessment of Conflict Resolution.  From the philosophical to the practical, Conflict Resolved? seeks to find the answers – in as much as an answer is possible.

Perhaps the first question is whether there is a conflict to be resolved or a situation that is a dilemma.  What resolution looks like varies by the people in the conversation.  Where one may consider the conflict resolved, the other may simply feel bullied or decide the fight wasn’t worth it.  It can also be that there isn’t really a way to resolve the conflict because it’s centered around a wicked problem.

Sometimes, both parties aren’t even willing to come to the table to discuss a resolution.  John Gottman in The Science of Trust describes stonewalling as the worst of the four horses of the relational apocalypse.  That being said, it’s a tactic that’s frequently used when one side of a conflict doesn’t want to make the investment to resolve the conflict.

Sometimes, it’s hard to see conflict as a positive thing.  It’s frustrating – and sometimes it borders on infuriating.  However, conflict isn’t an inherently bad thing.  It’s what you do with conflict that can be challenging.  In some cases, it can sharpen understanding and create opportunities, ideas, and solutions that wouldn’t be possible without the conflict.

For some, conflict is so scary that it must be removed from the fabric of the organization at all costs.  As a result, the benefits of conflict are removed along with the bad things.

If you’ve been through a large-scale conflict that might have landed in a court, you’re probably familiar with both arbitration and adjudication.  Arbitration is, generally speaking, voluntary and often a binding resolution to a problem.  Adjudication is going in front of a court to settle a dispute.  Courts are designed primarily to solve matters of law, so they’re not always well equipped to address the needs of the parties.

Another option for resolving a problem is mediation – and it’s often ordered as a first step in civil disputes.  Mediation is a weaker version of arbitration in that mediation isn’t binding.  If no agreement is reached, then another option is tried.

When it comes to conflicts, arbitration is often better suited to finding win-win solutions that everyone can be at least be moderately happy with.  Of course, mediation – and dispute resolution attempts between the parties – should precede even arbitration.

Conflict, we teach is caused by only a difference in perspective or a difference in values.  Values are about what’s valuable to each of the parties.  (See Who Am I? for a good understanding of 16 basic motivators – or things that can be valued.)  In the quirky world of values, it’s important to recognize that what we believe will be valuable, like food, may be less important than something else for the parties involved.  It’s important to check your sense of what the other person’s values are with questions designed to ensure that you accurately understand.

If trust is a challenge, it may not be possible to ask the questions directly and a more indirect questioning approach may be necessary.  However, understanding what the other person wants and what they value can’t be overemphasized.

One of the hidden side effects of one party getting their desired result is that this may block the second party from getting theirs.  If Palestine wants Israel to give land back, and Israel wants more Palestinian land, then the achievement of one group’s goals necessarily infringes on the second group.  These are places of interference – and conflict.

Some of these goals may not be possible to address.  However, in other cases, it may be that the goals are just a means to an end.  In such cases, sometimes the interference areas can be side-stepped by working on the ends that both desire rather than the means.

When working to resolve a conflict, it’s easier to accept the status quo and not challenge whether the future could be better if the conflict becomes resolved.  However, easier doesn’t mean better.

There are three fundamental views of how the world works.  They are:

Inherent discounts personal agency, while contingent overemphasizes it, effectively saying that you’re responsible for things that happen to you regardless of the circumstances.  Interactionist recognizes the interplay of factors and that no one thing can make the results.  (See No Two Alike for more about this idea.)

Our identities are tricky things.  Like a kaleidoscope, we see ourselves differently.  We see ourselves as aspects of a single identity.  One of the aspects that we often see is the role we’re to play in a situation.  Once we’ve established our role, we’ll work hard to protect it – even if the role was randomly assigned and trivial.  We get wrapped up in how we should behave in a role and will protect that even when it’s not appropriate.

How we respond to things is based in part on the issues at hand, but often there are subtle forces that are shaping our responses.  How different is it to hear of the stock market plummeting and the stock market having a moderate setback of 1%?  Both can refer to the same event, but the language shapes how we interpret the event – and the meaning we apply to it.

It’s not just the events or the language around them that matters but also the meaning that we apply.  If we apply meaning that we’re starting a market crash, then the news is tragic.  If we instead look at it as a minor market correction, it’s not worth worrying about.

When we’re looking at conflicts, the language that we use and the meanings we apply can add more to the story than the events themselves.

While one cannot ignore history lest they be doomed to repeat it, we must simultaneously recognize that some aspects of all history have been editorialized and adjusted to fit the perspectives of those people who were writing it.  The conquered people rarely write the histories, and therefore the conquerors are generally described more favorably than they deserve to be.

The truth is that, during conflicts, few people are focused on the rather mundane task of recording the conflict.  As a result, we often find that histories are reconstructed, and through that reconstruction, fictional parts are added, estimated, or fabricated.  Because of this, we can’t accept that what we learn about history is a true and accurate account.

The work of Albert Bandura in Moral Disengagement, Phillip Zimbardo in The Lucifer Effect, and Viktor Frankl in Man’s Search for Meaning point to the tragedy that occurs when we dehumanize others.  Building on their own and others’ work, they discovered and documented what happens when you make “others” less human, and it’s not pretty.  There’s a fundamental difference between those who are committed to seeing other humans as humans and not as other objects.

Classic game-theory work as it was established by von Neumann and Morgenstern describes the kinds of behaviors where each party is out for their own best interest only.  However, as John Gottman in The Science of Trust and Robert Axelrod in The Evolution of Cooperation show, a strategy where you’re looking out for yourself – and others – is a better approach.  John Nash is credited for finding the solution where better outcomes can be achieved by all if everyone is willing to help others when it doesn’t hurt them.  It’s consistent with the work of Francis Fukuyama in Trust: Human Nature and the Reconstitution of Social Order and how trust positively impacts families, communities, and countries.

The more we treat others as co-adventurers and less as objects to be dominated, the better we’ll be able to resolve conflicts.

While in most cases it helps to reach shared perspectives and accept, if not agree on, values, there are some cases where the very nature of the group and its power is based on the conflict itself, and changing views would necessarily mean the dismantling of the group itself.  In such cases, it’s unlikely that the group would be willing or able to move forward towards resolution.  The example that’s given is the Ku Klux Klan (KKK), whose basis is hatred for black people.  For the group to lose its hatred would cause the group to lose its foundation and unifying force and therefore dismantle it.  It’s a high bar for conflict resolution to cause a group to cease to be through the participation.

Perhaps a good first step to accepting the costs of conflict and finding ways to reduce them is to read Conflict Resolved.