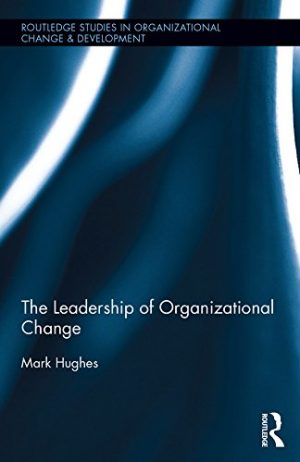 Sometimes, paths cross a few times before connections are made.  The Leadership of Organizational Change wasn’t my first interaction with Mark Hughes.  I read it because of the respect I had for a man who has spent his life trying to understand and move forward our ability to implement change.

My first encounter with Hughes was only in his writing.  He was critical of the use of a 70% failure rate for change management projects.  His argument is that there isn’t research support for this number.  I agree that there’s little direct support for this number – but the indirect evidence that this is a reasonable number is compelling.  I explained in Why the 70% Failure Rate of Change Projects is Probably Right that large scale projects of all kinds tend to fail at this rate.  So, while Hughes’ point is valid, I’m not sure that it matters.

Sometime after first discovering Hughes’ challenge to the 70% number, he was invited to join a think tank that I’m a part of.  Hughes is a student of Joseph Rost, and Rost’s work drives much of what is done at the think tank.  Enjoying the conversation, I asked for a one-on-one conversation, which was graciously accepted.  Through the conversations, I got to understand Hughes’ interest in change leadership as a term – rather than change management, as is more frequently discussed.

Rost spends about two-thirds of his book, Leadership for the Twenty-First Century, working up to a definition of leadership.  Rost himself was a student of MacGregor, whose Leadership is a tome of a work that offers the idea of transformational leadership.  Ultimately, Rost lands on “Leadership is an influence relationship among leaders and collaborators who intend real changes that reflect their mutual purposes.”

Hughes asserts that the study of leadership and change are therefore inextricably intertwined.  One cannot think of leadership without the aspect of change (or real change).  One cannot consider change without considering the leadership necessary to reach the destination.  In this intertwining, there are concepts that are difficult to disentangle.

Rost’s initial definitions included the word “follower” instead of “collaborator.”  There is a real belief that everyone is a co-leader, sometimes stepping forward and other times stepping back.  In such a conceptualization, how is it possible to define the one leader or leadership?  In fact, some of this is the point.  Rost doesn’t believe in leadership in the contemporary sense.

When we’re looking for drivers for change, we’re stuck between the need for a leader and the awareness that the leader needs followers – or they’re leading no one.  Unfortunately, there’s no single model of leadership of organizational change that is widely supported.  (See the Change Model Library for some approaches to change management.)

The Rise of Scientific Management

One of the phases of leadership that we’ve transitioned through – or at least are transitioning through – is the work of Fredrick Taylor, who believed everything could be reduced to a most-efficient way of doing things.  Despite his popularity, a review of the work that launched him reveals that it was shaky at best.  The results were simplified, and some observations were erroneous.  Despite this, we find that managers want to squeeze out every last ounce of productivity based on Taylor’s scientific management ideals.  In Antifragile, Nassim Taleb expresses concern about removing the redundancy and capacity from a system.  We’ve seen too many places where removing the “excess” from the system results in a catastrophic failure.

The Myth of Leadership

The Western world, and particularly America, has built up the rise and fall, success and failure, of organizations, industries, and nations on the backs of leadership.  We believe in singular simple reasoning that allows for only a leader who possesses the mythical qualities of leadership and are therefore capable of leading anything to success.  The Titanic could have been led to port if only there was the right leadership to keep the ship afloat after impacting the iceberg.

These simplistic views of success and failure don’t adequately capture the dynamism that we find in the world today.  We know that there’s no one single causal factor for success or failure but rather a set of conditions under which people have found success – including with the help of a participant that others would call a leader.

If you want to get past the myth of leadership and move to a more nuanced view of how organizations can succeed, a good step may be to look to The Leadership of Organizational Change.