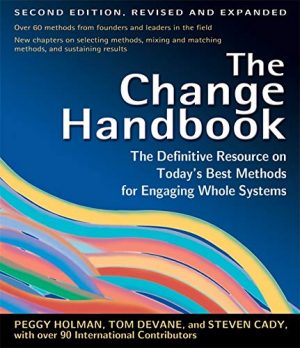 I was talking about the change models library. My friend mentioned The Change Handbook: The Definitive Resource on Today’s Best Methods for Engaging Whole Systems as an analog to what I was doing. It’s definitely true that there are similarities, but there are differences as well.

The book is built around 61 methods of creating change. Some of these methods I’ve seen fully exposed – like Appreciative Inquiry and Real Time Strategic Change. For the others, semi-structured chapters provided a brief summary that would allow me to evaluate whether the technique was an appropriate tool for the changes that I’m supporting. The structured parts gave applications and limitations and did a good job of providing a reference for comparison even if they couldn’t really be placed in a single table for comparison. (The book tries to do this.)

The largest challenge I have with the methods is that, while some appear to be well documented – like open space technologies – others seem like an approach that consulting companies have developed for their own proprietary use. That means that you’ll have to filter the list to those which are well documented or open source.

What is common about all the methods is that they’re designed to facilitate or elicit. They’re not execution models. That means that they’re all fundamentally weighted towards the front end of the process of change. There aren’t operating or reinforcing models. Though I’m sure the authors would argue that the improving methods are targeted towards improvement of the process, that doesn’t create an operating model.

To be clear, it’s not that selecting a method from the methods covered won’t help after you’ve kicked off the project. They will help you refine and align. They just fall short of an operating model.

The best way to describe the impression that The Change Handbook leaves me with is that of a primordial soup. The building blocks are all there. They just need to connect and organize. The methods all have value individually and when used together; however, it feels sort as if the organizing order hasn’t been discovered yet.

When, in 1869, Russian chemistry professor Dmitri Mendeleev published his periodic table, the chemistry world finally had the basic framework for what would become the periodic table of the elements. There was an order to the disorder that we found with the elements. (Mendeleev built on the work of several others, and other variants were published at the same time as Mendeleev’s that were substantially similar, so it’s not like one person created the table in a vacuum.)