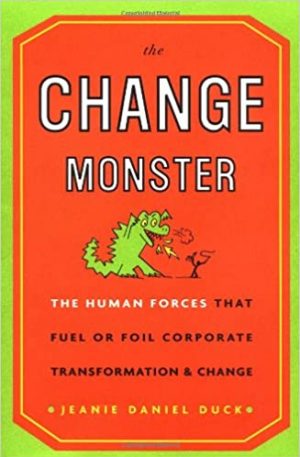 Change is often seen as a monster. It’s seen as something that is there to attack the status quo and disrupt everyone’s life. Jeanie Daniel Duck explains how this monster can be tamed in The Change Monster: The Human Forces That Fuel or Foil Corporate Transformation and Change. The change monster, she explains, follows a predictable path called the change curve, and by mastering the change curve, you can tame the monster.

The change curve has five phases:

These are the phases, but it takes strong leadership to guide the change monster through the phases successfully.

Leadership is a hard thing to define, as Joseph Rost proves in Leadership for the Twenty-First Century. Whether or not you share Rost’s perspective on the need to deemphasize leaders and speak more about the relationship, you’re likely to know what it looks like when the leadership isn’t aligned towards a common goal.

The result for middle managers and employees is disorienting. What starts at the top as a small gap in vision or approach becomes a wide gap by the time it reaches middle management and the employees. While leadership may believe that people aren’t following their beautiful strategy, it may be that the differences in understanding, the impracticality of the strategy, or the leadership conflict is freezing everyone into old patterns. In short, it may not be as much as the “they” aren’t doing it as much as “we” aren’t explaining things consistently and realistically enough for anyone to follow.

In most organizations, the problem isn’t strategy as much as it is an inability to translate that strategy into the thinking and behavioral changes that every employee needs to make to make the strategy successful. Too often, executives (I hesitate to call them leadership) develop the strategy during some three-day retreat in an exotic or at least peaceful location. They come back and hand off the strategy believing their work is done.

It’s more accurate to say that they’re ready to start the work – the hard work. It’s the work of translating the goals in the strategy into the set of actions, behaviors, and metrics that are needed to cause the vision contained in the strategy to come to life. These steps aren’t done, and as a result, it becomes impossible for employees to understand how things must change behaviorally and how their thinking must change.

Every implementation of change has problems. It’s not possible to completely avoid problems. It is possible to plan for them, and it is possible to address them once they occur. It’s wrong to believe that problems won’t happen or that they can be ignored. It’s the response to the problems that allows leadership to show their strength.

In the most ideal form, the responses to change and the inevitable problems that will arise create a willingness and wanting for everyone to display the same commitment to change and to resolving problems. Good leadership does more than solve the immediate problems. Instead, they teach everyone how to manage change and solve problems going forward.

For Love and Behavior

The goal with any change project is for everyone to love it. The goal is to tell such a compelling story about the need for change that everyone loves the solutions the leadership has proposed. However, even when this is not possible, it’s necessary to hold everyone accountable to ensure their behavior is in alignment with the proposed change. It’s too easy to end up on one side of the spectrum, requiring love from everyone, or the other, ordering compliance.

Finding the middle way that encourages love but requires compliance is difficult but necessary inside organizations.

Duck focuses on three key aspects of change readiness: Ready, Willing, and Able. Ready is about recognizing the need for change. Willingness is about being willing to do the work necessary to accomplish the change. Ability is about having the knowledge and skills necessary to be successful. Ready and willing roughly equate to ADKAR’s desire, while able roughly equates to ability.

All three are required in varying degrees for a successful change effort. If an organization doesn’t show signs of readiness, willingness, or ability, then these will need to be developed prior to the change starting or during the change process to be successful.

Communications and What Happens When You Don’t

Most change approaches are preoccupied with communications for good reason. When people aren’t given a real, concrete answer, they’ll make up their own fantasy about what is or will be happening, and their fantasy will be more powerful than any reality you may be able to communicate. If you don’t believe this to be truth, consider the now retracted story about the connection between autism and immunization. The lead author on the study that The Lancet retracted has lost his license to practice medicine. Despite this, there’s a very vocal contingent of parents who don’t believe in immunizing their children because of a single, retracted article. It was first and plausible, so it became the story that was anchored in people’s minds – even after substantial proof that it’s wrong.

That’s why it’s necessary to not only communicate the message consistently via mass media in the organization but also to get managers and their teams face to face to discuss what the message means to them. Without this, it’s not that you can just see how interpretations could go off the rails – you should expect it.

If you want to make people perk up their ears and take notice to what you’re doing, don’t move the folks who are on the fence to your side, move your staunchest opponent to your corner. The conversion to your cause sends a strong message that even one of the most opposed saw the logic of your change. The power of a single rebel converted to your way of thinking is worth their weight in gold. Those who followed them in their opposition are likely to follow them across the line and can swing the tide of the change.

You won’t convert every rebel, nor should you focus all your energy in this direction, but, done correctly, this is a powerful tool to accelerate the adoption of your change.

There is No Shortcut to Greatness

During changes, it’s often necessary to make cuts. It’s necessary to free up resources to provide those resources for the change effort. However, no change that is focused exclusively on cuts can be successful at accomplishing greatness. To accomplish greatness, it takes the kind of innovative leadership and strength that is generative, not reductive.