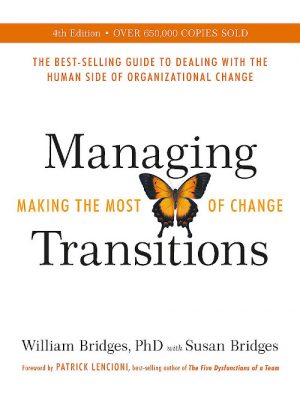 Somehow, the idea that we’re making a transition seems larger than making a change and simultaneously more concerning and more comforting. Managing Transitions: Making the Most of Change intentionally couples the word “transitions” to change to remind us of the personal nature of the kinds of change most of us consider. In that reminder is the reality that, to accomplish organizational change, we must change individually, and that means letting go of some of the things that have given us comfort.

The basic structure of the Managing Transitions model is the need to let go, the neutral zone, and the new beginning. On the surface, the model doesn’t appear that interesting. However, when you apply lessons from On Death and Dying to the letting go part, the dynamics soon emerge. We far underestimate our connection with our current environment and the way it works. Instead of leaving the past in the past, When explains that we bring it with us into the present, like the unceasing number of possessions in our houses. As strange as it may seem nostalgia used to be considered a kind of psychopathy but that is no longer true.

Because we tend to blur our memories, we tend to remember the past with greater reverence and regard than it had at the time. We have become attached to the old ways – in ways that make us reluctant to change them even when it’s appropriate to make the change.

If escaping our past way of doing things by letting go isn’t enough, we don’t instantly reach the promised land of new ideas and visions, either. Instead, we must walk through the virtual desert before reaching our goals. In the neutral zone, we’re confronted by the fact that we don’t know really how to reach the new vision, and we don’t know how to behave.

The devil, they say, is in the details. While grand visions may explain how the organization will be substantially better off once we’ve arrived at the desired change, it says nothing about the day to day operation of many of the organization’s workers. They’re left on their own to find ways and approaches that are consistent with their beliefs, respectful of their past, and compatible with the future.

The neutral zone is defined by its uncertainty, indecision, and failure to understand. None of this feels good. That is why effective change walks briskly through the neutral zone and seeks to generate clarity about the changes that are the new beginning.

Once attempted and stabilized, the new beginning must be converted to habit. Once the dust has settled and the new behaviors are known, the organization must find ways to prevent small frustrations and barriers from causing people to revert to their old ways. Too often, seemingly insignificant hassles drive people back to using old, ineffective behaviors. (See Demand for more on hassle maps and the disproportionate impact small hassles has on all of us.)

Change is ultimately about changing the behaviors of the individuals and therefore the organization, but those change in behavior don’t come because of an objective change in environment. Those changes come from the subjective way that we (and every individual) perceive the situation. To change the behaviors for good, we must change the perception.

Our intrinsic motivation is powerful. It drives us in ways that we all-to-often fail to recognize. It is also, however, fickle and frail. As Why We Do What We Do points out, our intrinsic motivations towards something can be easily crushed by external motivation. As change agents, we must subtly shift the perception such that we view the world differently and that we feel as if we’re moving forward in our choices and in our world.

Behaviors that Need to Stop

There are many aspects of any change but perhaps the most challenging are the behaviors that need to stop. In any transition, some old behaviors will no longer be necessary. Invariably these behaviors that stop are one of the first changes in the transition – and invariably they are difficult. They require that individuals be allowed to “grieve” the loss of their familiar routine.

One might believe that it would be easy to get people to stop doing behaviors. After all, if they stop the behaviors, they’ll have more time and less work. At some point considerable effort was put into establishing the habit. It should be easy to release someone from the habit when it’s no longer needed, however, habits are quite persistent. (See The Power of Habit for more on habit forming and resilience.)

It’s easy to say that not doing some behavior doesn’t have a loss associated with it. It can seem, from the outside, to be a non-essential behavior, but all loss is subjective. Someone can lose their dog and be unphased, while another person is traumatized. Same circumstances but different subjective experiences. We often underestimate or fail to recognize the losses that are associated with a change.

Consider a change that reconfigures a store and causes the elimination of a mechanical horse ride. The employees may no longer need to empty pennies from the coinbox on the horse, but the horse ride may be a part of the history of the store, and its removal may represent a loss of connection to the past. To some, the store is a job. To others, it’s woven through their history, as they remember how their father or grandfather held them safely on that “noble steed” before they were able to walk on their own. It’s not possible from a distance to determine how intensely a loss will be felt.

There’s a reason that we tend to gloss right over loss and move on to the idea of the new vision. Loss is uncomfortable. Even if it’s not our loss. Even if we aren’t directly connected to it. Mirror neurons in our brain light up (or at least should light up) when we see someone else suffering, and therefore we feel some pain. (See How Dogs Love Us and The Tell-Tale Brain for more about mirror neurons.)

Rather than addressing the pain – or accepting it – we push to move on to get past the pain. While there’s no reason to wallow in pain, there is a reason to stand in it until it’s time to move on.

It’s been years since I’ve been on a schoolyard playground. However, I still remember the feeling of the monkey bars. The longer you hung, the harder it was to hold on. I remember the secret was in the swing. You had to keep the swinging back and forth going to allow you to reach out and grab the next bar. If you stopped, it was hard – if not impossible – to gain forward momentum again.

In change, we have the same thing, where we need to keep the forward momentum going. Once we’ve lost the safety of the side ladder of our past certainty, we must keep swinging from one bar to the next on our way to the other side, where we can once again stand on a solid foundation while reaching upward. Our time in the neutral zone is this: the swinging, without a solid footing to stand on. If we lose momentum or fail to keep swinging, we may find that we fall to Earth without ever reaching the other side.

We grasp the abstract through the means of the concrete. That is, we understand patterns by associating things together and noticing their similarities and differences. (See The Art of Explanation for more.) The way we associate our current situation with a positive or a negative event can have a substantial impact on the way we feel about the event. The difference between a sinking ship and a last voyage is vast.

The difference between a parade lap and a final lap is zero feet, but they’re miles apart in motivation. The more we can associate our change with positive metaphors, the more likely we are to garner the support of everyone in the organization, and the less that it will feel like a death march. (Death March is the name of a book by Edward Yourdon, which was originally published in 1997 – before this blog was started – and refers to projects that are doomed to fail.)

Change is a Gamble

The word entrepreneur literally means “risk bearer.” While it’s typically reserved for the brave, who try to start organizations from scratch, organizations with brave leaders who are willing to try to cross the chasm from today to tomorrow through radical change are certainly bearing risk. Every change is a risky proposition in which certainty is never guaranteed.

Not all the possible changes we could undertake in a change effort make sense. Sometimes, the proposals generated will even create larger problems. So, one of the key things any change manager needs to consider is how they might sort activities into categories. Bridges suggests the following:

Another common oversight in the change process is failing to assign people to their new roles and define what those new roles should be doing. Certainly, there’s the origami that happens with the organizational chart and the resulting bird or animal with all the boxes in new positions, however, new positions and even titles don’t help anyone really understand the role that they need to play in the new organization.

Providing clarity that there is a role – or not – for people allows them to move on and grieve the changes. Providing clarity about what they will and won’t be doing if they’re still here allows them to grieve the loss of their familiar routines. Without the clarity about who is going to remain and what they’ll be doing, you may find that everyone is standing around waiting in fear – and that won’t keep the momentum that is needed.

During the rough spots in our lives, those who assign meaning to their suffering are most likely to reach the other side healthy and happy. Victor Frankl’s famous book, Man’s Search for Meaning, relates his experience in Nazi concentration camps, and how those who found solace in their service to their fellow man were those who survived. We don’t have to be a prisoner in a concentration camp to appreciate the fact that every one of us is looking for meaning.

Those changes that are successful create a shared narrative of meaning that the employees have together – a transformation that bonds rather than separates.

Everyone has past hurts. Some of those hurts were caused by previous changes – and some of them caused previous changes. While it’s frustrating to feel as if you’re paying for previous hurts that the employees are experiencing as a result of previous failures, it is necessary to accept that these hurts are real. If they’re bringing it up still (or again), they’ve not fully healed from those hurts.

Sometimes the hardest work of change management is to help people heal from their previous hurts and accept the scars, so they can make the decision to walk forward with the trust that things can be better this time. The best of Managing Transitions is in how we can remember the people during the change and support their continued healing and growth.