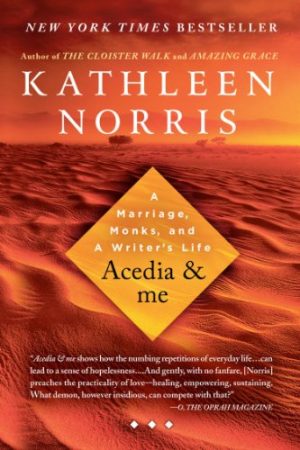 Depression is a deeply personal thing. Each person confronts the demon differently. Acedia & Me: A Marriage, Monks, and a Writer’s Life is the story of one woman’s journey through suicide, depression, and, particularly, acedia. I got drawn into the story by the distinction between acedia and depression.

I wanted to understand if what we were seeing in our world today was not depression but was instead something called “acedia.” Along the twisting road that Acedia & Me follows, I had to solidify my understanding of depression.

Depressive disorders get their own section inside of the DSM-5. The DSM-5 is the Diagnostic and Statistical Manual of Mental Disorders, which is published by the American Psychiatric Association. In the previous edition, depressive disorders were lumped in with bipolar disorders; but the prevalence and importance warranted additional space, attention, and focus. DSM-5 considers depression a cluster of disorders but says, “The common feature of all of these disorders is the presence of sad, empty, or irritable mood, accompanied by somatic and cognitive changes that significantly affect the individual’s capacity to function” (p. 155). A key distinguishing factor for depression isn’t found in the mainline text but is instead buried in a footnote on page 161 – “In distinguishing grief from a major depressive episode (MDE), it is useful to consider that in grief the predominant affect is feelings of emptiness and loss, while in an MDE it is a persistent depressed mood and the inability to anticipate happiness or pleasure.” Depression is the presence of a depressed mood, but, more critically, it’s an inability to feel pleasure.

Here though we see the problem with the diagnosis of depression and the associated definitions. It’s too broad. It includes too much. Someone who feels the need to get out and contribute to the world but simultaneously feels like the weight of doing so is too heavy fits the criteria. So, too, does someone who is sad. The guidelines in DSM-5 calls the duration of the mood two weeks or longer to qualify as depression – with a few exceptions – so there is established a time component to distinguish it from grief, but the qualifications are still needed to be clear.

Why Zebras Don’t Get Ulcers has something important to say about the relation of depression to suicide: “The psychomotor retardation accounts for one of the important clinical features of depressions, which is that severely, profoundly depressed people rarely attempt suicide.” Despite this direct inverse correlation, depression is often associated with suicide.

Making things even more complicated is that Why Zebras Don’t Get Ulcers predicts depression will be the largest medical reason for disability by the year 2020. William Glassier directly warns against the ills of believing in the change of brain chemistry, including the use of selective serotonin reuptake inhibitors (SSRIs) in Warning: Psychiatry May Be Hazardous to Your Health. With SSRI effectiveness in the range of 50-60% and placebo effects in the 47-50% range, it’s easy to see why there may not be much effect. This is a part of broader thoughts that some folks need to realize that they can choose something other than their depression as expressed in Choice Theory. This aligns well with Carol Dweck’s work in Mindset, where she explains that a growth (or malleable) mindset is more valuable than a fixed one.

For my own perspective, I accept that there are some people with neurochemical deficiencies in the brain that impact their ability to avoid depression. In those cases, drugs like SSRIs can be helpful. However, the research seems to say that cognitive behavior therapy (CBT) should be used. Only if that’s ineffective should SSRIs be added – and only for as long as necessary to allow the CBT to be effective. (See Redirect for more about CBT.) The long-term consequences of SSRIs (and other psychotropic drugs) are still being discovered. Recently a friend was published with a link between dementia and SSRI use.

Whatever you or I might believe about depression, acedia is something different. It’s something that gets swooped up into the broad definition of depression, yet it has a different mark on the person who is afflicted.

How is Acedia Different from Depression?

The definitions for acedia vary but often contain the words “apathy,” “boredom,” and “torpor.” At its Greek root, it means “absence of care.” Acedia & Me spends much of the book trying to precisely define what it is. The problem with the definition is that much of what acedia is has been swallowed up into the idea of depression. Depression has picked up more than sadness or lack of joy but also is diagnosed with “fatigue or loss of energy nearly every day.” The criteria for depression may inadvertently be picking up folks afflicted by something different – acedia.

Acedia misses the other symptoms of depression, unless you take a path through burnout.

In the review of Burnout: The Cost of Caring, I discussed how the classic definitions of burnout include being overwhelmed, cynical, or having a reduced personal efficacy. The outcomes of burnout are quite often depression. A cynical attitude sounds depressing to me. The road to depression from acedia may only have one stop – and that stop is burnout.

However, when defined in the context of a perceived lack of personal efficacy and therefore a lack of ability to control outcomes, we may find that acedia is caused by burnout. After all, if you’re feeling like there’s nothing you can do to control your life or your outcomes, what’s the point in caring about them?

The causality of the arrow isn’t clear. Does burnout cause acedia, or does acedia cause burnout – or neither? What is clear is that there is a relationship between burnout, acedia, and depression. So, while acedia may be something separate, because it is so often followed closely by depression, it makes sense that it might get misdiagnosed that way.

Misdiagnosis aside, how do you avoid the trio of conditions: burnout, acedia, and depression? How do you hold onto that idea that you are effective at moving towards your goals – particularly when you don’t know what your goals are?

In reading Acedia & Me, I was struck by the twists and turns that Norris’ life followed and the quest to find what mattered most to her. Writing was a part of who she was and what she wanted to do, but the stories conveyed that this was just one part of her world, that there remained an inner turmoil which couldn’t quite be tamed. In explaining her fears of having children and her time running the family farm, she exposed the lack of articulated goals. It wasn’t that she wouldn’t have a great impact on the world – she has. It wasn’t that she wasn’t learning deeply her faith, something that so few people even try. Instead, there was this yearning for something that was missing or wasn’t quite set right.

Most people wander through life never really pondering the mark they want to make. For some, there are unconscious answers, like having kids and raising them to be “fine upstanding citizens.” They want to teach children to help them be better prepared to contribute to the world. For others, their careers are important. The scientists want to make the next big discovery that will change the course of humankind – even if only slightly.

Few have had the patience and persistence to really understand what they want to leave the world with. Simon Sinek suggests that we Start with Why as we seek to motivate others – and that’s good advice we should accept for ourselves. However, it was the earliest monks who first described acedia. Didn’t they have their big why – to devote their lives to God?

In a sense, yes. They knew whom they were serving, but I suspect they may have had trouble articulating how they were going to make their unique contribution. What good can an individual monk in a monastery make? It turns out quite a lot, if you read the writings of some of the more famous monks. However, it’s hard to articulate a specific goal. It’s easier to answer with the platitude to know more about God or to be more Christ-like.

Perhaps they had their “why”, but they didn’t have Clayton Christensen’s insight to ask, “How Will You Measure Your Life?” The question is subtly different, but that subtlety matters. If you ask how you’ll measure your life, you’re asking a question that helps you know if you’re making progress. The monotony of the life of a monk is legendary. If you have nothing to measure your progress with, how will you keep from not caring and simply going through the motions – or not even doing that?

In the end, Acedia & Me seems to draw no firm conclusions. There’s no redemptive end to acedia for Norris (that she shares in the book, at least). There is, however, a chronicle of how she experienced it, lived through it, and learned to persevere. Perhaps that’s all we can ask for. I’d prefer to think that there’s a resilience from burnout and acedia in shaping our perceptions about what we want to do in the world – and how we think we’re doing. (See Hardwiring Happiness for changing our perspective.) Generation X – of which I am a member – was supposed to have lost their faith (see America’s Generations). I, however, continue to hold on to the belief that the world is getting better, and I’m doing my part to change it for the better. I hope to say that I never have to walk such that I feel it’s just Acedia & Me.