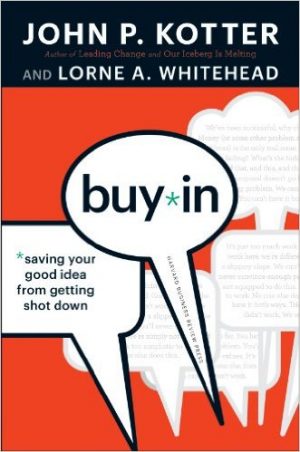 John Kotter’s work on organizational change has been substantial and in reading Leading Change and The Heart of Change I became a fan of his work. Compared to those other works, the book Buy-In is a radical departure in approach. The first half of the book is a story (like Patrick Lencioni’s The Five Dysfunctions of a Team). The second half of the book are 24 objections that can be raised against your idea – and what to do about it.

Meet the Cast of Characters

In the story portion of the book, Kotter introduces us to a cast of characters that we’ve all seen in our travels (my translation provided parenthetically):

The cast of characters makes it easy to identify what’s going on in the story where in real life it’s often hard to predict what role a person will chose to play for a given situation. Learning to read the situation and know the people so you can predict what’s going to happen is a part of being effective at keeping your ideas from being shot down.

Lessons Learned from Comedy and Presenting

As I was reading the story component of the book I was making notes about how the responses matched what I have learned from either comedy or presenting. As I’ve mentioned in my blog post “I am comedian,” I took a set of courses on standup and improvisation comedy to learn to become a better presenter. The upshot is that some of what I’ve learned about crowd work from that – and from just being a presenter – stood out as I was reading the story. Here are some of the ideas that were indirectly exposed through the story.

Getting the Audience on Your Side

Dealing with objections in a public setting isn’t that much different from being heckled on stage as a comedian or from having someone try to disrupt your presentation. In both cases, the audience has a choice to make. They’re going to need to either side with the disrupter – or they need to side with you. The good news in this is that there’s a power imbalance that works in your favor. As long as you’re respectful, the audience will usually side with the comedian or presenter. That’s what they want to do, because it assures them of their sense of power that the person in the front of the room should be the one that’s right.

The quickest and most sure-fire way to solidify the audience on your side is to defend them. If you’re a comedian, you can say that they’re disrupting the experience for the rest of the audience. In a presentation, you can simply say that you want to respect the other people’s time and that you’re happy to deal with the objections later.

Get the Audience Agreeing

Sometimes the decision on whether the audience will side with you or the disrupter is too close to call, so it’s time to pull out an old sales trick. That is to get the audience saying yes – either in their heads or audibly. When an audience is saying yes, they’re agreeing with you. After they’re agreeing with you for a while, their detailed processing (what Thinking, Fast and Slow would call System 2) stops evaluating things and settles back into the default processing – which is that you’re the expert because you’re in the front of the room.

However, sometimes even this isn’t enough. Sometimes you have to substantively change the frame of the discussion.

Each of us has things that we value. (Who Am I? discusses 16 values that we all have in varying degrees.) Sometimes it’s necessary to remind people what their values are. If you’re arguing for a new process or tool that will make more work for the nurses, it would be understandable that the nurses would resist the additional burden. However, when you reframe the problem to what is best for the patient and appeal to the nurses’ value that helping the patient get well is the most important thing, you can sometimes melt away resistance.

While we’re all concerned about our own lives and our own selfish interests – we also like to believe that we’re selfless, compassionate people as well. Appealing to the higher values or purpose can often help folks step outside of themselves.

Put them in Your Shoes

While they’re stepping outside of themselves, they might as well step into your shoes for a moment. Sometimes arguments may not intentionally become personal attacks but they can feel that way. In some cases it’s our own personal thinking that is to blame, and a normal person wouldn’t perceive the argument as an attack – but not always. If the argument could be reasonably perceived as an attack, it’s sometimes effective to reflect the argument back. “How would you feel if I said that about you?” When combined with the idea of values, you can even suggest that an honorable person supports or has reviewed the proposal and surely they’re not imputing that honorable person’s character.

Find the Principle Behind the Practice

Sometimes the actual topic of discussion isn’t the real principle in play. Often there’s an argument that by changing, we’ll be betraying the core values that the organization believes in. However, if the core value that is stated is providing books for community use, the value may be too narrowly defined. At one level, it’s true that libraries were designed to provide access to books to the public. However, at another level, the purpose of the library is to allow those who want to enrich their lives through reading to be able to do so. The shift is that the definition no longer includes books.

This shift broadened the value and more closely reaches the core principle. The principle is that knowledge is power and we want to allow everyone who is interested to reach their potential through knowledge. The delivery of books is just one way that this is done. With this larger framing of the core principle, it makes sense to offer computer access inside of the context of a library. After all, there’s more reading available on the Internet than a traditional library.

However, sometimes when broadening the conversation, reframing, and reaching down to find the principle, people can get the wrong perception.

Communications is fraught with problems. We don’t understand what words mean – or even when we do our definitions don’t match the definitions of others. Misperceptions are a natural and expected part of communications. One good way to disarm someone is to own the misperception. Apologize for the misperception and clarify what you did – and didn’t – mean. This frequently disarms the person who is being disruptive and helps them to realize that there was no intent to malign them or the group that they’re interested in protecting.

It is Not Personal

No matter how much the idea has been shot at. No matter how much the argument seems to be wearing on. You have to remember that a disagreement about a topic isn’t a personal attack on you – or the people raising the issues. It’s simply a disagreement. The more that you can remind folks that it’s not about personalities, it’s about the topic – or the values underlying the topic – the better off things will go.

Kotter offers up five guidelines for responding when your idea is being challenged.

With the background of knowing how to respond, here are the 24 archetypes for objections that you’ll get to an idea.

Rather than reproduce the responses to each of these objections, I’ll point you to the web site for the book at www.kotterinternational.com/buyin which has the summaries.

Wrapping the Argument Up

Buy-In is a different approach than Kotter’s other books – however, it’s an effective one. It’s great focus on one of the topics that few of us get a chance to focus on. Learning how to respectfully deal with disagreements and folks who are trying to prevent your idea from moving forward is helpful to all of us, whether you’re a student, an academic, a manager, or a consultant.