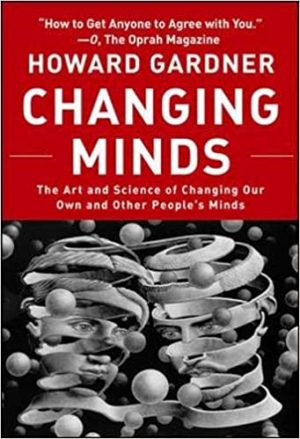 How do you persuade someone else to change their mind? How do you get someone else to come around to your point of view? These are questions at the core of Changing Minds: The Art and Science of Changing Our Own and Other People’s Minds. Howard Gardner is no stranger to the mind, having proposed the idea of multiple intelligences – escaping the bounds of the famed intelligence quotient and moving towards a more wholistic view of the kinds of skills that people can possess that aren’t reflected in such a narrow measure.

Humans aren’t good at self-monitoring their own thoughts. Over and over again, we find that self-reports are subject to extreme biases based on what we believe the person asking the question wants to hear. If you think that you’re being asked your income for a social club, you’ll overstate it. If you’re answering a tax collector, the number will be dramatically lower. If we’re so bad at simple things like how much money we make, we can’t be expected to report the experience of our inner lives in a completely faithful way. Daniel Kahneman explains in Thinking, Fast and Slow that our automatic, System 1 brain can lie to our rational brain, and we won’t even know it.

While many disciplines call for self-reflection, most are cautious to prevent you from getting too wrapped up in our inner thoughts, which can – and often do – lie to us.

An effective approach to changing someone’s mind is to come at them from multiple fronts. Instead of trying one story or approach, you bombard them with multiple stories to be processed and angles from which to view the desired change. The more approaches that you can try, the more likely it is that one of them will be useful.

Gardner explains that no matter how quickly the change may seem to occur, it almost always occurs over a much longer time. The willingness to change happens below our conscious awareness as we take in additional information. We become aware of our own change – and the change in others – in a thunderbolt. However, a better analogy may be the straw that broke the camel’s back rather than thinking any single intervention or conversation changed someone’s mind.

It’s nice to believe there’s a single watershed event that is solely the cause of a change, but the truth is often much more nuanced.

Fundamentally, humans are prediction machines. As a result, we need to make sense of our environment so that we can simulate situations mentally and ultimately come up with our predicted outcomes. Sense-making is neither optional nor accidental. Jonathan Haidt explains in The Righteous Mind that it’s our ability to communicate and predict the other person’s behavior that made it possible for man to thrive. The problem is that the way we make sense of our situation isn’t always right.

Consider the old wives’ tale about going out with your hair wet and catching a cold. It’s simple, observational, and wrong. We know now that colds are the result of a virus, but no amount of explaining or evidence can shake the hold that this simple observation has on us. Our ability to see correlations is a powerful gift but one that sometimes gets things wrong.

Being wrong is okay. The challenge is that, once we’ve made sense of something and formed a theory about its operation, it’s notoriously hard to change. Andrew Wakefield published a study indicating a correlation between the MMR vaccine and autism. He was later found to have a conflict of interest, the article was retracted, and he lost his medical license. However, these facts don’t interfere with the beliefs that some people have about the ill effects of vaccines. (They have an exceptionally low side effect rate.)

Our ability to prevent conflicting ideas of information once we’ve made up our mind is very impressive. We can ignore the facts that are right in front of our face.

Learning and teaching isn’t easy. Efficiency in Learning is just one title that summarizes what we know about good and bad teaching styles. One good strategy to use is to match the degree of support surrounding the training to the degree of need of those being trained. There’s a place between too easy and too hard where we find a desirable level of difficulty that prompts people to learn and remember, rather than listen and forget.

Creating the right kind of scaffolding for a new change is a difficult challenge indeed. It’s necessary to create a degree of ease to engage students – and enough challenge that the person feels it’s appropriate to learn. When you hit this, magical learning that sticks with the student happens – but only if you ‘re able to get this right.

The media is filled with stories of people who live one life publicly and a different life privately, senators and congressmen who send pictures of their private parts to those other than their spouse and religious leaders who have fallen from grace. These people have fundamentally separated the stories they tell about themselves and the kinds of change they want to create from the lives they’re leading.

Someday, the disconnect catches up with them, and they lose credibility. When this happens, they may not lose their position, but people certainly lose respect for them and the stories they tell because they can no longer believe that their exalted leader can do no wrong.

If we want people to make a change, we need a compelling story about why we need them to make the change, and we need to live a life congruent with that change.

All things being equal, an easier approach will win over a complicated approach. Everett Rogers explained that complexity creates barriers to adoption in his book, Diffusion of Innovations. The more complex the innovation, the less likely people were to adopt it. As a result, we often find ourselves looking for simple solutions so that we don’t have to think about a problem any longer. The first thing we all want is to ditch those negative thoughts. It’s hard to fight this urge, and it’s even harder to fight that a simple model may not be the right answer. We want the simple answer to be right and will reject more complicated models unless there’s a clear and compelling reason to accept them.

The more that we can create a mindset of continuous growth (see Mindset) and learning (see Peak), the more likely it is that someone will change their mind. This makes sense. Those folks who have a growth mindset expect that they’ll have to change their mind to grow, and that involves learning. However, too many people find themselves in places in their organization without an opportunity to grow in their responsibilities – or at least so they believe.

Instilling a lifelong love for learning may not be possible for everyone in the organization, but where possible, the ingredients that support growth and learning should be made available to those who are willing.

Ultimately, we must accept that we won’t change everyone’s mind and, despite our best intentions and efforts, there may be some people who are categorically unwilling to change. While we can’t expect to change everyone, we do know that love is capable of building bridges between the ways that people think – and the change of mind we want them to make. Ultimately, I think that you’ll love to read Changing Minds.