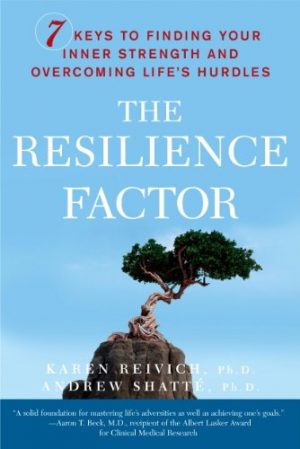 Resilience is a common term these days.  Everyone wants to build resilience.  Everyone wants to know how to make people recover rather than crumble from challenges.  I picked up The Resilience Factor: 7 Keys to Finding Your Inner Strength and Overcoming Life’s Hurdles, because I was looking for secrets that would have given Alex what he needed to be more resilient.  Life hit him with the loss of a former shipmate, and he couldn’t recover from it.  In the end, I didn’t find what I was looking for – but that doesn’t mean that you can’t.

The summary of the seven skills the book teaches are:

Three dimensions clearly indicate how well someone will respond to a situation.  Will they be resilient or are they likely to become hopeless?  The dimensions are:

Optimism – as long as it’s grounded in reality – is a good thing.  Barbara Ehrenreich criticizes it in Bright-Sided for deliberately ignoring things and self-deception.  However, I argue that we all have a bit of self-deception happening – and it’s not all bad.  It’s when our optimism diverges too far from reality that it’s a problem.  After all, as The Hope Circuit explains, learned helplessness was re-understood, with the capabilities of an fMRI machine and a map of the brain, to be the failure to learn control – even if we rarely truly have control.  It turns out that depressed people more accurately assess their skills – but that isn’t a good thing.

As Viktor Frankl explains in Man’s Search for Meaning, some optimism that is unfounded can be more harmful when the beliefs about what will be happening fail to occur.  As a result, the real trick is to find ways to look at the glass as half-full without deluding yourself into the belief that it’s completely full.

Despite what The Resilience Factor says, cognitions don’t cause emotions.  They’re related and they influence emotions, but they don’t cause them.  Lisa Feldman Barrett explains in How Emotions are Made that they’re guided by physical reactions and then are shaped by our experiences and expectations.  A better understanding of how emotions are formed is found in Emotion and Adaptation, where Richard Lazarus decomposes the process and helps us to understand the mechanisms that are in place.

Daniel Kahneman explains in Thinking, Fast and Slow that most of our cognitive is spent in a basic pattern matching system he calls System 1.  In this mode, we look for patterns in our environment and do the actions that we did last time – if they were successful.  In this pattern matching mode, it’s hard to say that there’s cognitions happening.

So, while we know that how we feel about something, especially our previous experiences, shape our emotions about it, previous negative experiences in similar situations will unfairly cloud our perception of current reality.

It’s All in the Interpretation

If we break things down, our emotions and our resilience is in how we interpret a situation.  While there are stressors in the environment, it’s our reaction to those stressors that matters.  If we interpret negative outcomes of the stressor as high probability and high impact and judge that our ability to cope is low, we’ll be stressed.  The greater degree to which we’re able to perceive the stressor’s impact as improbable, small, and within our ability to cope, the less likely we’ll feel stressed.

Stress has serious long-term negative consequences that are well explained in Why Zebras Don’t Get Ulcers.  Suffice to say, the more we can avoid chronic stress, the better off we’ll be.

So, while it may seem like self-delusion and self-deception, when we ground our assessments in reality and evaluate things from the perspective of truth rather than fear, we are more likely to make accurate assessments and less likely to be emotionally triggered.

Visions of the Future

One key aspect of perspective that is useful is a perspective about a positive future.  In The Time Paradox, Philip Zimbardo shares how we all see time differently from past negative and positive to present fatalistic and present hedonistic – and to a future focused view.  When we have a positive future view of time, we expect that things will get better in time.

I often share that time has a very long arc, and things that appear to be intractable today may someday be solved.  Problems that we believe are unchangeable are all washed away in the sands of time.  Even the well-built pyramids of Egypt are fading over time – and statues like the Sphinx are in serious need of a nose job.  Nothing is forever.

Guilt has an evolutionary benefit of helping us to change our beliefs and behaviors based on negative outcomes.  However, our negative bias can get us stuck in processing and reliving our guilt repeatedly.  This approach to guilt – constantly reliving it – is bad for us and for everyone.  Once we’ve apologized, learned from the event, and hopefully changed our behavior, we need to learn to let it go.

Guilt that is internalized too much moves from being that we’ve done something bad to shame, which is the assessment that we are bad.  Shame is a sticky substance that is hard to free our psyche from and one that serves no purpose.

Most people don’t have a clear definition of anxiety, particularly in terms of how it relates to fear.  Fear is a specific concern about a specific possible occurrence.  Anxiety is a fear based in the idea that we can’t even tell where the threat will come from.  Anxiety is therefore more challenging to eliminate in our beliefs, because we’ve got very little to put our fingers on.

Anxiety at its core is the belief that we’ll encounter a stressor suddenly and that it will overwhelm our capacity to cope.  If we want to reduce anxiety, we need to focus on how we can authentically build a person’s sense of self-efficacy – or, said differently, their personal agency.

Many people with anxiety believe that they feel powerful and able to take on life’s challenges but generally there’s something buried deep inside that prevents them from fully believing in their value and ability to overcome.

Personal Agency, Self-Efficacy by Any Other Name

Our underlying beliefs can sometimes prevent us from accessing our personal agency.  We believe that we shouldn’t show our strength or that it’s not the right time or place.  Sometimes, our underlying beliefs about ourselves and about the world are so hidden that we can’t see them ourselves – even when we try.  Sometimes, they’re the echoes of the voices that we heard in our childhood that we now believe are our own.

Finding these beliefs is often about asking why, despite our desire to change, we’re not changing.  Immunity to Change is a helpful framework for discovering what limiting beliefs are holding us back.

The anti-power to resilience is catastrophizing.  That is, the propensity to evaluate things in the most negative possible light.  The stressor is certain, and its impact overwhelming.  A friend and comedian has a routine where he speaks about how his mom was a master at catastrophizing.  She went from he couldn’t take care of a dog to he couldn’t take care of a baby and he’d be arrested for child neglect – all in the space of a single breath.

We can dampen catastrophizing by attempting to ground our thoughts in reality.  Asking questions like, “Has this ever happened?  What was the result last time?  And what’s different?” can sometimes break us free from the grips of an overwhelming prediction.  Other times, it’s the question “So what?” that allows us to see the resources at our disposal.

If you want to be resilient, you’ll have to rewire away from catastrophizing, and Hardwiring Happiness can help with that.

Denying Existence of the Problem

The real limiting factor is our ability to believe that we’re understood, and sometimes in their attempts to help us, other people minimize our problems to the point of denying their existence.  If you’ve never ridden on a plane before and are frightened, someone saying that it’s the safest form of travel isn’t just useless, it’s invalidating your concerns without hearing them.

So, on the one hand, we can acknowledge that our catastrophizing isn’t reality – but on the other hand, we want others to follow our path and understand how we got there.  We need to be understood even if the perspective we’re taking isn’t objectively real.

When we’re looking at our resilience, it’s as simple and complex as looking for different alternatives, evidence, and implications.  It’s simple in that they’re just a few things to be done – but saying them is much easier than doing them.  Perhaps in that gap is The Resilience Factor.