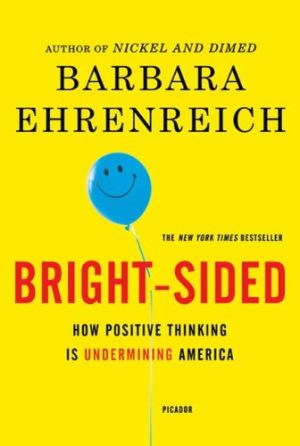 One of the most frustrating and hurtful things that can tell someone who is suffering is that it’s their fault. Bad things happen to good people, and it has nothing to do with their faith, their character, or anything other than the randomness of life. Barbara Ehrenreich starts Bright-sided: How Positive Thinking Is Undermining America with her story about how people expected her to disconnect from reality for the service of just being happy.

Ehrenreich recounts her confrontation with a breast cancer diagnosis. She shares how her negative thoughts and comments weren’t accepted or appreciated by others. In complete denial of what we’ve learned from Kubler-Ross’s work in On Death and Dying, the expectation is that patients must jump to acceptance without flowing through the natural grieving process. (The Grief Recovery Handbook is another good book on how to support those experiencing loss and therefore grief.)

The truth revealed in Worm at the Core is that most of us aren’t comfortable with our mortality, and when others are negative about their diagnoses, which may include death, we’re reminded of our mortality – and we’ll do whatever we can to avoid the pain we experience as we consider it. (See also Change or Die for more.) People start to move away from those who are experiencing the natural cycle of loss, because they don’t want to get too wrapped up in it.

The push towards positivity comes out of misguided belief but at least in some circumstances comes from a genuine concern for the other person. The problem is that, in the service of this ideal, they’re encouraging people to deny themselves and how they really feel, which we know creates other problems. (See How Emotions Are Made and Emotion and Adaptation for more.)

The one place here that I must take issue with Ehrenreich’s work is in the conclusion that the cancer death rates haven’t decreased from the 1930s to 2000. The problem with this statement is that it’s not true according to the Centers for Disease Control, which shows a death rate that’s dropped from over 30% to less than 20% since 1975. No argument that there is more to be done and we need to continue to work to eliminate this painful killer – however, statistically speaking, medical treatments have made an observable shift in the survival of patients.

Hope Is Not an Emotion

Ehrenreich further describes hope as an emotion and optimism as a cognitive stance. C.R. Snyder’s work The Psychology of Hope argues effectively against hope being emotion. Instead, hope is a cognitive process built on willpower (see Willpower and Grit for more) and waypower – or knowing how to move forward. Hope is, therefore, possible to be cultivated both through the careful cultivation of willpower and the discovery of paths that lead forward.

Optimism is, as she explains, a cognitive stance. It’s a way of viewing the world. It’s the proverbial glass half-full instead of glass half-empty. She says that “presumably” anyone can develop it through practice. The research says that people can develop healthier ways of managing self-talk. (See two different approaches to this topic in The Hidden Brain and Advice Not Given.) She complains that optimism may require deliberate self-deception and blocking out unpleasant possibilities.

It’s true that optimism does require deliberate self-deception. The problem is the implication that this is bad. The research says that the outcomes are better with optimism. Self-deception can be problematic (see Leadership and Self-Deception), but self-deception isn’t always bad. Self-deception can be useful when it leads us to more humility (see Humilitas) and greater compassion, including self-compassion. The other implication is that we don’t self-deceive otherwise. However, we know that we are always deceiving ourselves – the trick is to create consciousness of it and gain some degree of control. (See How We Know What Isn’t So for more.)

Ehrenreich seeks to transfer responsibility from the individual to society. She, like Happier?, points to income inequality as being unfair, and therefore it’s not fair to hold people accountable for their happiness. As with many of her arguments, there is truth. Income (and opportunity) inequality isn’t fair. However, as discussed in Hurtful, Hurt, Hurting, it doesn’t matter who hurt you, you’re responsible for the healing. It doesn’t matter whether you’re to blame for the situation or it’s something that was externally generated, you’re responsible for the recovery.

When Ehrenreich cites initial research that couldn’t be replicated, I nod my head yes. I know that most published journal articles results can’t be replicated. (See The Heretic’s Guide to Management.) Whether it’s a missing component in conditions specified in the original article or a fluke, replication of findings is important and widely missing. However, Ehrenreich angrily laments about how support groups don’t seem to help. Having been in the position of facilitating some support groups, I can say that there are functional groups and dysfunctional groups, and it takes a keen eye to see what works and what doesn’t.

Ehrenreich also rails against the National Speakers Association (NSA). I’ve previously recounted my experience with their national conference but never said directly that many of the people at the conference seemed to be wannabe speakers. Ehrenreich is more direct about that point. She also appropriately questions some of the speakers who are making it.

She explains the focus on positive messages, including some messages which aren’t founded on science (or reality). She specifically calls out the Heart Math Institute, which I address in my review of The HeartMath Solution. So, I can easily acknowledge the truth in the frustration with the focus on positivity. However, I’m reminded of a lesson I learned 30 years ago.

I was writing reviews. I’d get a piece of hardware, and I’d be expected to talk about how it would be helpful to readers of the magazine. The problem is that I couldn’t always do that. Sometimes, what I was sent was garbage in a pretty package, and I wanted to say that. My editor was a seasoned professional and explained that negative reviews weren’t useful to the readers, and therefore they didn’t get printed. I’m sure there was some degree of pressure for advertising revenue, but the point stuck with me. People want to know what works, so they can use it or replicate it. They don’t want to know 1,000 ways to not make a lightbulb – they care about the one way to do it. (See Find Your Courage for more on Edison.)

One of my favorite quotes about quantum physics is that “anyone who claims to understand quantum physics doesn’t.” Whether it’s the Heisenberg uncertainty principle or Schrödinger’s cat, the concepts are difficult for anyone to grasp. Ehrenreich appropriately challenges speakers who believe to have a master’s grasp on quantum mechanics and why these are a force for positive energy in the lives of their audience.

I interpreted this to justify magical thinking. It made me wonder how their childhood development might have been disrupted or interrupted. (See Erik Erikson’s Childhood and Society for the stages.) I know that we used magic and superstition to explain things that we couldn’t explain – and to supply the raw ingredients for unbridled hope. Ehrenreich appropriately pushes back.

The Religion of My Church

Similarly, she challenges evangelistic preachers who promise that God wants you to have everything you want if you only have sufficient faith – and, presumably, tithe appropriately. The problem with this is these preachers have presumably never really understood the Bible they’re claiming to quote. As I explain in my post Faith, Hope, and Love, faith is literally always a gift from God. It comes from prayer, which is exchanging worries for faith. I suppose that this would cause them to simply change their admonishment to claim that you’re not praying enough. (You’re called to pray unceasingly, which is a bit impractical with that whole problem of sleep.)

She cites the rise of megachurches and those churches that came from charismatic preachers who studied what people wanted in a church before starting their megachurches. The problem is that churches are – overall – struggling. Churchless, The Great Evangelical Recession, and Robert Putnam’s Bowling Alone contradict the view that overall church attendance is growing. Admittedly, it’s possible that it’s becoming more focused into megachurches, but her point seems to be that churches are now delivering positive messages so they’re not driving away parishioners.

Near the end of the work, Ehrenreich asks the question, “How can we expect to improve our situation without addressing the actual circumstances we find ourselves in?” The answer is to change your view on the situation. Certainly, if you’re struggling to have enough food, simply being happy about it won’t solve your problem. However, believing that you have the capacity to change your situation today creates the opportunity that you’ll do it tomorrow.

It’s my experience that people must first change their perspective, their mindset (see Mindset), before they’ll be able to change their circumstances. They need to see things differently, so they see the problem in a way that makes their circumstances easier to deal with. We know that stress – which is entirely driven by our perceptions – reduces our creativity with solutions. (See Emotion and Adaptation and Why Zebras Don’t Get Ulcers for perceptions of stress. See Drive, Diffusion of Innovations, and Why We Do What We Do for the impact of stress on innovation.)

If you want to find a healthy relationship with positive thinking, perhaps you need to read Bright-sided so you’re not ambushed by positive thinking unrelated to reality like Ehrenreich was.