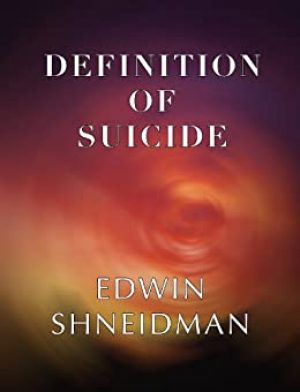 It’s hard to address something that you don’t have a clear definition of.  That’s why Edwin Schneidman wrote Definition of Suicide.  He’s not the only person to tackle this definitional challenge, but he may be the person with the most experience.

A Rainbow of Colors

There have been numerous taxonomic approaches to suicide that often describe the lethality of the method chosen and the degree to which the suicide was intended.  The Neuroscience of Suicidal Behavior tackles the problem with these as well as the degree of planning involved.  However, as was highlighted there, there is invariably a continuum that things fall on that are difficult to distinguish.  For instance, what differentiates a parasuicide from a suicide?

More frustratingly, intent is very hard to infer and is therefore a dimension of great question, as Assessment and Prediction of Suicide reveals.  Schneidman’s own The Suicidal Mind explains that he believes communication of intent is a part of suicide.  (Since then, several others have questioned the percentage of people who do communicate their intent.  In particular, see Rethinking Suicide.)

Emile Durkheim is at the root of suicide research – but sort of accidentally.  His primary interest, it seems, was the application of statistics to public health concerns.  It turns out that one of the examples that he used was suicide.  As the first work of its sort, it is something that everyone comes back to – and unfortunately replicates.

Francis Bacon, whose scientific method helped to crystalize science, also wrote of philosophical works.  One aspect of those works that Schneidman calls out is the concept of idols – or sources of bias in our thinking.  Bacon’s idols, as explained by Schneidman, are:

These are perhaps some of the earliest views on cognitive biases.  It’s how we see things differently than they really (or objectively) are.  (See Why Are We Yelling and Thinking, Fast and Slow for more about cognitive biases.)

A Time for Dreaming

Death and sleep are often compared as relatives – sometimes as close cousins, and other times as siblings.  Sleep brings us relief, a chance to stall our pain and dream of happier times – either in the future or the past.  With the close relationship between death and sleep, it’s possible to see how some might desire death as both an ending of their current pain and, in a warped sense, how it might give them a chance to live the life of their dreams.  It’s possible to see how it seems more desirable.

The overlooked item, in the cognitive constriction of suicide, is that sleep returns to wake where death does not return to life.  While a decision to sleep is temporary, a decision to die is irreversible.

A challenge with some who die by suicide (or attempt) is that they feel somehow less than human and therefore undeserving of the grace and love that all mankind should show to one another.  In Moral Disengagement, Albert Bandura explains the need to make people less human to be able to inflict harm on them.  Phillip Zimbardo expresses a similar perspective in The Lucifer Effect.  What if suicide isn’t murder in the 180 degree, as Menninger suggests in Man Against Himself?  What if the thing that’s turned against someone is their belief in their humanity?  Schneidman shares one example where someone describes herself as an “it” or a “thing.”  Those sorts of descriptors minimize her own humanness.

The situation that created those feelings were stories I’ve heard before.  Pregnancies that were initially twins where one died in utero, and the parents told the surviving daughter that she killed her sister.  Another case where a father openly told his son that he should have peed inside his mother.  The list of these harmful parental responses to children is long, and unfortunately, the outcomes aren’t good.

Who Needs the Afterlife?

Sidestepping the topic of who God is, what our purpose is, and all of the religiously entangled parts, there’s an interesting question about who needs an afterlife if the life here is better.  Of course, whether you believe you’re coming back as a cow or you’re going to heaven, there’s no need to dislodge that belief.  But a more interesting question is one about what we can do now, regardless of our beliefs about afterlife.  What can we do to improve how we treat other humans such that we want them less harm?

Jonathan Haidt in The Righteous Mind proposes that we all have the same foundations of morality, the first of which is care/harm.  In short, we believe in more care and less harm.  However, despite this framework and the work of Robert Axelrod that confirms our cooperation isn’t an accident, and in fact is part of the Evolution of Cooperation, we find that too many people are suffering.

Improving someone’s condition even a little bit will help them make a different decision than suicide.  Instead of feeling hopeless, the improvement switches on The Hope Circuit and allows them to see that things can get better – since their degree of cognitive constriction may prevent that without a spark of hope.

In The Psychology of Hope, C.R. Snyder explains that hope is composed of two components: willpower and waypower.  There’s an aspect of this that he doesn’t address directly, which is the degree to which you believe the rest of the world is friendly or hostile.  In a hostile world, someone is always trying to prevent your success, while a helpful world is constantly trying to help you achieve your goals.  (This is the work of John Bowlby and Mary Ainsworth, and you can find more in The Secret Lives of Adults.)

However, even with a helpful view, you can get stuck in feelings of loneliness, which prevent the connection necessary to expect the world is helpful.  In Loneliness, it’s explained that loneliness is different than the state of being alone.  It’s about that sense of connection – and it can be critical.

The more we can help people who are feeling lonely feel more connected, the better off we all are – whether they’re suicidal or not.

Another way to envision suicide is that it’s declaring bankruptcy on life.  It’s the decision that you can’t make it better and you want to give up.  While this is tragic from the person’s point of view, it’s more complicated from the point of view of the others their life impacts.  Specifically, it means that people who knew the person feel as if their memories and experience with the suicidal person are somehow less important – at least less important to them.  They may even believe that the suicide invalidates their beliefs.

It’s easy to speak of the logical pieces of the situation.  Their pain.  The cognitive constriction that prevented them from seeing these memories.  However, that doesn’t help the hurting survivor who wonders what they could have done or why their perception of things was so different.

In the end, there may not be a suitable Definition of Suicide, it turns out we each may need to understand it in our own way.