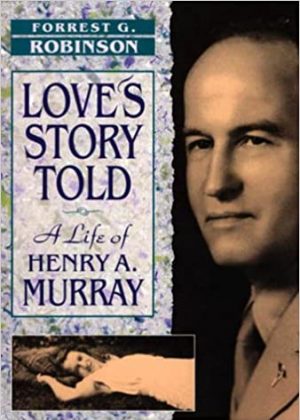 It was a secret love affair for over 40 years.  It was two preeminent psychologists.  And it’s difficult to get to Love’s Story Told: A Life of Henry A. Murray without stumbling between the public appearance and the private relationships.  I came to Murray through his work with Christiana Morgan and the Thematic Apperception Test (TAT).  It’s a popular projective test like the Rorschach inkblot test, and it has some of the same challenges.  But I’m way ahead of myself – I need to take a step back and explain Murray and the loves of his life.

Wealthy, Even by Wealthy Standards

Murray was born to a well-to-do family and spent his time at boarding schools before heading to Harvard for his education.  He didn’t seem to be constrained to any one place or even continent as his life seemed to have him constantly traveling from America to Europe and beyond.

As might be expected from someone who grew up with wealth, he enjoyed rum, rowing, and romance.  Much is made of his battles with a professional coach for the Harvard rowing team and the rivalry with Yale.  It seems as if these challenging moments pushed Murray as much as his schoolwork.

Jo was born to wealth herself, and after a short courtship, she and Henry were married.  Their marriage was described as more helpmate and “pal” than romantically driven.  Their marriage was outwardly positive but internally driven by challenges of infidelity.  In addition to the “40-year secret love affair,” there are at least two other chronicled dalliances.  While Jo was certainly aware of the “secret love affair,” it’s unclear about the others.

Ultimately, Jo felt as if it wouldn’t be acceptable to divorce Henry, and he felt the same, so they remained married even after the big secret was revealed.

She had a husband as well.  Will had Christiana’s hand in marriage.  In fact, the two couples traveled together – and separately – before Murray’s romance with Christiana.  It was certainly disappointing to Will and Jo that Christiana and Murray had an affair, but it was something that both seemed resigned to.  Will because he devoutly loved Christiana and seemed willing to put up with almost anything to have her, and Jo for the social implications.

Christiana would come to work with Henry at Harvard and would co-author the Thematic Apperception Test (TAT) but not before both Henry and she had visited with Carl Jung.

Jung is probably only second to Freud in terms of recognition in the world of psychology.  His work is the genesis for a large number of works including the Myers-Briggs Type Indicator (MBTI).  (See The Cult of Personality Testing for more on MBTI.)  However, most interestingly, Jung had a former patient, Toni Wolff, as a lover with the consent and perhaps even approval of Jung’s wife, Emma.  This was the legitimization that Murray and Morgan needed.  Sitting for tea with Emma, Toni Wolff, and Carl had to have been an odd experience.

Morgan and Murray’s relationships with Jung continued for years and only really stopped when it became apparent that Jung was using Morgan’s visions as the source for his Visions seminars.  The realization that this secret was on the verge of getting out caused Murray to interject and ask Morgan to stop sharing her visions with Jung.

Jo, for her part in the story with Jung, considered him to be a “dirty old man.”  However, she did seem somewhat more settled after the talk where he explained that Murray was not that different than other men.  This hearkens to the duality of sex as explained in Anatomy of Love, where we profess monogamy with discrete affairs on the side.

Jung explained that Wolff exposed him to the sense of the underworld.  Morgan did the same.  She was able to flow with her feelings and consciousness that seemed unreachable to both Jung and Murray.  Neither man could on their own be so free flowing, and thus used the women as ways to investigate the emotions that they couldn’t themselves let out for fear of losing themselves to it.

Christiana continued to explore the underworld of her psyche with visions and artistry long after she stopped sharing with Jung.  It was this exploration that led her and Murray to the thought of the dyad.

Morgan and Murray believed that, in working together, they could perfect love and share it with the rest of the world – when the time was right.  She would bring visions, emotions, and artistry.  He’d bring cold, calculating reason.  Together, they believed that they could unlock the very secrets of love.  They never completed their mission.  Both, in their own language, eventually would declare their work a failure.  Through 40 years of effort, they’d struggle to understand, define, and document their experiences, and they’d ultimately fail.

The scribe for their endeavor was Christiana, who seemed much more taken with the idea. Henry’s writings are a small portion of the content available from their experiences.  It seemed that the differences in their worlds would pull them apart, bring them back together, and ultimately torture them both.

After their initial love making session, Christiana and Henry were apart for about a year.  In fact, there were many times in their relationship of 40 years when they were apart.  The sketches have Henry traveling with and without Jo across Europe, and Will and Christiana taking separate roads of their own.

Despite the long-term view of a 40-year secret love affair, there were many periods when the pair weren’t together.  However, more importantly, their goals rarely were.  Christiana routinely wanted more than Henry was willing to give, and Henry wanted more out of life than Christiana.  This set the stage for the fundamental disconnect in their relationship.

For Christiana, the dyad was the thing.  For Henry, it was a thing.  Though he acquiesced about his fascination with Herman Melville and his desire to write a book about him in favor of the dyad, there seem to be many cases where the dyad wasn’t as important as his work in the clinic and, particularly, his book, Explorations in Personality.

No love story is complete without sex, but here the sex wasn’t a part of the love making process as it was a way for both of them to recover from pain.  In the later years, there was Christiana’s desire for pain and domination and Henry’s struggle with the process.  It’s fair to say that for Christiana the sex and the pleasure associated with it was a primary aim, where for Henry it seemed to be secondary.

More broadly, Henry is said to have lived with a great deal of guilt for the pain and turmoil that he inflicted on both Jo and Christiana.  His guilt, though well hidden, never left him.

My first experience with Henry Murray and Christiana Morgan was through the TAT.  During a custody evaluation an evaluator used this test among others to try to determine who was a better suited parent.  I found out later that the TAT is prohibited from expert testimony in federal court cases because of its lack of reliability.  (See Science and Pseudoscience in Clinical Psychology and The Cult of Personality Testing for more on the challenges with this test and others.)  It’s at that time that I picked up the book Love’s Story Told, because I was curious about Murray and how he created a test like the TAT.

I learned that many of his contemporaries were cautious about the lack of rigor and science in his work; despite that, the TAT became a widely popular test.

The real reason for making a point of reading the book was because of suicide.  Edward Shneidman was a student and fan of Henry’s who went on to lead the Los Angeles Suicide Prevention Center for many years and became an accomplished, well-respected suicidologist and author.  In The Suicidal Mind, he spoke about his appreciation for Expressions in Personality, and I knew I’d want to read it – but I decided I wanted to do that after I had a chance to learn more about the man behind the book.

What I didn’t realize was that it was Shneidman who would be entrusted with the letters and items for the dyad, nor that there would be so much suicide in and around the couple.

The Suicides in Murray’s Life

While Will and Jo died normal deaths, many around Murray weren’t apparently so lucky.  Other “friends” of Christiana’s, like Ralph Eaton, died by suicide.  At least 6 of Henry’s preparatory school class of 29 died by suicide as well.  There are questions about whether Christiana’s death was a suicide.  Suicide, it seemed, surrounded Murray’s life.

The dyad wasn’t for everyone.  Even if it wasn’t the power-control fight that it appears to have become, with Christiana pulling for more of Harry and more sexual exploration and him longing for zestful thought, it would be hard work.  Both decided that it wasn’t going to be successful, but perhaps they glimpsed the kinds of relationships that folks like John Gottman would journey to discover years later.  (See The Science of Trust, The Relationship Cure, and Eight Dates for some of his work.)

It seemed as if both were so afraid of losing the dyad that they were in a constant battle to see who could control the other.  In the end, Love’s Story Told may have been more about control than love – but you should decide for yourself.