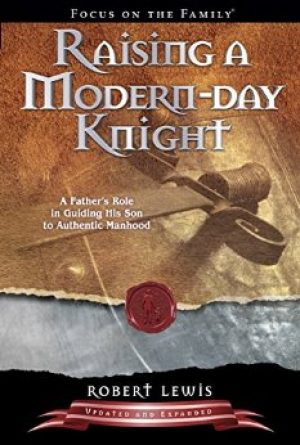 It’s been several weeks now since I got to attend a knighting ceremony. The queen wasn’t present and I wasn’t in a castle. It was my friend who was knighting his son. This ceremony and symbolic act of recognizing him as a man I would find out later from a book Raising a Modern-Day Knight: A Father’s Role in Guiding His Son to Authentic Manhood. I was curious what else the book had to say about raising boys, so I started reading and learning about knighthood.

The Meaning of Knights

We’ve all heard stories of knights in the middle ages. They wear shiny plate armor and ride in on a white horse. They joust and play games, they rescue damsels in distress, and they slay dragons. Wait, perhaps I slipped out of history and into mythology and lore somewhere along the way. That’s one of the interesting things about knights. They move from being a real figure in history into a mythical legend.

That seems to be in no small part because of the code of conduct they lived by – the honor that they carried so close to their hearts. Knights learned how to uphold a set of moral ideals that most of the people of the time couldn’t aspire to. As a result, knights eventually became nobility. Like the lords they served, they were set apart.

As a result, knights are the superheroes of the middle ages.

Of Pages and Squires

How does one become a knight? You start as a page. At this stage, you’re instructed on the basics of becoming a knight – not just the mechanics of weapons, but also the chivalric code of honor that a knight is expected to uphold. In this entry level position, you’re trained by squires – until you are promoted into that rank.

Squires continued their training with knights – or, more accurately, one specific knight – who refined the mechanics of weapons and clarified what it meant to uphold the code of honor. In a classic apprentice, journeyman, and master approach, pages became squires and squires became knights. (For more about the apprentice, journeyman, master progression, see my post.)

The moment that a squire became a knight was a big deal – it was a ceremony.

Somewhere along the way we’ve lost our love of ceremony. Teenagers are skipping their graduation because they don’t want to “waste their time.” We treat life transitions as if they’re just something that happen. We don’t demark them with a feast or banquet or ceremony. In our hurry up, get it done and move on to the next thing world, we’re not interested in recognizing others for their hard work.

When you don’t have a clear ceremony to recognize the achievement, how does one know when they’ve achieved a goal? Sure, a piece of paper is nice and it appeals to your logical side, but where is the emotion of accomplishing the goal? Where’s the pride? Even the Buddhists, who are widely regarded as not having an interest in attachment or pride, acknowledge that pride isn’t all bad. (See Emotional Awareness for more on the views on pride.)

Young men and boys today rightly struggle to when know they become a man. Is it when they learn to drive? Turn 18? Turn 21? Get married? Have sex? The problem with trying to help boys and young men know when they’re a man is that there’s no one defining event that truly turns a boy into a man. There are multiple different yard sticks to be measured on. The challenge is how do you know which yardstick to use?

The Meaning of a Father

It’s no secret that children need their parents – both their father and their mother – and that there’s a large number of social issues that come from fathers being absent. (See Our Kids for more on the importance of fathers.) A son not knowing when he becomes a man isn’t the biggest issue. The biggest issue is a son not knowing what it’s like to be a man. The biggest problem is that our sons don’t know what the code is that they’re to live by. The example that a father sets can serve as a guidepost or a lighthouse as to what they should do themselves.

There are a set of values – unique to each father to some extent – which need to be passed down to our sons so that they can know what their personal code of honor should be. I’ve softened this from the single view of one code of honor because of my awareness that we’re all different and have different values. (See The Normal Personality and Who am I? for more.)

Despite the need to apply our own “coat of arms” to the process of developing an honorable code in our children, Raising a Modern-Day Knight offers these suggestions for the foundation:

This seems like a good place for us to start.

The Fellowship of Knights

Ultimately, it’s more than a father or a code of conduct that helps a boy become a man. A father has the potential to be the largest influence on a boy in his journey to manhood, and the code of conduct that he sets forth will be the foundation for how the son forms his own values; but the influence of the outside world and particularly the other noble men in his life shouldn’t be understated.

I’m thankful for the powerful friends I have who can also help my sons learn how they need to conduct themselves. I don’t mean powerful in terms of money or prestige. I mean powerful in the sense that they have a strong sense of the men that they want to be. I appreciate their friendship with me and by extension their watchful eye over my sons.

While we no longer live in villages where everyone could support the growth and development of our children, it still takes a village to raise a child. It’s just that today’s village is much more virtual. The days when all the neighbors knew where the children were and were watching over all of them are gone. We’re locked inside our own little worlds so it’s not the same, but the need for other powerful men in the lives of our son remains. (See Bowling Alone for being locked away in our own little worlds.)

Fathers: our sons need us. Even when they push us away. Even when they tell us we’re a bad father. Even when they tell us that they don’t like us. They’re still listening and watching. Keep up the fight. Call in reinforcements if you need to, but don’t give up on your sons. If you recognize the need perhaps it’s time to decide how to create your own ceremony, so that you can go through the process of Raising a Modern-Day Knight.