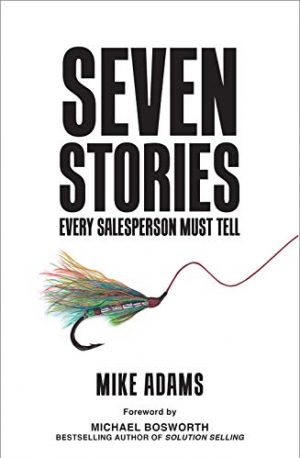 Stories are narratives that help others put pieces together, and while many of the stories we encounter in the media and in the movies are fictional, the kinds of stories you’re implored to tell in Seven Stories Every Salesperson Must Tell are non-fictional.  They’re the stories that allow you to connect, differentiate, and ultimately close the deal.

Of course, there’s content to a story.  There’s the “who.”  There’s the “what.”  There’s the “when.”  However, these components by themselves aren’t a story any more than flour, water, sugar, salt, and yeast are a bread.  There are plenty of guides to help you learn how to craft a story.  I’ve reviewed Wired for Story, Story Genius, and Building a StoryBrand, all of which can help you craft your experiences into a telling story.

Mike Adams is not focused on the development of the story itself, rather he’s walking us through what stories are important, why they’re important, and when they’re needed.  He does, however, offers a simple, four-step story design:

Who Closes the Deal

Before delving into the stories, it’s important to recognize that it’s not our reason that closes the deal.  The rational rider on top of the emotional elephant has the role of press secretary – not chief executive officer.  Jonathan Haidt developed an Elephant-Rider-Path model in The Happiness Hypothesis that Dan and Chip Heath picked up for their book, Switch.  The short version is the rider is our reason, rationale, and consciousness.  The elephant is our feelings – and they always win when they want to.  In The Righteous Mind, Jonathan Haidt clarifies that our rider acts much like a press secretary – making up plausible sounding reasons for whatever the elephant decides.

This is an important point because stories engage us emotionally as well as rationally and can therefore persuade us to act.

Adams makes the same point that was made in The Body Keeps the Score that we are fundamentally prediction engines.  It’s the primary purpose of consciousness.  He further makes the assertion that we update our world model when our predictions fail.  I’d qualify this with “sometimes.”  Sometimes, people deny reality and ignore the truth.  Sometimes, the corrections come in the form of laughter.  Inside Jokes explains that we laugh because our expectations were violated – and we detected it.  We’re rewarded with dopamine for correcting our mistake – without getting hurt.

The fact that we’re prediction machines that are constantly making corrections is important, because it means ideas that we submit to others, which are too outlandish or divergent from their beliefs, may be rejected as bad data rather than causing us to update our model.  When we’re communicating with clients, we’re constantly pushing the envelope so that we’re inside their acceptable range and far enough out that they might move it.

Adams also explains that there are five selling archetypes:

Of course, there are other models, like those found in The Challenger Sale; however, the models here work just fine too.

There three stories that are designed to get customers to want to know more about you:

These stories provide a way for the customer to connect and identify with you, your staff, or the company itself.  These stories are designed to get people comfortable with who you are.

The two kinds of fight stories are:

These show why you’re the right people to work with.  They differentiate you from your competition and from the rest of the world.  These stories are critical, because insiders often place too much emphasis on small differences.  Clients want to know why we’re the only people that should be helping them.

There are two land stories:

These stories are to help you land – or close – the deal.  They share that you’re aligned with their values and that you’re going to be a partner with their development – as well as solving the specific problem.

The key thing that you need to remember when telling all the stories to your customers is that they are the hero – not you.  Your goal as a product or service provider is to act as their guide so that they can be successful.  That’s the point of Seven Stories Every Salesperson Must Tell.