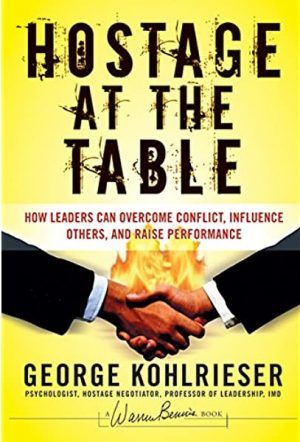 When you can look at the topic of conflict from the eyes of a hostage negotiator, you realize that it’s a unique opportunity. Few people have the role of hostage negotiator, and it seems like it’s a role that involves nerves of steel and powerful charisma. However, at the same time, it’s easy to think that the skills necessary for hostage negotiation aren’t skills that would be generally applicable to your day-to-day office environment. It’s rare for Suzi to hold a plastic utensil to the throat of Bill and threaten to hurt him if her demands aren’t met. (Whether the plastic utensil could hurt Bill is another question.) While, tragically, workplace violence happens, it’s rare. However, the applicability of the experience of a hostage negotiator extends to all conflict.

Hostage at the Table: How Leaders Can Overcome Conflict, Influence Others, and Raise Performance is a former hostage negotiator’s effort to take people into the experience, so the power plays, the victimization, and all conflicts can be addressed in ways that leave everyone more whole than when they started.

In a literal sense, most folks don’t make themselves a hostage. However, in a figurative sense, people often end up as hostages of their circumstances – or, as The Anatomy of Peace describes it, their boxes. We become hostage to our beliefs and perspectives, and we particularly become a hostage to our victimhood.

Martin Seligman and his colleagues, including Steven Maier, discovered learned helplessness in the late 1960s. Maier’s further research – with the help of an fMRI – indicated that it wasn’t learned helplessness at all. It was a failure to learn control. (See The Hope Circuit.) However, the result is still the same. Once a dog has learned that it can’t escape a mild shock, it stops trying. Even when it’s clear that escape is possible – and even easy – the dog wasn’t interested in freeing itself. The experience of learned helplessness is a trap. It holds us hostage to our beliefs that we can’t do anything about our situation. Like backing a wild animal into a corner, it’s dangerous, because you never know what might happen.

The Address of Victimhood

Victimhood is a place we all visit. We believe we’ve been victimized and feel frustration and anger. However, while victimhood is an ok place to visit, it’s a lousy place to build a home. Staying in victimhood is more than just feeling as if we were victimized one time. It’s the feeling that the situation is permanent, that we’ll always be victimized. It’s about us and who we are, so we can’t escape it.

The people who were able to escape from being a literal hostage are often those who never saw themselves as a victim. They refused to believe that they were powerless. They accepted their current reality but never gave up on changing it. Victor Frankl explained what helped concentration camp survivors make their way out in Man’s Search for Meaning. It wasn’t just some blind sense that someone would come rescue them – because, eventually, when that reality didn’t happen, their hope would be crushed. (See The Psychology of Hope for more about how hope works.)

One could easily conclude that a religious leader was wrong if they prophesized an event and it didn’t happen. The followers could look upon themselves and wonder how they could have been so misled. However, that’s not what happens most frequently. What happens most frequently is followers become more convinced that they were right. In Influence, Robert Cialdini explains how this process works.

Powerful forces lead us to lack of hope, learned helplessness, and descending deeper and deeper into our beliefs that the problems are internally generated, permanent, and global. The greater degree to which we see our circumstances this way, the more convinced we become that it’s our fault, and there’s nothing to be done. (See The Hope Circuit for more about attribution of circumstances.)

Of course, the instant response to “People don’t kill people” is “What is murder, then?” However, that is not the point that George Kohlrieser is trying to make. The point is that people don’t kill people – they kill objects. To allow themselves to kill, they’ve necessarily dehumanized the other person so that they’re now an object. Martin Buber in I and Thou helps us to understand how our interactions often drive us towards dehumanizing people and how that diminishes our relationships with them. Albert Bandura is more direct in Moral Disengagement, explaining how situations like the Nazi concentration camps could happen.

The more we can help ourselves and others see everyone as people – and not objects or sub-human – the better our chances at preventing violence.

One of the statements that caught me most by surprise was when Kohlrieser indicated that he’d never seen a hostage situation start by anything other than loss. The trauma of a loss triggered some sort of change that made the hostage-taker feel like taking hostages was the only way to be heard and have their needs addressed. Hostage-takers didn’t proceed out of a sense of power or strength, they proceeded out of despair and desperation. It’s as if their powerlessness first took them hostage, and then they took others hostage.

The solution to both literal hostage-taking and the figurative hostage-taking that happens in our mind is bonding. That is, connecting with the hostage-taker whether in our brains or literally, is our way out.

It’s fundamental to the human condition to need bonding with other humans. Our bonding mechanisms can become disrupted, and when they do, bonding becomes more difficult – sometimes difficult enough that it might be described as Intimacy Anorexia. At a lower scale, it may be found as people having difficulty relating to other people. (See The Secret Lives of Adults for more about how to form bonds with different kinds of relationships.) A failure to be able to bond to other people can result in loneliness, which has huge negative health implications. (See Loneliness for more.)

An area of bonding that’s most often overlooked is the bonding with ourselves. That is, how well do we accept who we are and talk to ourselves in a healthy way? Perhaps you’re a fan of Jonathan Haidt’s Elephant-Rider-Path model for how we coordinate the different aspects of our personality or you prefer to think in terms of Daniel Kahneman’s System 1 and System 2. (See The Happiness Hypothesis and Switch for the Elephant-Rider-Path model and Thinking, Fast and Slow for System 1 and System 2.

As I mentioned above, there are some people who more or less refuse to remain hostages. They focus on their capacity to free themselves as soon as it’s possible to do so. High performers focus their minds on the positive and refuse to focus on the pains and challenges. They won’t get bogged down as they begin to struggle. They continue to tune out the unnecessary clutter and focus on only those things that matter. (Barry Swartz of The Paradox of Choice describes filtering as a basic function of consciousness.) High performers simply seem to be more able to filter out the clutter. When negotiating a conflict (both in the sense of navigating and, more traditionally, negotiating a position), the ability to filter out clutter is useful.

In Buddhism, there’s the story of the first dart (what someone else does) and the second dart (the way you process it). Basically, if you can ignore the darts people throw, you don’t have to throw darts at yourself. (See Resilient for more.) In conflict, our ability to remain neutral and detached serves us well. When we become emotionally engaged in a conflict, we’ve become the other person’s hostage. We’re no longer able to think rationally about what we’re doing.

The ability to remain emotionally detached is a goal for negotiators – of life. Dialogue quotes Richard Moon as saying that it’s not like the great masters never lose their center, it’s that they discover it sooner and recover faster. Such is the case with our ability to identify when we’re becoming emotionally triggered – and quiet our emotions quicker. In Emotion and Adaptation, Richard Lazarus explains that our emotions are one part stimulus and one part our appraisal of the situation. Specifically, it’s our ability to be okay.

One of the most challenging aspects of our emotional lives is the real probability that the hurt we feel today isn’t caused by today’s events but is instead by the traumas from our past. Certainly, we can express a real and plausible reason for emotions today, but many times, the emotions that happen today are echoes and repetitions of unhealed hurts from our past. They’re wounds that have never healed and scars that have created sensitive spaces in our souls.

The Not Knowing is the Hardest Part

We’ve all heard others say that it’s the not knowing that is the hardest part. From an emotional processing perspective, this is true. Once we know what the truth is, we can start the process of grief. (For more on the process, see On Death and Dying.) In our lives, we become hostage to the uncertainty and the fear that we’re not going to be able to survive what life throws at us.

Perhaps the hardest part about Hostage at the Table is not knowing whether it’s someone else – or it’s you.