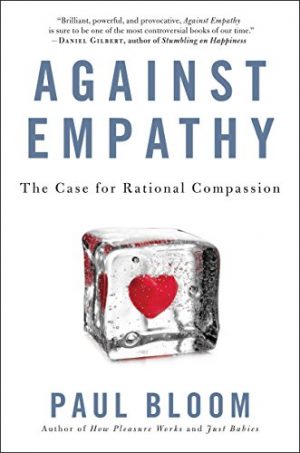 Who could be against empathy?  Isn’t it a good thing?  Don’t we need it to relate to one another?  How could someone, Paul Bloom, write a whole book about why empathy is bad?  The answer is a surprising journey into what we mean when we say “empathy” and the negative side of what is seen as a wholly good response.  In Against Empathy: The Case for Rational Compassion, Bloom decomposes what we mean when we say “empathy” and suggests that we should focus on only the “good” parts of empathy while finding ways to side-step the problems.

A good place to start is the fact that we use empathy to mean two relatively distinct things.  The best definition of empathy that I’ve seen is “I understand this about you.”  It’s a simple expression that equates empathy with understanding.  When I’m understanding, I can mean that I understand, cognitively, what your world is like.  I understand the environment, the factors, and the connections to other people.  To understand affect is to understand how the other person feels.  That’s really what most people mean when they say that they have empathy for someone else.  They’re presuming that they can feel what the other person is feeling.

The Grief Recovery Handbook makes a point of saying that no one else can know exactly how you feel.  How Emotions Are Made speaks about how emotions are constructed from the experiences we have in the moment, in the past, and our processing of those experiences.  So, while we generally mean that we know what someone else is feeling when we say “empathy,” it’s probably more accurate to say that we can approximate someone else’s feelings rather than “knowing” them.

Fundraisers who are looking to get you to part with your hard-earned money to support a need in a far-flung land know that you’re much more likely to support a single person – particularly a needy child – than you are to write a check to support a city, a nation, or a cause.  Organizations have long since learned that a name and a picture together are substantially more likely to pull you in to get you to donate than a picture without a name – or a name without a picture.  In these cases, affective empathy may be good, but what happens when it’s a zero-sum game?

Consider that you’re told that there’s a waiting list of patients for a doctor.  They’re carefully prioritized so that the neediest children are seen first.  You’re given the profile of one little girl who needs help, but her name is way down the list.  You’ve got the opportunity to move her up on the list.  Will you?  When focusing on how she feels, her world, and her plight, many do move her up in the line.  However, this is a place where empathy works against us.

If you trust the algorithm the doctor uses to prioritize cases, moving this case up pushes down other needier cases.  In short, you’ve done a net harm by prioritizing this one case.  Your empathy has sensitized you to the one case but has blinded you to the larger implications of your decision – and this is the key challenge with affective empathy.  It blinds us.

Bonds That Make Us Free, The Anatomy of Peace, and Leadership and Self-Deception all point to the challenges that an emotionally activated brain brings.  We learn that our emotions often take control – and won’t let rationality get a word in edge-wise.  In Kahneman’s language in Thinking, Fast and Slow, it’s System 1 overriding System 2.  In the language of Jonathan Haidt in The Happiness Hypothesis, it’s the emotional elephant taking the rational rider where the elephant wants to go.  The truth is that our emotions have more control than we’d like to admit, and engaging them necessarily allows us to be influenced by our biases – which isn’t a good thing.

In the case of the girl, it blinds us to the tragedy of commons.  The tragedy of commons is a well-known parable about how individually rational decisions can be destructive to the whole.  The idea is that a town allows the residents to have their livestock graze on the town commons for free.  It is therefore in every resident’s personal best interest to have as much livestock as possible grazing on the commons.  However, when this is done collectively, the commons will be over-consumed and eventually no plants will be available for anyone’s livestock.  Rational decisions made by individuals about a common resource will eventually destroy the whole.  The girl’s case is a different form where to improve her treatment we must reduce others’ treatment.

If we’re encouraging affective empathy, we’re necessarily encouraging people to become triggered by other’s emotions.  This is the very thing that The Coddling of the American Mind warns us about.  When we’re worried about triggering other people, we become tentative, and our students and friends stop trying to understand other perspectives, because to do so may make them uncomfortable.  Instead of challenging ourselves to see and understand the world better, we shrink back into a place of safety.

Walter Michel’s Marshmallow Test may seem like a far cry away from trigger warnings – but the distance is much smaller than people realize.  The marshmallow test was about allowing discomfort in the short term for long-term reward.  Those who are focused on the need for trigger warnings are worried about their here-and-now feelings at the expense of their ability to cope with discomfort in the future.  Albert Bandura explains that desensitization to stimuli is an important technique in reducing phobias – and maladaptive responses of any kind.  In Moral Disengagement, he explains how people don’t want to accept responsibility for their part in larger amoral actions but instead become desensitized – either for better or for worse.

Weighing Now and Then

Ultimately, empathy in its focus on the here and now, blinds us – or partially blinds us – to the future impacts.  We’ll take the marshmallow now, because we don’t know about tomorrow.  We’ll buy on credit today, because the future is something vague that may never happen.  Both Daniel Pink in When and Phillip Zimbardo in The Time Paradox have addressed how humans perceive time – and it’s not second-by-second.  Instead, we tend to unequally weight the past, present, and the future.

Empathy, by the nature of the present focus, causes us to insufficiently consider the costs in the future.  To be clear, it’s not that being in the present moment is bad – it isn’t.  However, when we can’t evaluate the future consequences to our present actions and experiences, we’re failing our future selves and the conditions they’ll find themselves in.

There’s a challenge.  Empathy has a positive side but also the potential to be used for evil.  It’s empathy that allows cult leaders to drive followers to kill themselves and their children.  Just as it can be used as a powerful force for good, it can be used by evildoers to manipulate and trap victims.  This raises the question about how someone can feel what someone else is feeling and inflict harm.  The answer seems to come in the form of the difference between capacity – the ability – and the propensity – the willingness to do so.  It can be that people who use their capacity for empathy for evil may turn off this capacity while they’re harming the other person.

This ability to turn off – or turn down – empathy may be something that parents need to be able to discipline their children.  In The Psychology of Not Holding Children Accountable, I walk through all the ways that parents can be sucked into not holding children accountable, most of which are an inability to separate their child’s immediate pain from their own discomfort.

No one wants favoritism – unless the other person is favoring them.  We want our friends and family to favor us more than they might the random person on the street.  So, it’s more accurate to say that we don’t want others favored over us.  Empathy creates a favoritism for those that we’re feeling empathy for.  Favoritism in the animal kingdom isn’t absent.

Chimpanzees are more likely to survive to adulthood if their mothers are more social and supportive of other mothers.  It’s the kind of old-time social network that Robert Putnam talks about in Our Kids.  It’s where everyone looked out for everyone else.  Except that it’s not really everyone.  It’s those people who are in a network of commitments with you.  In an old book, Understanding Computers and Cognition, Terry Winograd and Robert Flores describe organizations as a network of commitments – societies, families, and friend groups fit the same model.

To maintain social order, we need more than just the kind of trust that Francis Fukuyama describes in his book, Trust: Human Nature and the Reconstitution of Social Order.  Trust does bind us together and enable us to be more collectively effective, but we need to accept that we need some sort of backup enforcement force to ensure that the rules of social order are maintained.  Rushworth Kidder separates moral and ethical problems based in part on societal conventions in his book, How Good People Make Tough Choices.

However, even the most generous thinkers about human nature recognize the need to have a mechanism for enforcing the social norms.  Jonathan Haidt in The Blank Slate and Robert Axelrod in The Evolution of Cooperation arrive at the same conclusion from two different approaches.  We need to be able to enforce the standards of behavior we hold – and that may mean hurting someone’s feelings or even hurting them.

However, it won’t hurt to consider whether you should be Against Empathy.