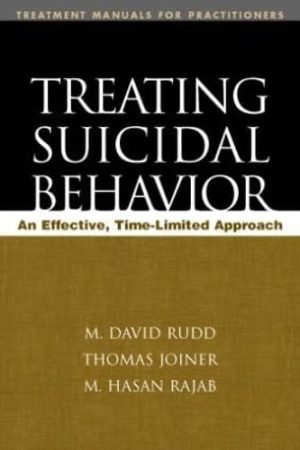 What started here would eventually become brief cognitive-behavioral therapy for suicide prevention (BCBT-SP).  In Treating Suicidal Behavior: An Effective, Time-Limited Approach, David Rudd, Thomas Joiner, and Hasan Rajab review what works in therapy of suicidal patients – and the current state of the literature.  Craig Bryan and David Rudd would publish Brief Cognitive-Behavioral Therapy for Suicide Prevention.  Of course, Thomas Joiner would go on to write Why People Die by Suicide and Myths about Suicide – among other works.

The book opens with a state of the art in suicide prevention for 2001 – and finds that it’s hard to identify the mechanisms of action for several studies, minimal clinical relevance for more, and plenty of mixed and confusing results.  This is true of 2001 – and today.

One of the things that seemed to elevate itself above the noise wasn’t a program specifically, but rather it was a component that seemed to be found in many of the effective programs.  That is the feeling that someone else cared about the suicidal person.  Whether it was Jerome Motto’s work with caring contacts or intensive tracking, it seemed that when people showed concern for the suicidal person – or appeared to show concern – it formed a protective bubble against the kinds of crisis that might cause a person believe that they are better off dead.  Perhaps, when others care for you, there’s always hope.

Motto’s work on what would be called “caring contacts” was first published in 1976.  The 2001 research, which confirmed the efficacy of the approach of sending letters randomly to those who declined treatment, wasn’t available as Treating Suicidal Behavior was being published.  As a result, the response in the book to the idea of caring contacts was tentative but hopeful.

Since then, the idea of caring contacts has proven to be a very cost effective intervention – particularly for those that are unwilling to pursue direct treatment of the things that may have brought them to suicidal ideation or a suicide attempt in the first place.

One of the challenges in the space of suicide even today is that the rates of suicide – and even documented attempts – are so low as to make it difficult to assess the efficacy of a program.  As a result, many research studies fall back to assessing impact on suicidal ideation.  The problem with this is that the degree to which this will impact the key metric – deaths by suicide – isn’t easy to predict.  Kirkpatrick’s Four Levels of Training Evaluation provides a reasonable framework to understand how asking for self-reports of how people feel about their ideation can be problematic.

It’s more challenging from the point of view that there’s no way to tell someone to not think about something without first bringing that thing to mind.  White Bears and Other Unwanted Thoughts makes this point quite clearly.  You can’t not think about a white bear if I tell you to not think about it.  So, talking about suicide makes it harder to not think about it – but not necessarily to not act on it, as the correlation between suicidal thoughts and ideation to action is rather low.

No Research for Inpatient Hospitalization

When most people think about others who have suicidal ideation and might attempt, they rather instantly think that the person should be hospitalized into an inpatient program – or even involuntarily committed.  There are numerous problems with this thinking; before that, it’s important to note that there is no study that proves that inpatient hospitalization is an effective treatment method.  In fact, there are studies that show the highest risk of suicide is the six months following discharge from an inpatient program.

There’s some anecdotal evidence that patients will lie to providers to get released so they can live without the rules and supervision – at least some of them for the purpose of making a suicide attempt easier.  Of course, other, less sinister explanations of the lowered psychomotor retardation of depression as it ends is another plausible reason for the problem.  Either way, discharge from a hospital inpatient program can be hazardous – with no proven efficacy for doing it in the first place.

One can easily forgive Mastering Logical Fallacies because they’re easy to make.  They are themselves a form of cognitive distortion.  They could be considered other variations of the kind of thing that Kahneman described in Thinking, Fast and Slow where we know that our thinking is biased and there’s very little that can be done about it.

The kinds of cognitive distortions seen in patients with suicidal ideation is a bit stronger.  They’ll give up on problem solving sooner – particularly related to interpersonal situations – and they’ll visualize fewer positive options.  It’s like they’re picked up a set of horse blinders and can only see what’s directly in front of them – even if they’re pointed in the wrong direction.  Therefore one of the skills that every potential suicidal person needs is the capacity to detect when their options are being narrowed into a state of cognitive constriction.  (See The Suicidal Mind for more on cognitive constriction.)

The Path to Suicide Leads through Cognition

Richard Lazarus in Emotion & Adaptation and Lisa Feldman Barrett in How Emotions Are Made agree – how we feel is mitigated through the lens of our cognition or thoughts about something.  If we want to address suicide we cannot ignore that even our affective feelings about things are influenced by our cognition – just as our cognition is influenced by our feelings.  If we are able to view things as positive and not a thread, then our feelings will follow.  Conversely, if we’re feeling depressed and hopeless then we’re less likely to see options and more likely to remain stuck “in a funk” because the nature of the affect makes it difficult to access positive thoughts.

Beck proposed four components of personality: Cognitive, Affective, Behavioral, and Motivational.  This framework is similar to the one used for the fluid vulnerability theory of suicide (see Brief Cognitive-Behavioral Therapy for Suicide Prevention), which is: cognitive, affective, behavioral, and physical.  Beck’s model respects the hidden influences that motivations have on us.  In The Hidden Persuaders, Vance Packard explains how hidden things motivate us.  Steven Reiss delves deeper into what motivates each of us in Who Am I? relying on factor analysis to reduce motivations into 16 key factors.  What most of us fail to realize is that we make decisions and then rationalize them in many – if not all – cases.  (See Noise.)

Many clinicians are concerned about the idea of being sued for malpractice when treating suicidal patients.  This concern shows up in the text as recommendations for detailed documentation during or following sessions and to document, immediately following notice of death, anything that may not have previously made it into the records.  There’s some practical guidance to respond with compassion to the family’s inquiries about the treatment that the deceased patient received.  All of this is good advice.  However, overall, the legal concept that is false is the idea that we can foresee a risk of death by suicide.

There’s a difference between doing best practices of screening and assessments and whether these best practices are effective or not.  Even the best clinicians can’t get above about 80% prediction in hindsight.  Shneidman was famously put up to this test, and his results, though good, were far from perfect.  The fundamental principle of foreseeability is flawed, because no one can predict with certainty those who will and will not die by suicide.  No tool, technique, or approach meets the standard for predictability required for admission as evidence in federal courts.  Federal court rules require that experts’ testimony must be based on scientifically reliable instruments.  This is conveniently side-stepped, because the issue is the failure to execute a test – a test that is not sufficiently reliable to be admissible in court.

I feel for those who have lost loved ones – whether the professional behaved at the level of professional practice or not.  However, fundamentally, the idea of legal proceedings based on the death fails to meet the basic legal premise of foreseeability.

It Gets Better in Time

So many things in life get better if you just hold on a bit longer.  The idea that things will – or can – get better is one of the challenges of cognitive constriction (see The Noonday Demon).  Depressed and suicidal people literally can’t believe that the situation will get better in time – and that time is likely not far away.  This is true of the emotions that people are feeling even if the underlying circumstances of their life may not change as quickly.  One suggestion for people who consistently find themselves back in this space is to create a mood graph that records how the person feels over time.

The tangible output of this exercise is a graph that shows that things do vary and to get better.  This is irrefutable evidence in the place of a perception that things will never get better.  If you’re unable to get a mood graph, sometimes recalling happier times can be effective – but be prepared: it will likely take multiple examples rather than just a single one.

When the Rules Change

Some people who are suicidal arrive there because their perception of the world has been so radically altered that they don’t know what the rules are any longer.  They had a world view that has been shattered and they quite literally don’t know how to predict the next moment.  This is possible anytime an underlying belief about the world is shattered due to an accident, betrayal, or loss.  If you believe the world is a generally beneficial place, and you suddenly discover a friend was murdered, you’ll have to change your belief system to match the observed outcome, and that’s uncomfortable.  As creatures that thrive on prediction (See Mindreading and The Blank Slate), we literally don’t know what to think when one of the major rules is changed.

It should be shared that this is one of the reasons why postvention is so important.  Often after the death by a loved one due to suicide, the fundamental rules of life are reorganized whether the loved one was a spouse (or romantic interest), a parent, a child, or a friend.  Helping the survivor understand how the world can function in a way that allows for suicide is a great way to care for them.

Recognizing that all of us hold belief systems that drive our predictions of the world can be good when talking with people who are considering suicide.  It allows you to look for, and then ultimately test, the beliefs that the person has about themselves and the world.  Often in a depressed or suicidal space, people will view things more negatively than they should – and, as mentioned earlier, they may have a hard time believing things will get better.  These beliefs lead to automatic thoughts that, though brief, can shape emotions and moods.

Ultimately, what you may find is that, though challenging, it may be important to understand Treating Suicidal Behavior.