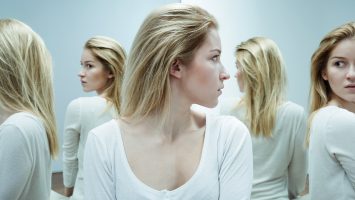 Everett Rogers described them as the laggards.  They’re the people who refuse change even when it’s become apparent to the majority that the change is for the better.  (See Diffusion of Innovations for more.)  A percentage of these people are paranoid that the changes they’re seeing in others will have disastrous effects – they’ve just not been seen yet.  They’re utterly convinced that they’re not paranoid, there is something wrong that will bite those who’ve already taken the plunge.

The most common solution for dealing with paranoia is to combat it directly with facts.  When the specific aspect of the paranoia is confronted with facts, it’s rarely helpful.  Jonathan Haidt proposed a model for how we make decisions based on the elephant, the rider, and the path.  The short version is that our emotional elephant gets his way when he wants, and our rational rider only has the illusion of being in control.  (See The Happiness Hypothesis and Switch for more.)  Directly confronting the elephant with facts that invalidate the feelings just activates defenses and causes it to ignore the rational rider altogether.

The solution is to not directly challenge the central fact that drives the paranoia but instead to listen, build trust, and remove some of the supporting beliefs that ultimately enable the paranoia to remain.

Too often when we listen, we’re focused on agreement: do we – or do we not – agree with the other person?  This gets in the way of us understanding what they’re saying and what their beliefs are.  Instead of being open to their perception being different than ours, we’re focused on right and wrong, truth and fiction.

Agreement is necessarily judgement-based, and therefore when I listen to the other person for agreement, I proceed from the point of view of judgement, whether I intend to or not.  By suspending judgement, I can listen only for their perceptions and work on my understanding before deciding whether I agree or not.

Something to Agree On

With a firm understanding, we can look for something to agree on – even if it’s small.  With agreement, we build a common bond and a platform for trust.  As we seek to develop even more commonality between their thoughts and ours, we’ll need to continue to build on trust.  Confirmation bias leads us to finding more of what we’re looking for, and by looking for areas of agreement we find more agreement than differences.  (See Thinking, Fast and Slow for more on confirmation bias.)

With a small agreement – something to build on – and understanding, we can move towards a bigger and better agreement about how we can work together towards the change that the organization believes is possible – or we can learn to agree to disagree.  We can help even the paranoid person to trust us enough to let go of their tightly held beliefs and give the change a chance.