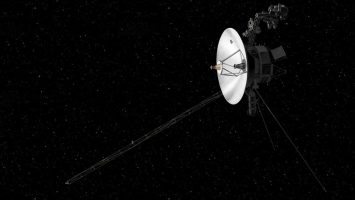 Lakshmi is the Hindu Goddess of wealth.  The problem is that if you chase her, she’ll avoid you.  Sarawati is the Hindu Goddess of knowledge.  If you pursue Sarawati, Lakshmi will get jealous and chase after you.  So, if you want wealth, the best strategy isn’t to pursue it directly.  The best strategy is to pursue knowledge and let wealth come to you, or so the story goes.

When we’re trying to change our organizations, lives, or anything, sometimes the direct path isn’t possible.  Sometimes the best – or even the only – approach is the indirect approach.

One of the amazing things that humanity has done is to have launched a probe beyond our Solar System – or rather to have launched two of them, neither of which had enough power alone to escape the pull of our Sun.  Voyager 1 and Voyager 2 both used a technique called gravity assist to accelerate beyond the solar system.  They used the pull of planets to accelerate them on their journey.  Through the mechanics of gravity, they took a relatively little amount of momentum and turned it into much more and escaped the pull of the Sun.

Sometimes our change efforts seem to be weighed down by the past successes of our organization.  These bright spots – successes – invite the question, “If it’s working, why change it?”  We know, of course, that what has worked won’t always work and cringe at the thought of doing nothing until we become organizationally extinct.

Sometimes belief in the truth – or the truth of the current approach – can be so powerful that it can’t be escaped directly.  It may need an initial disruption and then a redirection.  One way to do that may be to take us back to our childhood.

It’s a fantastic story.  One man with an army of elves and flying reindeer travels to every house across the globe and deposits presents for all the good boys and girls in a single day.  The mathematics are staggering.  Even accounting for the rotation of the Earth, the rate of present placement simply can’t be done.  However, you can’t tell that to a starry eyed three-year-old whose parents and grandparents have assured them of this fantastical story.

By about ten, most of us have heard the news.  Our parents and grandparents deceived us.  There is no Santa Claus.  Parents across the globe give their children presents and pretend they’re from Santa Claus.  It’s deception to be sure.  It could be called the largest conspiracy that the world has ever known – except it’s done to keep the magic and hope of life alive, so we all accept it.

Sometimes, the belief isn’t based on a deception.  It’s just a misunderstanding.  It was believed in ancient times that the Sun and all the planets circled the Earth.  Geocentrism was defended by the Church, and the heretical ideas of Copernicus and Galileo that the planets – including Earth – circled the Sun resulted in Galileo’s conviction and his house arrest.

It wasn’t that there was any intentional deception, but ideas which we held dear were eventually invalidated.

Once there’s an initial burst of energy as people recognize that not everything that we know is certain, we can begin to gently evaluate some of the tenets that we hold dear inside our organization.  Instead of clinging to an outdated notion that we’re in the movie rental business, perhaps we can recognize that we’re in the business of enabling entertainment, whether or not there’s a VHS cassette or DVD involved.

Perhaps, we can challenge seemingly immutable beliefs that we have to be in the office to be efficient or that teams can’t be remote.  There are dozens of hidden beliefs that can prevent us from accomplishing our change directly.  To be successful, we’ll have to find and dislodge these beliefs first – we’ll have to accomplish our change a bit indirectly.