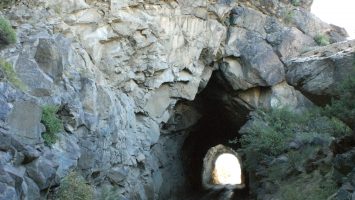 I was up on stage.  It wasn’t any different than the 50 other times that year I had been on a stage – except it was different.  Instead of a professional crowd, I was at the front of a comedy club.  The room was dark, and I couldn’t see anyone.  I walked on stage, and within a moment, the cord fell out of the microphone.  Normally, I would have made light of it.  I could have stared at the cord with a face that would make everyone laugh – but not that day.

My vision literally became tunnel vision, and I could only make out one friend in the front of the stage.  I kept thinking that I was bombing.  His face was amused but I couldn’t hear anyone else’s laughter.  Luckily, he was recording it and there was laughter from the rest of the room.  However, it was the first time I had been frightened on stage in over two decades, and I didn’t like it.  It was also the only time I’ve ever experienced tunnel vision that I could recognize.

Of course, I had options on the stage.  I could walk off and the emcee would appreciate the extra time.  However, I didn’t want to do that.  I wanted to continue no matter what was happening – or not.  I needed to get through my set so badly that I didn’t even care what was going on with the audience.  I needed the completion for me.

Sometimes in change initiatives, we get so focused on getting done that we can’t hear or see the feedback around us that should be pushing us forward or creating caution for us.  Alexander Pope said, “Fools rush in where angels fear to tread,” and I’ve certainly been that at times.  I’ve been unable to see where I should have stopped but instead, I continued.

In our change initiatives, we need to recognize that pausing, stopping, and even cancelling are options no matter how disastrous they may appear on the surface.  Too frequently, we continue down a bad path for way too long, and we do damage to ourselves, our reputation, and the organization along the way.  Our tunnel vision prevents us from seeing the broader and more important picture.

My friend’s reassurance that I did well wasn’t good enough for me.  He was biased after all.  He’d tell me I did good if people started throwing their meals at me.  While I needed his support, I also needed an objective way to establish how I really did.  I was lucky that he was able to record the session for me.  It left me with an unbiased record to which I could refer.

Too often, we fail to identify our goals and objectives to the level that we can establish the unbiased measurement of our effectiveness.  We can’t hope to accomplish a goal if we don’t know what the goal is – and how we’ll measure it.  Too frequently, we know the end objective we want, but rarely are we able to articulate the behaviors that we’ll need to do to reach the goal – and without that, we’ll have a hard time knowing whether we’re bombing, doing okay, or rocking the house.

Comedians know that you need to keep some one-line zingers in your pocket for when things go wrong.  You need these little things to give you the space to generate options – to expand your thinking in ways that allow you to be successful.

I knew I could generate a laugh without a word if I either stared at the cord incredulously – or if I mouthed some words and pantomimed a belly laugh before ultimately reconnecting the cable.  When the audience isn’t interacting, I know I can say, “You know this is live and I can see you right?”  I never fail to get a laugh – though sometimes it’s a nervous laugh.

Because I was afraid, my thinking was constricted, and I couldn’t even pull out these savers to get the routine truly back on track.  What is going on in your change that’s preventing you from using the tools you know you have – and need to use?