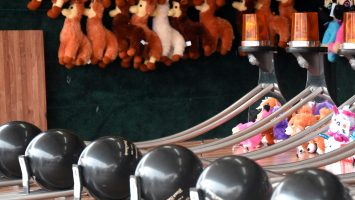 I was never very good at carnival games.  I’d throw a dart to pop a balloon and end up skewering a goldfish in the next booth over.  However, I was always intrigued by the bowling ball game.  It required just enough energy to get over the hill, but not so much that the ball would come back to you.  It was a delicate balance between too much and too little.  It’s like navigating the change productivity dip.

Every change manager knows that when you make a change from something old to something new, there is always a productivity dip.  The old way was automatic, natural, and routine.  The new method is different, awkward, and forced.  It takes time for the brain to adapt to the new way of doing things.  During that time, you can expect that everyone will be a little less productive.

Both the degree of productivity dip and the length of the dip vary with the change and the preparation that is done to minimize the impact, but it’s always there – and there are two ways to get stuck there.

The Wheels Fly Off the Cart

When I was young, I’d play with slot cars.  The cars would follow a groove on the track, and as the driver, you’d control the speed with a trigger in your hand.  You couldn’t just hold the trigger at full throttle, because the car would fly off the track during tight turns – and crash into the wall.  This is the first place that I learned that, if you went too fast, things would fly apart.  I learned the lesson again a few times – including once or twice in a real car, never knowing there was a problem until it was a bit too late.

Some changes can be managed this way.  Too much pressure.  Too much change.  Too few constraints.  The result has never been good, and in more than a few cases, it’s led to what I have often described as “explosive growth leads to explosion.”  Going too fast without enough control (or influence) has the tendency to end badly.  However, there’s an opposite problem: not going fast enough.

In babies, there’s a problem called “failure to thrive.”  It’s when the baby just doesn’t gain weight like they should.  They’re not getting enough calories to grow at the normal rate.  It’s often a signal that the baby isn’t getting enough nutrition either because of insufficient feedings or because there’s a problem preventing digestion and absorption of their food.  If the situation is left unaddressed, the baby won’t grow into a normal adult.  They’ll face several developmental problems, the least problematic of which is a smaller size.

Our change initiatives can face the same fate if they don’t get enough energy to get them kicked off and over the proverbial hump that the productivity dip represents.  We know that people don’t evaluate events on their totality.  They evaluate them on their peak and on their ends.  (See Change Anything.)  If you never have enough energy to get past the productivity dip, the last experience of change is a failure – and you begin to expect it.

The trick to the carnival game and to the process of mastering the change curve is to go fast enough to get past the productivity dip without crashing into the wall on the other side and sending the bowling ball careening back at you.  The good news about change efforts is that you can adjust the amount of energy after you start, to increase it if necessary or apply the brakes if it feels like you’re getting out of control.