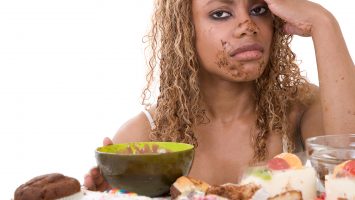 We say we want change, but why can’t we achieve it?  Sometimes, what we want and what we believe are in conflict.  Even if we can’t articulate what we believe, it can stop us from achieving the change we desire.

Each year, there are many New Year’s resolutions made, and many of those have to do with losing weight.  Whether we want to look better or we feel like we need to weigh less for our health, we commit to making a change.  Six weeks later, there will be gym memberships that go unused and trips to the store for the super-premium ice cream.  In short, in six weeks, over two-thirds of us will have given up on the idea that we’ll lose weight and resign ourselves to another year of wishing rather than doing.

The problem at the heart of the failure is a conflict in what we want.  Sure, we want intellectually to be skinnier or healthier, but emotionally we’d rather not have to do the work to exercise and instead be able to reach for the ice cream scoop when we’ve had a bad day or a difficult conversation.

The conflict between our stated desire of weight loss and our unstated desire for comfort prevents us from making the change that we say that we want.  Instead of shedding pounds, we scratch our head as we stare at the scale wishing it would show us smaller numbers.  Alas, we’ve lost the battle of the bulge for another day and get started with our workday.

We’ve stumbled into an industry association meeting and everyone there is intelligent and hard working.  Many of them come from companies their grandfather started, and they feel like they’re losing the legacy as the business languishes.  They long for the glory days without realizing that they themselves brought them to an end.

When their brain flipped the switch that said they were making too much money – more money than they deserved to make – they started silently self-sabotaging.  It wasn’t big things.  It was small changes that led them, from one decision to the next, to make slightly poorer decisions and reduce the trajectory of the organization to what was more comfortable.  However, what they didn’t realize is that these compound decisions would cause an over-correction and, in some cases, ruin.

The hidden belief was about how much they should make.  What they’re worth.  In many cases, they could see their hard-working father and grandfather slaving over the business every day and never really being able to enjoy the fruits of their labor.  Why, then, should a grandson inherit something that he barely has to work at?  It’s subtle.  It’s also self-sabotage to bring the income down into a range that feels comfortable, and it’s something that many small business leaders have faced at one time or another.

The key to overcoming immunity to change is shining a light on those things that are holding you back.  When you see the factors that lead to poor or conflicting decisions, they lose much of their power.  Knowing that you’re using food to comfort yourself allows you to reframe your goal as comforting.  Knowing that you’re sabotaging yourself and your change initiative allows you to be conscious about the decisions you’re making – and to consciously change your choices so that you can have change success.