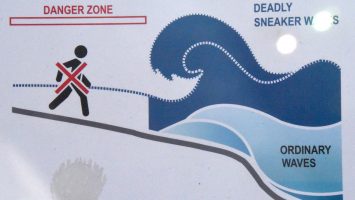 They’re called “rogue” waves.  They have no identifiable cause, and they can be deadly.  They catch people off guard, because they’re not expecting them nor prepared for them.  In Iceland, they’re known as “deadly sneaker” waves.  In change initiatives, they’re the reflected energy of the change, often in harmful form.

Every change you make has both the intended effect as well as many unintended effects.  Sometimes there are effects that are, as you expect, totally trivial.  You decide to change the steps of a process to eliminate time-consuming and wasteful steps, like work done to notify other groups that is seemingly unused.  It’s only after the implementation of the change that you realize the notification had driven some other important process that is now broken.

Sometimes, the ripples are smaller.  People no longer gather around the water cooler before the 8:30 stand-up meeting because most of the work force is working from home.  The impact may be a general loss of knowledge about unrelated projects or an increasing feeling of being disconnected, because they don’t get to hear about one another’s children’s sports activities or the latest antics of the animals.

Even the most trivial changes will have unintended consequences – and most of the time, those consequences aren’t a big deal.

One of the concepts that is being explored for the formation of rogue waves is the idea that they are shaped by the shape of the ocean floor, and geography can focus the energy of waves into a single space, thereby creating a rogue wave with magnitude several times that of a regular wave.  This follows a similar line of reasoning to knowing that, when things resonate, every little bit of power added amplifies the primary wave.

In our change initiatives, we’ve got to be on the lookout for the ripples that may be growing.  Instead of ignoring and expecting that nothing will come of the unintended consequences of our changes, we’ve got to look for the waves – particularly those that seem to be growing quickly.  We’ve got to develop an early warning system that detects problems before they occur.

While there’s no warning system for rogue waves, there is an early warning system for tsunamis that consists of seismographs, sea-level gauges, and buoys.  The system moves from a relatively early signal with low confidence that it will create a tsunami to a clearer message sent by the more detailed buoys and sea gauges.  Similarly, we should be using layers of signals in our change initiatives to identify possible problems and systems capable of ensuring that we’re aware of actual issues quickly.

The first step in the early warning system for rogue ripples in a change initiative is to listen to the chatter that’s happening.  That means listening for people who are describing problems with the change initiative – and focusing on what it is that they’re having problems with.  It’s possible that you knew these problems would happen – or you can learn about new potential problems that were never considered.

For those areas where there seems to be a great deal of chatter about concern, it’s time to invest resources in discovering the extent of the problem.  Is the problem a frustrating hassle or an organization-ending problem – or somewhere in between?  Quantification can be done by examining the business impact or by surveying everyone directly about the problems.

With listening and quantification comes a response.  In most cases, the issues, while undesirable, aren’t particularly problematic.  For those that are, you’ll need to catch the ripples and address them.  While not easy, at least they won’t capsize your change initiative – if you catch them quickly.