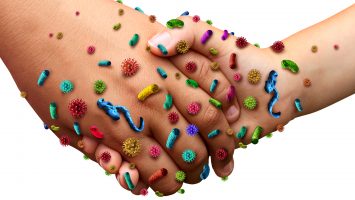 It’s not a secret that germs and other pathogens exist.  Everyone is taught in elementary science or health class about Ignaz Semmelweis and how he discovered that washing his hands helped mothers and babies to be healthier.  Some of us even got the extended version, which explained how he would go from dissecting dead bodies to childbirth – without washing his hands.  If everyone knows that they should wash their hands, why don’t they do it, and what can we do about it?  The problem seems to be in the way that we process information.

It’s a funny name of a part of the brain that controls our sleep-wake cycle.  The reticular activating system (RAS) is the part of the brain responsible for determining which things to pay attention to and which things can be safely ignored.  You can see it in action in your life when you plan to buy a new car, and suddenly it appears that everyone else is driving the same car as you.  Before you considered that car model, you probably have no memory of anyone driving that model of car.  Your RAS changed the importance of the car model, and suddenly it appeared from the noise around you.

Consider the other direction of the dial by remembering when you were first learning to drive and how much of your attention it commanded.  You could be totally focused on driving – or perhaps should have been fully focused on driving – because everything had to be consciously evaluated for its degree of importance.  Every rattle, dial, and indicator was a potential threat, and you evaluated as such.  Over time, the RAS recognized that the minor things weren’t threats and you began to build pattern recognition for things which were and weren’t important.

The problem is that healthcare providers don’t have personal experience that their handwashing or lack of it has any impact on patient outcomes – and as a result, the RAS begins to classify it as unimportant.  But it is important.  They know if they fail to take immediate action for someone with a heart attack, they’ll die.  There’s no such short-timeframe cause and effect relationship with handwashing.  It takes a long time and it’s rarely clear that a failure to wash hands was the cause.

More than any other effort, the National Institutes for Health have been trying to solve the handwashing problem.  Research proves that it does have an impact on patient outcomes – but not generally in a way that makes an impact to people personally.  There have been hundreds of studies that have manipulated variables in an effort to increase compliance rates – and it’s still painfully low.

Alcohol-based hand sanitization was added to the inside and the outside of patient room doors to get providers to use it in both directions.  Reducing the barrier to access to the desired behavior helps – but not all the time.  Lights, signs, and other reminders have been designed to trigger the novelty effect of the RAS with the predictable reduction in efficacy over time.  The RAS treats new, novel stimulus as important.  The problem is that it quickly recognizes the stimulus as normal and therefore it ignores it.

Ultimately none of the approaches that have been taken have got our compliance to 100%.  In the United States, it’s estimated that only 50-80% of the time do providers wash their hands when they know they should.  Worldwide, the number is closer to 20%.

Complicating the problem of not having direct, emotional experiences to trust that handwashing is important is the fact that it’s a secondary task.  When flying a plane, a pilot can use a checklist.  Atul Gawande explains in The Checklist Manifesto how the same approach can improve healthcare outcomes.  However, that presumes that the primary objective is well known and the secondary concerns – like handwashing – can be added to the checklist.

Too many interactions don’t and can’t have checklists.  We can’t elevate the secondary task of washing hands to the level of importance of evaluating and treating the patient – no matter how much we should.

In our change efforts, this means that we need to consider how the behaviors we want to change are secondary to the task they’re doing and how as long as they remain secondary, they may be difficult – if not impossible – to change.  Ideally, we’ll find ways to change or support the primary behavior in a way that makes the secondary behavior natural.