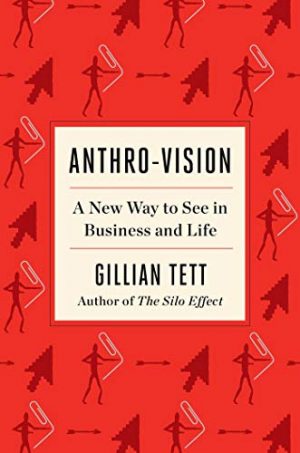 It sounds vaguely like a superpower.  It’s “Anthro-Vision – the power to see things the way they really are.”  However, that’s exactly what Gillian Tett is proposing for our everyday non-superheroes.  Anthro-Vision: A New Way to See in Business and Life is the application of anthropological ideas and approaches to help us see the things in life that we often overlook and, perhaps more importantly, to develop greater understanding and empathy for others.  Unlike the superhero version, it takes work, and also unlike the superhero version, it’s real and it’s real powerful.

What does the study of distant cultures and societies have to teach us today?  As I explained in my review of The Ethnographic Interview, the same skills can be applied to those who seem strange to us but who live next door.  The intellectual framework of anthropology tells you to question your assumptions and to be just a bit skeptical of what you do – and do not – know.  This framework helps us see what others are missing – what they’re blind to.

It also helps us avoid the kinds of problems that Lauriston Sharp found with the introduction of steel axe heads to Stone-Age Australians.  Published in 1952, the article “Steel Axes for Stone-Age Australians” explains that the material advance caused a breakdown of society.  Had someone realized the social relationship between the elders who owned the stone axe heads and the young men and women who borrowed them, needless suffering could have been avoided.  (See The Diffusion of Innovations for more.)

How many times do we introduce something to the world with no idea how the world will respond or even how they might approach it?  Sherry Turkle in Alone Together offers her concerns about a world connected by technology making us feel less connected.  It’s an anthropological framework that helps us understand – and thereby minimize – tragedies.

I see echoes and reflections of anthropology in other disciplines.  Design thinking (See Design Thinking), human-centered design (See The Art of Innovation), and user experience (See The Elements of User Experience) are all related approaches that seek to eliminate preconceived notions and start by a deep understanding for those who are being served.  The work of visionaries like Gary Klein, particularly in Seeing What Others Don’t, exposes us to the back half of the anthropological approach – that is, the sense-making process.  Even Dave Snowden’s Cynefin decision framework relies upon the ability to see the situation clearly before designing solutions.  Horst Rittel’s wicked problems came out of the study of urban planning – the same kinds of cultural problems that anthropology seeks to understand in what often feels like a chaotic world.  (See Dialogue Mapping for more on Rittel’s work)

Tett quotes Victor Turner who uses a concept of “liminality,” drawing on the idea that most cultures employ rituals and symbols to mark transition points.  I’d extend this further to Arnold van Gennep’s work on Rites of Passage and how we signal our transitions between stages of life with rites of passage.  While Eric Erikson is best known for his work charting the development of children, particularly in Childhood and Society, he wasn’t focused on the rituals (rites of passage) that we use, because his focus was more inward development than outward signs.

However, it would be an error to ignore that the way that we recognize and celebrate rites of passage are important to our psychological development.

A Lesson from the Jesuits

In a world where religion is often filled with immutable rules, rituals, and customs, the Jesuits seem to have found a way to separate the essential parts of their beliefs from the non-essential.  According to Chris Lowney in Heroic Leadership, they were able to adapt to their environments by demonstrating the principles they believed in without getting caught up in the customs that weren’t connected to their core beliefs.  When you needed to dress differently to fit in and be accepted, that’s what you did.

I’m reminded of this because the Jesuits had to question everything about their faith and strip all the unnecessary assumptions.  They had to see ways that their habits were getting in the way of their mission to bring the message of Jesus to everyone on the planet.

Side stepping the question of the religion and simply evaluating their behaviors and outcomes, their results are impressive.  The founded universities and they lived in harmony with people of different beliefs.  They had to be – in essence – anthropologists.  They couldn’t judge others by their strange customs but instead had to learn them and, if they didn’t conflict with their core beliefs, accept them.

It’s a cold day, and you decide to go for a walk in the local indoor mall.  Which side of the hall do you walk on?  Most of the world answers on the right.  They instinctively do it.  They wouldn’t have thought about it had you not asked.  However, those in the United Kingdom and New Zealand, who drive on the left side of the road, instinctively try to walk on the left side of the mall’s enormous halls.  There’s no rule for this, but it just happens.  It’s a hidden assumption.

You’re a guest at a home in the Midwest of the United States, and you clean your plate.  Your host is pleased, because it signals to them that you were happy with your meal.  The next week, you’re in an Asian country in another host’s home.  You clean your plate, and the host seems subtly frustrated, continuing to ask you if you want more food.  You politely decline.  Your host is offended – and you don’t know why.  What you don’t know is that it’s customary to leave a small amount of food on your plate to signal to your host that you’ve had enough food.  In one context, you’re being a polite guest; in the other, you’re being rude – without even knowing it.

The point of Anthro-Vision is to be able to see these cultural differences, assumptions, and hidden meanings that exist in ways that we don’t realize.

There are some things you just don’t discuss – in polite company.  Depending upon where you were raised, it might be sex.  It might be money.  It might be bodily functions.  The familial, organizational, or social norms may make it rude to discuss such topics.

However, as an outsider, it’s possible to ask the questions that others can’t ask.  You’re given special grace, because everyone is clear that you don’t know the rules.  It’s sometimes the kind of break that it takes to make things more discussable.  A factor that begins to open doors is that once others realize you’re talking to others in their “in” group about topics they can’t talk about, you’ll be invited to talk to them.  It can create some pull towards getting the interviews you want.  (See Dialogue – Defensive Routines, and Organizational Traps for more about undiscussable topics.)

Espoused Beliefs and Beliefs in Practice

It doesn’t make sense.  What people are saying about the way that their lives work doesn’t match the outcomes.  They say they believe in using less water, but they are endlessly watering their lawns.   The water usage is indicated as high, and people reply to surveys that they’re very water conservation focused.  The real reason may be that they don’t understand how their behaviors are impacting the situation – or it can be that they have a competing belief.  There may be something that’s even more important than water conservation to them.

Immunity to Change encourages us to look for these places of inconsistency and ask why.  Steven Reiss in Who Am I? and The Normal Personality encourages us to look where motivators are in conflict and figure out which motivator is holding back the behavior that we want – and that the person espouses.  Anthropologists simply watch what people actually do and then ask them why.  It’s a pragmatic approach that helps to resolve the discrepancy between the quantitative results and the beliefs that we have about how people will behave based on what they’ve told us.  (You may find The Largest Gap in the World – Between Saying and Doing useful when you can’t reconcile what people say and what they do.)

All Problems are Human Problems

William Isaacs in Dialogue describes four pathologies of thought, the first of which is abstraction.  Tett explains that the financiers at the heart of the financial system meltdown didn’t speak in stories of people or include pictures of them in their presentations.  They had abstracted themselves from the individuals who were taking out loans and trying to pay them back.

There’s this nostalgic view of the past where crime didn’t exist, and no one locked their doors.  The perception today is that we must protect our children from murder, violent crimes, abductions, and more.  However, the problem with both of these perceptions is that they’re simply not true.  The statistics compiled by LetGrow from the FBI, Pew Research, Bureau of Justice Statistics and others don’t support this perception.  The murder rate isn’t materially different than 1960 – and are roughly half of what they were in 1990.  In short, the real rate hasn’t changed.  The quantitative analysis is net-zero.

However, the qualitative view is that parents are substantially more afraid of violence against their children than their parents were.  The belief is that the world is more dangerous, and therefore children can’t be allowed to go out like they used to.  The result is that their children are escaping into cyberspace, where they’re free to meet others and hang out.  America’s Generations describes how millennials were helicopter parented because of parental concerns about their safety – irrespective of reality.

What did change about violent crimes was our awareness of them.  The rise of television, news, the internet, and pictures of missing children on the walls of Walmart left us believing that the prevalence of the crime was much larger, because we were hearing about it more.  The results were overprotected children.  The Coddling of the American Mind explains the outcomes that we get with children who were coddled and overly protected.

My favorite part of the book is where Tett explains that she had an ex-boyfriend complain she was a terrible person to go on vacation with, because she treated it like fieldwork.  It’s my favorite, because she gives a cry for all of us: “I treat life like fieldwork.”  I can’t think of a better way to live life – always curious, always learning, always questioning.  Maybe that’s what has allowed her to develop her Anthro-Vision – and what can lead you to develop yours.