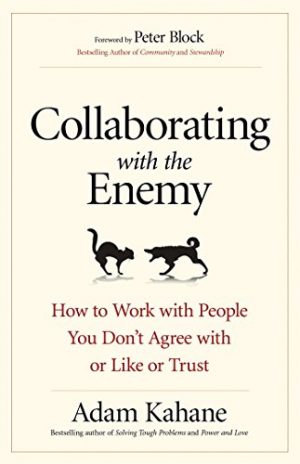 One of my favorite things to do in a presentation on collaboration was to ask people to define it. I’d offer up the idea that, much like trust, they probably thought they knew what it was that collaboration meant – right up to the point where they’d try to define it. Though, often, my audiences would come up with something like “work together towards a common goal,” they’d often miss an alternative – “to conspire with the enemy.” Collaborating with the Enemy: How to Work with People You Don’t Agree with or Like or Trust combines these two definitions and explores a fundamental misconception about how we perceive collaboration in organizations and across society.

The belief that we understand something so fundamental to our humanity like collaboration only to discover that we’re deceived by our thoughts isn’t unique to collaboration. Robert Flores and his colleagues surface this problem with the concept of trust in Building Trust. They explain that we’re flummoxed when asked to define trust and often define trustworthy instead. Trustworthy and trust are two sides of the same coin but are also very different.

Jonathan Haidt explains in The Righteous Mind that the reason we’ve become the dominant biomass on the planet is likely because of our ability to work together. Others have suggested that our ability to work with one another is nothing short of Mindreading, but there’s more to it than that. Not only can we see what others are thinking, we must find ourselves working together towards a goal that we both agree with – or at least are willing to work together towards.

We assume therefore that, to work together, we must agree with, like, and trust others when we know that this isn’t the case. We find the definitions that seemed like opposites are not, in fact, opposites but rather two characterizations of the same phenomenon – working together towards a common goal, often with someone that could be considered an enemy.

Working with the operating assumption that we like, agree with, and trust those whom we’re working with, we can incorrectly conclude that collaboration can be controlled. We believe, erroneously, that everything can follow a neatly scripted plan despite our experience to the contrary. While J. Keith Miller explains in Compelled to Control that we all want to control, we must acknowledge that too few things are actually under our control. Forces and other people have influence on our lives and our circumstances that limits our ability to control.

The Halo Effect explains that our world is probabilistic. That is, A+B=C, but only 80% of the time. In such a world, we can’t believe in control. Superforecasting makes the point that those who are best at predicting outcomes recognize the probabilities of certain events happening and aggregate those into a set of probabilities around various outcomes. We cannot ignore the fact that randomness exists in the world and our ability to control outcomes is limited.

To succeed at collaboration, we can’t minimize or ignore the role of complexity in our work. The Cynefin decision framework is designed to expose a model for understanding the various kinds of decisions we must make and the degree of complexity or chaos inherent in the impacted systems. (See Thinking in Systems for more on systems.) Too often, we misjudge the collaboration efforts that we’re doing as mundane, predictable, and ultimately controllable. We fail to realize that collaboration lies at the very heart of our humanity and that it is, at some level, both magical and illusion.

We scoff at those who say they can read our minds. We know that true mind reading is beyond our capabilities. We are disturbed by the degree to which our microexpressions may expose our inner emotions. (See Telling Lies for more.) Despite the awareness that we cannot read one another’s minds, we regard collaboration as trivial.

The truth is that our ability to have a “theory of mind” about someone else is unique to our humanity and has many limits. Our brains and their limited capacity take many shortcuts to reach a perception of what is going on inside of others, and it’s often wrong. (See Incognito and The Tell-Tale Brain for more.) In fact, Inside Jokes suggests that laughter is a part of the error checking mechanism for these shortcuts, and it’s why we’re rewarded with dopamine when we recognize we’ve been misled.

In short, we hide the complexity of the process of mind reading from ourselves and trivialize the complex nature of coordinating activity between two or more individuals. In doing so, we fail to recognize that control is an illusion – just like our ability to completely understand someone else’s experience.

When we’re collaborating with others, we’re making change. Our goal sounds lofty, but in some small – or large – way, we’re seeking to accomplish change. The fact that we’re working with others towards the goal almost ensures that the goal is large. Those large goals create change for those impacted, and some of those impacted will be winners while others will be losers – and that is in large part driven by their perspective.

We cannot forget that the common goals at the heart of collaboration may be positive or negative for each person – and that whether it’s a positive or a negative largely depends upon the perspective.

You know that someone isn’t able to see others’ perspectives when they utter the words, “The truth of the situation is…” Instead of being open to accepting that truth is elusive and constantly changing, perceiving it as a fixed and unchanging point makes it impossible to accept that others’ perspectives can contribute to your understanding of the truth. At our best, we recognize that we can’t fully understand the truth. We cannot see from every angle and every perspective to understand our situation in a way that offers the truest representation of the truth.

Defining the truth as the way someone sees it – no matter how good their perspective – necessarily blocks collaboration and development. It stops dialogue.

“Dialogue” is a word we throw around casually as if it were the same thing as conversation. However, dialogue is a special place: it’s a place where we are safe enough to learn and grow with one another. (See Dialogue for more.) Dialogue is essential for our ability to understand others’ perspectives of the truth and how they do or do not line up with our own. We can only agree that someone else can see things differently than we can when we’re willing to create safe spaces that allow dialogue to happen. (See The Fearless Organization for the concept of psychological safety in general.)

Dialogue is not a guarantee that we’ll reach agreement – too often, we won’t. Even if we can address the perspective of the situation, we’re left with the need to agree on the values impacted by the situation. Jonathan Haidt explains in The Righteous Mind that even our morality is based on differing values, which can often come in conflict, and we’ll decide differently based on how we rank the values and how we perceive the situation relates to them. Steven Reiss expands this idea to how we’re motivated in Who Am I?

The key to being able to collaborate isn’t to reach a single understanding and agreement on the objective. In fact, most collaborations are made stronger by multiple overlapping views of why the objective is important. Our goal with working with others shouldn’t be agreement, it should be a willingness to accept others’ perspectives and a willingness to work together despite the lack of agreement. In Fault Lines, we learned that some of the deepest divisions aren’t solved by agreement but instead by a willingness to move forward in the presence of unresolved issues.

The greatest challenge of humanity is the illusion of separateness. We fail to recognize that we’re more alike and interconnected than we could realize. The things that we discriminate against represent a completely insignificant percentage of our overall makeup. We’re all most all genetically identical from a statistical point of view. However, we’re focused on our differences instead of our similarities.

We evolved with an “us versus them” perspective. We learned that we could trust our “us” group and fear everyone that was in the “them” group. (See Mistakes Were Made (But Not By Me) and Trust for more.) The key when we’re collaborating with others is to find a way to draw the “us” circle larger.

Every time you’re tempted to put people or groups in the “them” category, draw the circle larger. We’re all members of humanity, and as such we’re all a part of the same group even if our natural tendency is to shrink the circle and protect ourselves from them.

Control is an illusion, but it’s one we all crave. (See Compelled to Control.) We want control because it makes things simple and straightforward; however, we must accept that things are not that simple. Our world is probabilistic. (See The Halo Effect.) We’re able to influence others but not control them. Joseph Rost explains in Leadership for the Twenty-First Century that we’re all influencing others, and as such we’re all leaders and followers. (Rost’s work is based on James MacGregor Burns’ in Leadership if you want more depth.) We want to lead our collaborative efforts, but we need to do so in a way that is open to being led as well. The beauty of collaboration can be the ability for us to learn and to see the world more realistically.

Ultimately, our goal in collaboration should not be endless debate but rather a series of actions and tests which allow us to continue to calibrate how we work together and our understanding of the goal that we are faced with. We should recognize the wisdom in Deming’s Plan-Do-Check-Act cycle and Rittel’s understanding of the kinds of “wicked problems” that plague the complex actions that we attempt when we collaborate.

It’s Not All About You

In the end, when we collaborate with the enemy, we must release our focus on ourselves and focus our thoughts on the goal and how we’re intending to change things. This keeps us from overreacting to the perceived attacks and open the door to look at our conversations in the most generous way possible. It’s that allows us to do the process that is Collaborating with the Enemy.