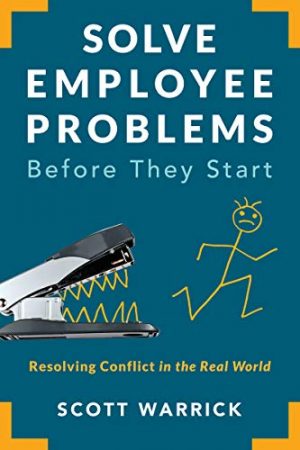 Every once in a great while, you get to experience serendipity – a happy accident.  In this case, we had asked Scott Warrick to review our book, and in the follow up we got to see his latest book, Solve Employee Problems Before They Start: Resolving Conflict in the Real World.  Terri and I have taught conflict resolution for several years, and the opportunity to look at it from another point of view was welcomed.  When you’ve got a chance to look at how another expert looks at the challenges, the smart person jumps at it.  That’s what I did.  Despite the backlog of books coming out of the SHRM annual conference, I read it quickly and found, while there were definite differences in our points of view, the similarities dramatically outweighed the differences.

Early on in our work with conflict de-escalation and resolution, we started with emotional intelligence.  (For more, see my review of Emotional Intelligence.)  We certainly believe that the ability to develop emotional intelligence in employees is critical to changing the frequency with which you’ll need focused conflict resolution skills.  We maintain it as the first set of lessons for every employee in our Discovered Truths program, but, in conflict resolution, we took a step back from it.

The feedback we got was that it is like using a slow cooker to cook a burrito.  Our customers needed something that they could bring to bear directly against the conflict, not a preventive plan that they could develop over time.  However, as Warrick points out, emotional intelligence is a foundation.  If the people you’re working with don’t have a basic level of emotional intelligence, it’s very hard to get to any sort of a resolution.

Like many contemporaries, Warrick pulls from Emotional Intelligence 2.0, Travis Bradberry’s and Jean Greaves’ work.  However, the model he uses for emotional intelligence includes components that aren’t a part of the familiar, four-part model.  He leans on Reuven Bar-On’s emotional intelligence model which consists to 15 scales divided into 5 major areas:

The model is the one that MHS sells as an assessment that is based on Bar-On’s original research. It is an impressive test.  However, while I agree that these skills are important, the definition of interpersonal skills seems nebulous, and the relationship to decision-making skills seems to be unclear.  (See Klein’s work in Sources of Power and Seeing What Others Don’t for how we really make decisions.)

In a follow up conversation with Warrick he and I were able to drill into empathy and how to teach this component of interpersonal skills.  However, my primary concern is the interpersonal skills is in the area of Interpersonal relationships.  I’m not sure there’s a way to assess this in a way that makes sense universally.

More broadly, I struggle with the complexity of the Bar-On model since it creates a level of complexity that I don’t know that most people cannot internalize.  It’s one of the reasons that even though I love Reiss’ work on the basic motivators (See Who Am I?) that I don’t expect people to be able to use it without a productivity aid.

Warrick incorrectly limits the use of CT and magnetic resonance imaging (MRI) technology to structural views of the brain.  In a follow up conversation with him, he made it clear that he’s not talking about functional MRI (fMRI) and that some of the most powerful advances in our understanding of neuroanatomy come from functional MRI (fMRI) systems, which indicate the flow of blood in the brain – indicating a recent consumption of oxygen and glucose.  In other words, it can show what is and isn’t active in the brain.  (See How Dogs Love Us for one way that an fMRI was used to understand emotions.)

He also limits the use of Computed tomography (CT) to structural scans as well, however, computed tomography angiography (CTA) is used to show the flow of blood.  It does this by taking multiple images and comparing the results.  This leads to an understanding of how the blood flows.  At some level, you could consider this structural in that it’s showing the pluming of the body, however, at another level it’s demonstrating the flow of blood through the body – which is one part structure and one part about the way that the body is constricting blood vessels to route blood.

Warrick is a big fan of a SPECT (Single Proton Emission Computed Tomography).  It’s essentially a positron emission tomography (PET) scan that uses substantially lower doses of radiation.  From a numbers perspective the costs for a SPECT seem to be 30% higher than the cost of an fMRI with limited discernable advantage.  fMRIs appear roughly ten times as frequently in research than SPECT.  His comments were that SPECT were more often used in clinical observations and fMRI in research applications, but I couldn’t support this with any data I could find.

There’s also references to the inhibiting function of the left frontal lobe on the amygdala.  This is a generalization based on the famous case of Phineas Gage, who had a tamping iron get driven into his skull, thereby destroying some of his ventromedial prefrontal cortex.  (See The Blank Slate for more.)  There are places where one brain area inhibits or regulates another, but nothing as coarse as is suggested here.  (See The Hope Circuit for a specific example.)

Similarly, there are some conclusions regarding the relative tendencies of humans to be homicidal as compared with the murderous nature of our animal cousins.  Surprisingly, the research here, in general – not Warrick’s — has been awful.  12 Rules for Life points out that humans appear to be becoming less homicidal as time progresses rather than more, as is sometimes reported.  Even simulation models, like those discussed in The Evolution of Cooperation, point towards humans having been successful due to their cooperation – and, at times, the need to punish freeloaders.  Jonathan Haidt reaches the same conclusion through different means in The Righteous Mind, where he attributes our dominance of the world to our ability to “get along.”  The Nurture Assumption speaks about Jane Goodall’s observations of the violence.  The quick summary is “chimpanzees don’t cotton to strangers.”  All-in-all, we’re a violent species, but whether we’re more violent than our primate cousins seems to be subject to some disagreement.

Warrick explains that we have two different factions in our brain fighting for control.  One faction is led by the amygdala and the other by our frontal lobes (or neocortex).  Kahneman explains the struggle in Thinking, Fast and Slow.  Kahneman and Warrick reach the same conclusion that the automatic, lizard, emotional brain, can lie to the neocortex, primate brain.  Further, it’s possible to become emotionally flooded, where the neocortex is effectively taken out of the picture.

Jonathan Haidt’s view is slightly different with his Elephant-Rider-Path model, which has the emotional elephant always in control but usually ceding this control to the rational rider.  (See The Happiness Hypothesis and Switch for more on this helpful model.)

Warrick’s neuroanatomy isn’t precise here.  Recent work indicates that the limbic parts of the brain – including the amygdala – receive a copy of some sensory data that arrives ahead of the data being provided to the neocortex.  (Neocortex means new brain or the primate brain.) This means the limbic portion of our brains can literally react quicker.  Warrick uses a conceptual model like Kahneman’s, where the data is processed by the limbic system and then forwarded to the neocortex – but that doesn’t appear to be technically accurate.  (See Incognito and The Hidden Brain for more about the way that we process signals in our brains.)  Still, the conceptual model is enough to address the point that we can become emotionally hijacked.

The Silent Scourge – The Retreaters

One would think that, in a book dedicated to solving employee problems, the people who were conflict-avoidant would be the heroes.  However, the opposite is true.  Much like how John Gottman explains in The Science of Trust how stonewalling is one of the worst things that could be done to a relationship, so, too, does Warrick believe that those unwilling to say what they’re truly thinking are tearing the culture of the company apart.

The pressure must go somewhere.  When someone doesn’t agree and doesn’t speak, they experience an intrapsychic pressure that needs to be dissipated.  Though it’s technically possible to safely channel this into other outlets, few people do this.  Most either complain to others, thereby creating a culture of talking behind people’s backs and eroding the trust necessary for organizations to function, or they eventually blow up, breaking the feeling of psychological safety.  (See Trustology for more on trust, and The Fearless Organization for more on psychological safety in the organization.)

We mistakenly confuse understanding for agreement, and we can’t agree, because ours is the “right” answer – because it’s ours.  (See Thinking, Fast and Slow and Mistakes Were Made (But Not by Me) for some of the hidden biases that influence us.)  Because we’re so focused on reaching agreement, we don’t make time for understanding.  The truth is we’re afraid that, if we understand the other person’s point of view, we might lose our sense of being right.  Learning – which is what we’re doing when we seek to understand someone – is an inherently risky process, and it’s one that we’ll only take when we feel safe enough.  (See The Adult Learner for more.)

Warrick also explains that it takes a great deal of tact and thoughtfulness to disagree with someone else.  We need to be careful not to attack them and stay focused on the ideas.  We need to reward them with places where we see eye-to-eye or value them.

During this review, I’ve been trying to do just that.  To share where I disagree with Warrick while recognizing the value in his messages and the great value that his book has for everyone that reads it.  If you can find ways to disagree with tact and thoughtfulness, perhaps you’ll learn how to Solve Employee Problems Before They Start.