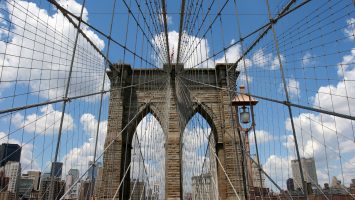 The Brooklyn Bridge, while not anonymous, isn’t nearly as famous as other bridges, but it does hide a secret.  It was constructed with faulty steel cables.  The faulty steel cables weren’t discovered until it was too late to replace them.  As a result, they remain in the bridge today – and the bridge is still safe.

Most change methodologies and approaches assume that you’ve got a greenfield to start from.  That is to say that the project hasn’t been started, and you can do things “right the first time.”  Brownfield projects assume that someone has been there before you, and the ground has already been disturbed.  These projects can be more difficult, because it’s not always possible to undo the damage that has already been done – like steel support cables being run that aren’t the appropriate strength.

More of the Same

In the case of the Brooklyn Bridge, the answer wasn’t to replace the wire that had already been run.  Instead, it was to spin additional wires around the defective wires.  An additional 150 strands of wire were added to provide the additional required strength of the main cables.  In short, it wasn’t something different to complete the Brooklyn Bridge, it was more of the same.  When we’re recovering a failed change project, our work is largely an amplification of the steps that we should be doing for any project.

One of the important aspects of recovery is walking the line between transparent communication about the limitations of the current state of the change project and not allowing blame to develop.  Dennis and Michelle Reina explain in Trust and Betrayal in the Workplace how communication trust is as important as contractual and competency trust.  However, as Amy Edmondson explains in The Fearless Organization, we must be sensitive to make the environment safe for everyone – even those who have made mistakes.  There are undoubtedly difficult conversations – the kind called out in Crucial Conversations – to be had, but they need to be had in a way that allows people to save face and simultaneously admit their mistakes.  As Mistakes Were Made (but Not by Me) explains, when we aren’t able to accept responsibly, we create larger problems for everyone.

After the Change Success

When it’s all done and the change has been successfully implemented, it’s time to take the step back to identify the systemic failures that led to the project getting out of control in the first place.  The After Action Review process is a blame-free way to figure out what happened and how to prevent it in the future.