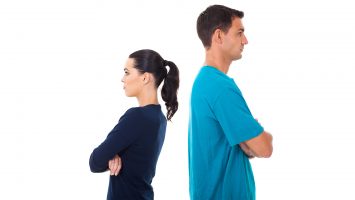 Why You Can’t Make Them Change Their Mind

As a change professional, it’s my job to help people change their behaviors.  It’s my job to get them to change their mind.  I’m supposed to help smooth over fears and focus on the benefits of the vision.  However, when it comes to changing the minds of my friends and family, I feel like I fell well short of effective, and I’m not alone.  We face people on opposite sides of tough issues – like whether to vaccinate against COVID-19 or not – and no matter how clear I believe the signs are, I must admit that there’s always a potentially opposite argument to be made.

What You Focus On

If I want to emphasize the need to get the vaccine, I’ll share how it probably has more research done on it than any vaccine in history.  I’ll cite improvements in communication and information processing resources that have made it possible to more carefully study results and impacts in ways that have never been done.  On the other side, if I’m concerned about the vaccine and wish to dissuade people, I’ll speak about the breakneck speed at which it was developed.  I’ll talk about the fact that we don’t really know the long-term consequences.

The truth is that it’s not that one of these is right and the other is wrong – they’re both right, and the forces point in opposite directions.  Kurt Lewin first conceptualized force fields that lead people towards or away from another psychological state – including action (see Principles of Topological Psychology).  In the spirit of chaos theory and Lorenzo attractors, he recognized that when powerful conflicting forces exist, it’s difficult to predict the outcome.

Steven Reiss was a bit more pragmatic in identifying 16 basic motivators that he felt drove behavior.  By mapping the intensity of the motivator and the individual’s need for that motivator, you could come up with a clearer picture of how they’d behave.  (See Who Am I?)  Jonathan Haidt explains in The Righteous Mind how people can be moral but view the six foundations of morality differently and thus reach different conclusions based on the same data.

In short, we need to know what motivates people and what their values are if we’re hoping to convince them of anything.

I first heard a friend say, “It’s not paranoia if the world is really out to get you.”  It was meant as a joke, but I have to say that we have a world that seems designed to instill paranoia into us.  If I wanted to further the anti-vaccination point of view, I’ll extend the conversation into the untested nature of the approaches used by the vaccines or the rumors about microchips, changing my DNA, or one of hundreds of other ideas floating around the internet about how the vaccine is a plot.

The trick to the paranoia is that, for the person, the paranoia is their reality.  A Beautiful Mind is a great movie about John Nash and his struggles with schizophrenia.  Like The Sixth Sense, the movie proceeds from the point of view of the main character until it’s revealed that they’re seeing things others aren’t.  While, in the film, Nash worked out a way to ensure people were real, it took this logical trickery to ensure that he didn’t descend into a delusional episode again.

At one level, it should be easy enough to validate the facts – except if you believe that there’s a conspiracy to harm you, the question becomes who do you trust?  The fundamental question is a favorite plot device in many action and suspense thrillers.  Why should someone – even someone you know well – trust you if you may have already been converted to believing the lie?  Maybe they need to convince you that you’re the one who’s delusional.

There’s a reason that you’re not successful at changing others’ strongly held beliefs – and it doesn’t necessarily mean that you’re a bad change manager.  It can be that some of the forces that you’re facing are difficult to fight.  Strangely, the path to getting others to change may be to be willing to change yourself.