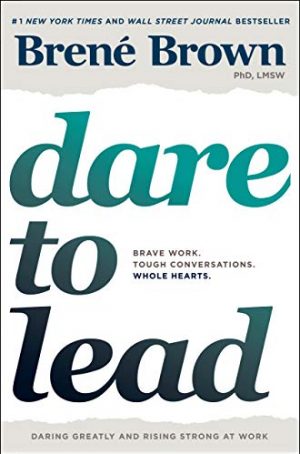 Leadership isn’t easy. It’s difficult, because leadership requires a great deal of strength. I don’t mean lift-a-car-off-a-child sort of strength. I mean the kind of strength to both understand who you are and be who you are. Brené Brown’s latest book, Dare to Lead: Brave Work. Tough Conversations. Whole Hearts., brings her work on shame and vulnerability directly into the path of leadership today.

A Brief History of the World

Because I’m familiar with Brown’s work and leadership in general, it feels like I’ll need to put some pieces together to make this review a bit more readable. To that end, Brown’s written several books – all of which I’ve read. The books she’s written are:

The evolution of her work becomes apparent when you look at the list of books in chronological order. The work expands from an individual becoming more whole to how that growth impacts others. She moves from how we must show up individually towards how we must show up with others. Dare to Lead is about how leaders must become more whole to be able to support and lead others.

The themes of Brown’s work are shame, vulnerability, courage, connection, empathy, and what she calls “wholeheartedness” – something that fits somewhere between the ways that I describe courage, integrated self-image, and stable core. (See my review of Braving the Wilderness for more about this.)

One of the key topics that Brown returns to in her work in general and in Dare to Lead is the topic of vulnerability.

There have been many attempts to define leadership, including Burn’s simply titled Leadership, Rost’s Leadership for the Twenty-First Century, Greenleaf’s Servant Leadership, Goleman et al.’s Primal Leadership, The Arbinger Institute’s Leadership and Self-Deception, Lowney’s Heroic Leadership, etc. Brown’s definition of a leader is “anyone who takes responsibility for finding the potential in people and processes, and who has the courage to develop that potential.” This perspective matches that of Wiseman’s in Multipliers as well as many of the titles above. At its core, most scholars and authors view leadership as a service to those that are being led.

One of the funny things about courage is that the people most proficient at it don’t think about it as courage or abnormal. Courage is defined as the ability to proceed in the face of – or despite – fear. From the outside looking in, the people with the greatest courage display no fear – but the fear is still there.

A definition of courage is useful to be sure. However, the definition only allows to people to speak about something and understand each other. It doesn’t help them learn how to get more of it. Understanding that courage is moving despite fear doesn’t cause you to identify specific, key behaviors that allow you to recognize it in others.

If those who are being courageous don’t even expose the key condition – fear – what chance do we have for identifying courage in the workplace and in our lives? Perhaps that’s why “just over 80 percent of leaders, including those who believed that courage is behavioral, couldn’t identify the specific skills.”

Brown’s call for courage makes sense, particularly in the context of Amy Edmonson’s work on creating organizations with high degrees of psychological safety as discussed in The Fearless Organization. While Edmondson focuses on increasing the safety, I explain in my review that the positive organizational effects may have more to do with courage than being psychologically safe.

Psychological safety reduces the size of the fear and makes it easier to be courageous. But, ultimately, there are so many non-work factors that influence our perceptions of safety that it is incomplete to focus only on psychological safety inside of the organization.

In this, however, is the truth that, the lower you make the fear bar, the easier it is for people to have the courage to step over it. If we want to increase courage in ourselves and those that we work with. then perhaps the best solution is to increase the perception of safety. (See Trust => Vulnerability => Intimacy, Revisited for more on the role of perceived safety.)

It’s good to expect excellence from yourself and those around you, but excellence can sometimes turn into perfectionism. That can set us up for a misunderstanding of our value and the value of others around us. Excellence keeps us striving for the best. Perfectionism expects nothing but the best.

The subtle distinction between being on the journey towards perfection and expecting that we’re already there is a big difference. In my review of Changes That Heal, I explained how, during a trip to Mt. Rushmore, I encountered setbacks but accepted the journey was a good one. By focusing on the journey, I could enjoy what I was getting – rather than being frustrated with what was missing. I sought the perfect trip – instead, all I got was a great one.

It was The Paradox of Choice that made me aware of Herbert Simon’s work on the difference between maximizing – looking for the absolute best – and satisficing – looking to meet standards and then stopping. The key here is that this is done on a decision-by-decision basis. However, what you get when you convert maximization to a personality trait is perfectionism. The good news is that maximizers tend to make more money and objectively have a better life. However, the bad news is that they’re less happy. That’s a problem. Something about maximizing – or perfectionism – primes you for regret and makes you less happy.

This is a barrier to fully living, because it prevents us from taking chances and failing. Instead of taking risks, we spend all our time playing it safe. As a result, we’re not vulnerable, and we’re not the employees and leaders that we can be.

We all want to be Tigger, but we’re designed to be Eeyore. Things can be going great. We can have everything in the world to celebrate, but we’re worried about when the other shoe is going to drop. Certainly, there’s got to be something wrong somewhere. It stops us from fully celebrating our successes.

Daniel Kahneman in Thinking, Fast and Slow explains that we experience negatives more strongly than we experience positives. It seems that evolution has made us wary. Evolutionary theorists believe this was because those who had more caution tended to survive longer to spread their genes. So, basically, we’re all descended from the Eeyores of the world, and we’re trying to behave like Tigger.

Gratitude Is More Than Attitude

There’s a pithy cliché that says, “Gratitude is the attitude.” However, it shouldn’t stop there. Gratitude without action is like joining a gym and not going. You may feel better for a while, but things ultimately aren’t objectively getting better.

Certainly, the starting point is to get an attitude of gratitude. It’s hard to be empathetic and compassionate for others until you have become grateful for your circumstances. However, having gratitude and not acting on it is like having empathy for someone’s condition but stopping short of a compassionate response.

Compassion includes a desire to alleviate another person’s suffering. You can’t have compassion without the actions that move forward to alleviate that suffering. Gratitude may first be an attitude, but how does it inform how you respond to the world. How is it that you choose to behave because of your gratitude?

I’m not a fan of antidepressants. Not because I don’t believe that they can’t help some people sometimes. It’s because I know they’re overused and their efficacy is questionable. (See Warning: Psychiatry Can Be Hazardous to Your Mental Health for more.) There’s another problem with most antidepressants. The problem is that they tend to flatten out moods more than they lift them. That is, people on SSRIs and other antidepressants tend to not enjoy the highs as much as they did. It’s true that they may not sink as low, but they don’t soar as high either.

It’s not just antidepressants that have this effect. No matter what the drug or behavior is that’s being used to numb painful emotions – even suppressed, painful emotions – it tends to take the peak experiences away, too. The alcoholic may be able to forget the tragedies they’ve seen or done, but the consequence of this is the persistent fear of being discovered or the memories flooding back. That means that even alcohol robs the alcoholic of the joy in their lives because they’re waiting for the other shoe to drop.

Based on everything we know about how the brain and emotions work, there’s no way to selectively disable the emotions that relate to pain, anguish, and struggle. (If you’re interested more about how emotions work, see How Emotions are Made.)

No one really likes to be held accountable. I mean, let’s face it: it’s criticism when we don’t do what we said we were going to do, and no one likes to be criticized. One response is to just not hold people accountable. However, this sets off a series of events that leads to people not valuing each other or honoring commitments. It’s a sort of cancer that eats its way through the trust of the organization and, ultimately, can bring the organization down.

While no one likes to be held accountable when they fall short, to not do so creates a set of long-term consequences that lead to organizations no one wants to be a part of.

Trusting Others, Trusting Ourselves

One of the truisms about trust is that we view others like we view ourselves. If we’re generally trustworthy, we’ll assume others are as well. Learning to trust ourselves gives us the possibility of trusting others more. In trusting others more, we enrich not just our own lives but theirs as well. If you trust yourself enough, you can learn how to Dare to Lead.